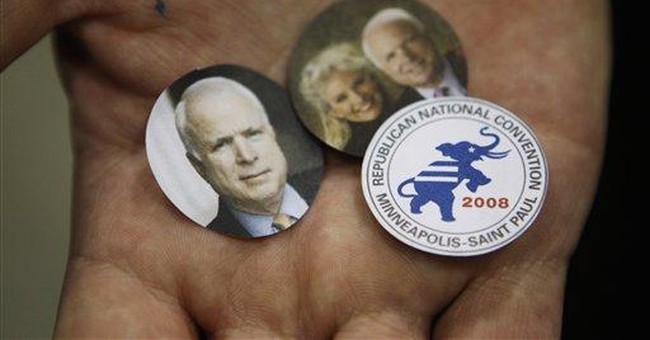 ST. PAUL, Minn. -- The American Right has just died and gone to heaven.

Last night's convention address by Sarah Palin here in St. Paul has confirmed the bold decision of John McCain to choose the Alaska governor as his co-pilot and united the Republican Party as it has not been since the second term of Ronald Reagan.

A wild enthusiasm for Sarah Palin has brought conservatives home to John McCain, and GOP leaders of all hues -- from Fred Thompson to Mitt Romney to Mike Huckabee to Rudy Giuliani -- to the rostrum to lacerate the liberal media for their five days of feral assaults on Sister Sarah.

The war the right lives for, against the people the right truly loathes -- the liberal media elite who savagely "Bork" every true conservative who gets on the path to national power -- has been reignited.

Positive polarization has been achieved. The Republican Party has been united and invigorated. The enthusiasm gap with the Democratic ticket has been closed. And the issues upon which the base loves to fight -- the Culture War and Right to Life -- are back on the table.

Palin's beautifully crafted and delivered acceptance speech, after Rudy's gleeful excoriations of the pretensions of Obama, will rank as a night to remember in convention history.

Yet, as the familiar battle lines form up for the delicious eight-week war that lies ahead, one hears a distant thunder. And the seriousness of the hour we are in comes home.

U.S. troops have crossed into Pakistan to attack Taliban and al-Qaida units in the privileged sanctuary of the tribal areas just across the border from Afghanistan. Have we just thrown a rock into the biggest hornet's nest on earth?

How will the Pakistani government and people react to this U.S. incursion into their country to fight a war their own army has been reluctant to wage? How will the tribal peoples react? Will the weak new democratic regime, united only in its hatred of deposed President Musharraf, fall?

What is the future of this Islamic nation of 170 million, with its five-dozen nuclear weapons, that was once America's great ally in South Asia, but is now seething with anti-Americanism?

In Afghanistan, the Taliban move closer to the capital Kabul as hardly a day goes by without U.S. armed forces being charged with the accidental killing of Afghan women and children. Is this even a winnable war, after seven years of fighting? And, if so, at what cost?

While the convention hears claims of victory in Iraq and an early return of U.S. troops, there are reports the Nouri al-Maliki regime, in collusion with Iran, wants the Americans out to settle accounts with the U.S.-sponsored Sunni militias and the Kurds over who rules in Baghdad and Kirkut.

Is the end of America's long and costly war in Mesopotamia to be an Iraq incorporated into a Shia crescent led by Tehran?

Arnaud de Borchgrave reports that Israel, having supplied Mikheil Saakashvili's army with weapons and training prior to his invasion of South Ossetia, had hoped to use Georgian airfields to fly strikes against Iran. The Russians are said to be furious and considering new military aid to Syria.

Now one reads of Dutch intelligence agents, who had infiltrated Iran's nuclear program to sabotage it, being withdrawn, as the Dutch believe a U.S. strike on Iran may be imminent.

Vice President Cheney is in Tbilisi promising $1 billion in new aid, as Prime Minister Putin of Russia is asking why, if this aid is humanitarian, it is being brought into the Black Sea in U.S. warships.

In Moscow, President Medvedev and his foreign minister are talking of a Russian sphere of influence like the one the United States has demanded for two centuries with its Monroe Doctrine -- a sphere from which all foreign military blocs and foreign troops are to be excluded.

This is a direct challenge to administration and neocon plans to bring Georgia and Ukraine into NATO. John McCain may declare, "We are all Georgians now!" -- but, are Americans, or Europeans, truly willing to go to war with a nuclear-armed Russia to keep Joseph Stalin's birthplace under a regime led by an erratic hothead who launched what may be the dumbest war in history, which he lost within 24 hours?

In June of 1914, a powerful flotilla of the Royal Navy was anchored in the German port of Kiel on a friendly visit where British naval officers visited German warships on the invitation of Adm. Von Tirpitz, and the Kaiser himself inspected the great new British battleship George V, in the uniform of a British admiral.

The festive occasion was interrupted and ended by news of the assassination of the Austrian Archduke Francis Ferdinand in Sarajevo in the Balkans, where neither British nor Germans had vital interests.

Six weeks later, the two nations had plunged into the bloodiest war in history. Today, as Republicans celebrate the last hours of a hugely successful convention, and Democrats seethe at the hiding they took, are we as a nation drifting inexorably for new confrontations and larger and wider wars?

Who is minding the store, as we party in St. Paul?