Pamela Whitehead
|
Posted: Apr 28, 2020 12:01 AM
Share   Tweet
The opinions expressed by columnists are their own and do not necessarily represent the views of Townhall.com. 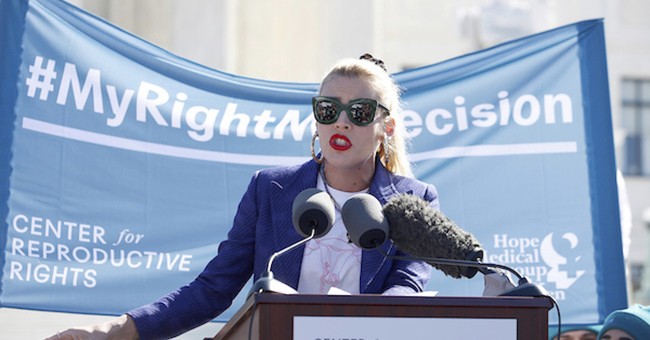 The COVID-19 pandemic has created a whole new crisis for women who are pregnant. Many women who had made a decision to have an abortion were diverted by executive orders from their state governors in the recent weeks. They made an appointment only to be told they had to wait days or weeks. Some went to neighboring states, others just waited and others chose to continue their pregnancies. The abortion industry was up in arms over these orders. After all, abortion is how they make their money. No access equals no money.

But is access to abortion really the crisis? Is pregnancy a crisis? Oftentimes both sides of the abortion debate refer to a woman who finds out she’s pregnant and does not want to be as dealing with a crisis pregnancy or an unplanned pregnancy. It can seem like a crisis. And a lack of access to abortion, to choosing a way out of that crisis, could seem like an immediate need that must be met.  I do think women facing these kinds of pregnancies are in need of some immediate help - and abortion isn’t the right kind of help. Access to abortion isn’t the answer either.

I run a ministry called Loveline that helps women with rent, utilities, transportation, food, and baby items. Calls to Loveline have significantly increased since access to abortion has been restricted. And we’ve met these women where they are, helped them with their immediate needs. Suddenly, the crisis was eliminated with just a little help and they are empowered to continue their pregnancy.  What if they reached out to us before they chose abortion - imagine the impact our assistance could have.

So many of these women need this financial assistance and we are providing this help with the donations received from our supporters. But some of these women feel like they have no support in their life - no emotional support. They are lonely and feel hopeless and bringing a baby into their situation is overwhelming. The easiest - and the most accessible answer-  is abortion.

How can that be? In the recent years, the abortion industry has proclaimed that access has been hindered. Yet, for many of these women - over a million a year - access is not an issue for this elective procedure.

I live in Texas where Governor Greg Abbott gave an executive order to halt all non-essential services including abortions during this COVID-19 pandemic. The abortion clinics sued our state government, got a temporary restraining order and the court upheld the Governor’s order. Just recently, the ban on abortions has been lifted.

During the time the ban was in effect, I was out on the sidewalk in front of the abortion clinic in Houston, praying, counseling women seeking abortions, and reaching out to abortion workers. I watched as over 40 cars entered the parking lots and filled all the spaces, despite a pandemic. I watched as the first woman exited the clinic, still under the influence of medication and unable to walk without assistance, enter the passenger side of her support person’s vehicle only 40 minutes after the abortion doctor entered the building. I looked on as women continued to exit that back door 10 minutes apart, six in one hour. Some of them were crying as their partner drove them out of the parking lot and others were covering their face.

It’s heartbreaking being out on these sidewalks, watching women in physical and emotional pain leave the abortion clinics. The weight of the burden of an unplanned pregnancy for these women is crushing. When the default for women in untimely pregnancies is abortion, access to abortion isn’t the problem.

The Planned Parenthood in Houston has stated that they are preparing for an influx of women seeking abortions since Gov. Abbott lifted the restrictions on abortion. Women will be able to access abortion.

I’ve seen women change their mind about abortion almost instantly after learning there is help out there for them, that someone is one their side, not just with baby clothes and diapers, but someone who gets in their mess with them, walks with them, and shows empathy and compassion. They need to be seen, heard, and listened to. Abortion clinics don’t do any of that. Their main goal is to commit as many abortions as physically possible within a certain time frame. There is no real counseling that happens inside abortion clinics. It’s a complete farce that the abortion industry cares about women.

I’ve been offering real help to women at abortion facilities in Houston for eight  years. I’ve seen hundreds of women take this help, choose life for their babies and turn around and help others. Recently, a woman that I encountered in October of 2018 at Houston Women’s clinic shared her son’s first birthday pictures with me! He is her sixth child and she says that her family would be incomplete without him. Incomplete. She wanted to donate the items we had given her back to our organization so that another mom would have what she needs.

For us, the help we offer is relational, not transactional. The pandemic has given the entire world means to pause their lives, to think about what matters. Access to abortion isn’t a crisis, at least in the way that the abortion industry is trying to paint it as. The crisis is when women think there is no other option besides abortion. That’s the true crisis, that’s when we know that we have failed these women.

Pamela Whitehead is the executive director of ProLove Ministries.