Olivia Grady
|
Posted: Sep 12, 2019 12:01 AM
Share   Tweet
The opinions expressed by columnists are their own and do not necessarily represent the views of Townhall.com. 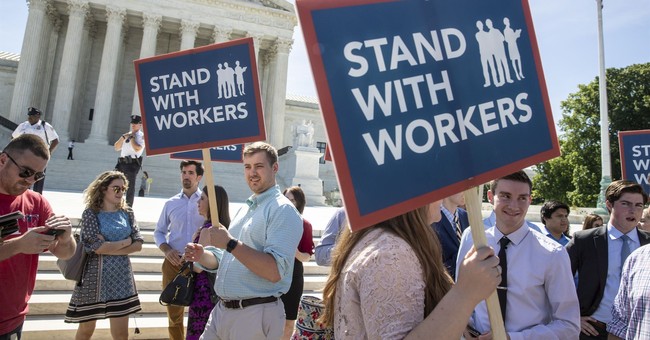 Critics of Alaska Governor Michael Dunleavy (R) are hoping to recall the governor for his budget proposal and other reforms. However, the governor is simply standing up for the constitutional rights of Alaskans, following federal and state laws, and ensuring that Alaska continues to prosper.

Dunleavy’s most recent action, for example, would restore the First Amendment rights of Alaska government employees.

On August 27, 2019, Alaska Attorney General Kevin Clarkson released a formal opinion at the request of Governor Michael Dunleavy. The opinion was related to the U.S. Supreme Court case,Janus v. AFSCME.

“Neither an agency fee nor any other payment to the union may be deducted from a nonmember’s wages, nor may any other attempt be made to collect such a payment, unless the employee affirmatively consents to pay. By agreeing to pay, nonmembers are waiving their First Amendment rights, and such a waiver cannot be presumed. Johnson v. Zerbst, 304 U. S. 458, 464 (1938); see also Knox, 567 U. S., at 312–313. Rather, to be effective, the waiver must be freely given and shown by “clear and compelling” evidence.”

In response to the Janus case, Alaska, under former Governor Bill Walker, correctly ended deducting agency fees from the paychecks of nonmembers.

However, the current Attorney General has found that this action is not enough to “protect the First Amendment rights of [Alaska state] employees.” Clarkson noted in his opinion that Alaska workers need to know that they have a choice. They can either pay union dues or not, and their choice will not affect their employment. In addition, they need to be aware that unions could use the dues to fund political speech that these employees disagree with. Finally, an employee’s waiver of his or her First Amendment rights must be contemporaneous.

With this in mind, Clarkson then reviewed Alaska’s current payroll deduction system and concluded that the current system does not meet the requirements of the Janus decision. The unions simply have too much power over payroll deduction authorizations for the state to ensure that the rights of Alaskans are not being violated. The unions, for example, design the form that the employees sign to authorize dues deduction, and they often require new employees to report to the union office where the form is distributed. Clarkson suggests that Alaska could maintain an online system with new written consent forms that employees can authorize dues deduction. Employees should also have the opportunity to opt-in and opt-out regularly and renew their opt-in every year.

In response to the legal opinion, Governor Dunleavy issued a statement, promising to “to ensure the State is in full compliance of the law and that Alaskans are informed of their rights.”

Another example of a positive reform is the Alaska state budget proposed by Governor Dunleavy.

Dunleavy correctly believes that Alaskans should receive a $3,000 Permanent Fund dividend based on state law. The Alaska Permanent Fund is supported by oil revenues and part of the fund is supposed to be distributed as an annual dividend to Alaskans based on a specific formula. However, after the Alaska Supreme Court ruled in 2017 that the dividend could be reduced, some Alaska politicians would prefer to spend the money instead of giving it to Alaskans. This is despite the fact that the Alaska legislature is already spending too much taxpayer money, and Alaska has a deficit of $1.6 billion dollars. However, Dunleavy has proposed a balanced budget that cuts the state’s deficit in half. Unfortunately, Dunleavy’s budget likely won’t pass the legislature, but he should be commended for his efforts to balance the state budget and reduce the deficit.

Because of these actions on behalf of Alaskans, Governor Michael Dunleavy should be a role model for other governors on how to protect the constitutional rights of their citizens and ensure the future of their states.

Olivia Grady is senior fellow of the Center for Worker Freedom, a project of Americans for Tax Reform.

Share this on Facebook
Tweet
Yet Another Afghan Refugee Has Been Charged with Rape
Rebecca Downs
Fox News' Chris Wallace: Jen Psaki is 'One of the Best Press Secretaries Ever'
Landon Mion
Twitter Censors Official Account of Rep. Jim Banks for Tweet About Rachel Levine
Rebecca Downs
Bill Maher Backs Dave Chappelle Amid Criticisms: 'Everyone Needs to Netflix and Chill the F--- Out'
Landon Mion
Putin Slams U.S. for Deleting Its History, Calls Transgenderism a 'Crime Against Humanity'
Landon Mion
Biden Has Largest Decline Than Any Other Post-WWII President, Yet Gallup's Headline Notes 'Steady' Approval
Rebecca Downs