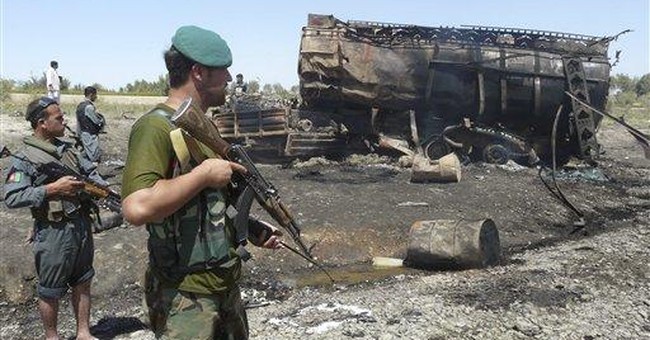 WASHINGTON -- In what has turned out to be the bloodiest month of the war in Afghanistan, there is a growing chorus of critics who claim that the fight is no longer worth the cost. Though most of those saying so aren't paying the price, the toll was evident at Dover Air Force Base early Thursday morning as 21 flag-draped gunmetal transfer cases were conveyed solemnly from the ramp of an Air Force C-17.

Ten of those aboard -- seven U.S. Army soldiers and three special agents of the Drug Enforcement Administration -- were killed the night of Monday, Oct. 26, when their helicopter crashed during an "extract" from a successful raid mission in northwestern Badghis province. For the first time since becoming commander in chief, Barack Obama was there to greet the grieving families. He was accompanied by Attorney General Eric Holder and DEA acting Administrator Michele Leonhart. It was the right thing to do.

Last month, our Fox News team was embedded with this same unit as they conducted similar operations. Special Agents Forrest Leamon, Chad Michael and Michael Weston were the first DEA personnel to be killed in Afghanistan since the war began. They and the U.S. military Special Operations Command unit with them were all part of a major effort to reduce funding available to the Taliban from illegal narcotics.

Ninety percent of the world's opium originates in Afghanistan. Heroin and morphine base are the country's major export commodities. Since being driven from power in Kabul in 2001, the Taliban have reaped hundreds of millions of dollars from the opium trade by taxing farmers, protecting laboratories and shipments, and delivering precursor chemicals for refining the raw product. The vast amount of money derived from opium production fuels not only the insurgency but also rampant corruption at every level of government in Afghanistan.

To break this nexus of drugs, violence and vice, the DEA's presence in Afghanistan has been increased more than fivefold in the past year. Today the DEA has more than 80 special agents and hundreds of intelligence specialists, translators, contract trainers and support personnel on the ground. Foreign-deployed advisory and support teams, or FAST -- supplemented by other in-country agents, U.S. Special Operations Command units and Afghan commandos -- carry out direct action strikes against known high-value targets dozens of times each month. Nearly all of these missions are carried out at night -- with all U.S. and allied personnel involved wearing night vision devices.

Monday night's raid, during which the three DEA agents and seven U.S. Army special operations soldiers perished, was just such an operation. Special Agents Leamon and Michael were FAST members, and Michael Weston, also a major in the Marine Corps Reserve, was from the DEA's Kabul Country Office. Accompanying the Americans was a platoon of Afghan commandos and police. Their mission: to destroy a major opium shipment at a transit point and capture or kill a high-value narco-Taliban target.

According to those who were there, MH-47 helicopters of the 160th Special Operations Aviation Regiment -- the legendary "Night Stalkers" -- lifted the raid force from the same base in western Afghanistan where we were just weeks ago, inserted them at the objective in Badghis province and departed. After what one participant described as a "brisk gunfight," the raid force moved to its extract landing zone. On takeoff, one of the MH-47s apparently struck an obstacle, and the large helicopter with 39 aboard crashed in the mountainous terrain, killing 10 and severely injuring nearly all who survived.

One of the raid participants gave me a matter-of-fact description of what happened next: "Within minutes of the bird going down, insurgents rushed to the site and engaged the survivors with small arms. For the next 40 minutes or so, we set up a perimeter, protected our dead and wounded, and fought back until we could be extracted."

That's it -- no bravado, just a straightforward recitation of what transpired. Those are the kind of people we have fighting this war -- as soldiers, sailors airmen, Marines and DEA agents. They meet the definition of hero: a person who puts himself at risk for the benefit of others.

Forrest Leamon, Chad Michael, Michael Weston and their families have made extraordinary sacrifices on our behalf. Those serving in Afghanistan today are in harm's way and have forfeited the comforts of home and the warmth and affection of family for the rest of us. It was good that Mr. Obama got to see them and their loved ones at Dover. Now he needs to do the right thing again and send Gen. Stanley McChrystal the troops and equipment he needs to win.