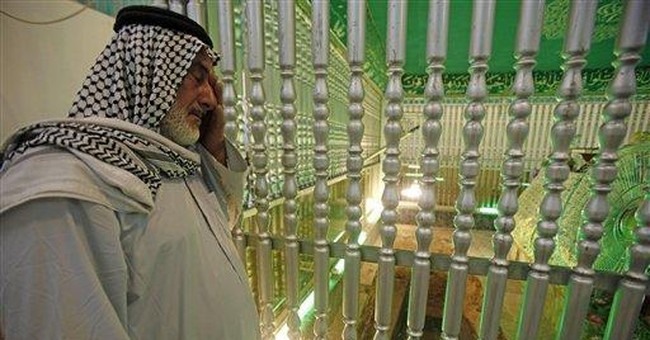 BAGRAM, Afghanistan -- It is amazing how a change of geography can alter perception. In the weeks leading up to this, my 16th Fox News deployment to cover the fight against radical Islamic terror, the news was full of attacks on civilian contractors. The target: those who have been providing support for U.S. military and intelligence operations since Sept. 11.

"Contractor" is the new "dirty word" in the so-called mainstream media -- and in Washington. On Capitol Hill, contractors are the Rodney Dangerfields of the war -- they just "get no respect." Here, where the war is being fought, contractors are regarded as essential to victory.

The attacks on civilian contractors didn't begin with this summer's hemorrhage of congressional leaks, sensational disclosures of classified information, threats of inquisitions and the appointment of a special prosecutor. Civilian contractors have been in the crosshairs of Congress since George Washington had to defend buying beans, bread, bandages and bullets from sutlers accompanying the Revolutionary Army.

All that is pale by comparison, however, to the venom now being aimed at civilian contractors supporting the campaigns in the land between the Tigris and Euphrates and in the shadow of the Hindu Kush. Though the mainstream media and congressional critics initially ignored the essential role played by civilian security and logistics contractors in the opening months of Operation Enduring Freedom, they went into high dudgeon when the Bush administration began preparations for liberating Iraq from Saddam Hussein. It has gone downhill since.

Critics on the left are quick to point to events like the 2007 incident in Baghdad that led to the prosecution of security contractors for using excessive force in carrying out protective duties. On Capitol Hill, members of Congress have threatened to cut the budgets of federal agencies that use security contractors instead of government employees to protect key personnel and sensitive installations.

At the Pentagon -- which uses more civilian contractors in the war effort than any other U.S. government entity -- the response to the criticism was capitulation.

In April, Defense Secretary Robert Gates announced plans to hire 30,000 additional DoD employees to cut the percentage of work being done by contractors. The fiscal year 2010 defense budget request replaces nearly 14,000 contractor personnel with government employees -- even though the "lifetime cost," counting government benefits and retirement, will more than double the expense to American taxpayers.

The numbers don't mesh, but when it comes to getting the press and politicians off the backs of Pentagon poo-bahs, cutting contractors loose is apparently a small price to pay.

Unfortunately, dollars may not be the only thing lost. Last week, in the midst of the firestorm over U.S. intelligence agencies using private contractors, Gen. Michael Hayden, CIA director from 2006 to 2009, asked a telling question: "Who is the best individual available for this task at this moment?" With more than 30 percent of his former agency's work being performed by contractors, the answer is obvious. He went on to note that the CIA uses contractors for their "very discreet skill sets" and "as an integral part of our workforce."

The CIA isn't alone. Here in Afghanistan, there are more than 74,000 military contractors -- and the number is increasing as more U.S. and NATO troops "surge" into the theater. Though it's unlikely to make the lead story in any of the mainstream media, contractors are performing tasks that U.S. government entities either cannot do or that cannot be done as economically. A few non-sensational, but essential, examples:

-- The Afghanistan Border Police (ABP) has the mission of securing the country's porous borders, an absolutely crucial task if the fight against the Taliban is to be won. The ABP is being recruited, screened, trained, equipped and advised by fewer than 140 private contractor personnel. To date, they have deployed more than 3,600 new ABP officers.

-- The Counter Narcotics Police and the Afghanistan Narcotics Interdiction Unit (NIU) are being mentored, trained and supported by fewer than 40 private contractors. These law-enforcement units are key components in denying the Taliban -- and al-Qaida -- revenue from opium production.

Like it or not, our modern, all-volunteer military cannot fight -- or even prepare to do so -- without civilian contractors. Propagandists for the left know it is no longer politically correct to attack young Americans in uniform, so they aim their venom at military, logistics, security and intelligence support contractors, instead. Disparaging and de-funding civilian contractors is just one more way of disarming America -- but at the end of the day, we won't win without them.