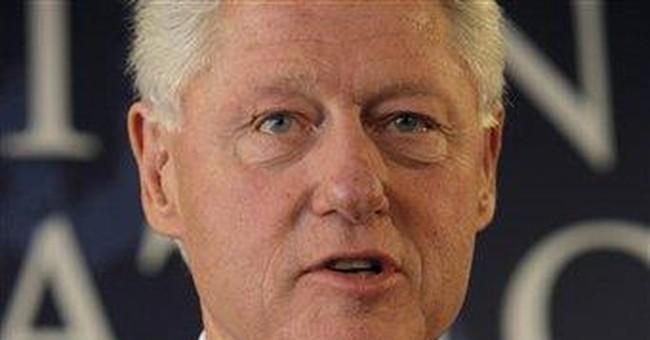 It is good that the women are reunited with their families and loved ones. Their release is being hailed by the White House as a "great gesture," and kudos is being showered on Mr. Clinton for his "initiative." The Obama administration maintains that North Korean press reports that Mr. Clinton conveyed a message from Mr. Obama "expressing apologies ... profound thanks ... and ways of improving the relations between the two countries" are untrue. Though the Clinton aircraft was refueled at U.S. Air Force bases in Alaska and Japan, the O-Team insists that the former president and party were on a strictly "private humanitarian mission" and that "there was no quid pro quo" for the release.

We all know better. The smile pasted on Kim Jong Il's face in the "official photographs" taken with Mr. Clinton tell the story. A price was paid. The North Koreans know what it is. The Obama administration knows what it is. But the American people don't -- and we won't unless transcripts of the Clinton-Kim Jong Il "conversations" are released. Don't count on that happening soon. The administration that promised to be "the most transparent in history" has made secrecy in foreign affairs a way of life.

In principle, there is nothing wrong with democratic governments engaging in secret diplomacy. Ben Franklin's covert negotiations with the government of Louis XVI resulted in the French monarchy's becoming our ally in the American Revolution. President Franklin D. Roosevelt made clandestine arrangements with London to aid the British against Nazi Germany before the United States entered World War II. In those -- and innumerable other cases -- the U.S. has engaged in secret diplomacy with allies to confound common adversaries, and the American people are not told about it until years -- sometimes decades -- later. But when our government conducts a covert contact with an opponent -- even for a humanitarian purpose, such as freeing hostages -- it nearly always blows up in our faces. I should know.

Here's why secret government negotiations with "bad guys" like the regime in Pyongyang so often go wrong:

First, those who hold the "prisoners" or "hostages" want something in return. When the captors get what they deem to be an acceptable offer, the captives are released. The very process of negotiating a "price," or ransom, for the life or freedom of an American citizen is a painful process. I know that, too.

In the 1980s, when the Iranians controlled the fate of Americans being bludgeoned and battered in Beirut dungeons, the price was 500 Israeli TOW missiles. In this week's case, the ransom may have been the Kim-Clinton photo op, the legitimacy bestowed on the aging dictator by the visit of a former U.S. president, a sub rosa "apology" and an implied commitment to open direct U.S.-North Korea "talks." It may not be as tangible as money, but it's still a ransom.

Second, in our government, nothing stays secret for long. The U.S. official "negotiator" and the captor initially may be the only ones who know what is being demanded and offered. But the U.S. government is ultimately vulnerable to the hostage holder's decision to make public anything it wants -- true or false -- about what the U.S. side was willing to give. Pyongyang already has disputed the O-Team's version of what Mr. Clinton said.

Finally, when a government pays ransom -- political or otherwise -- it establishes a precedent other adversaries will replicate. That's why most "hostage negotiations" -- such as those for crews held captive by Somali pirates -- are conducted by trusted private emissaries, not highly visible former heads of state. Plausible deniability really does matter.

Seeing as the O-Team apparently has decided to forgo all of these hard-learned lessons, perhaps it should try a similar gambit with Tehran. The Iranian regime currently holds three American hikers -- Joshua Fattal, Shane Bower and Sara Short -- for "illegally entering the Islamic republic." Sound familiar?

Bill Clinton, call home. Your wife wants to send you on another trip.