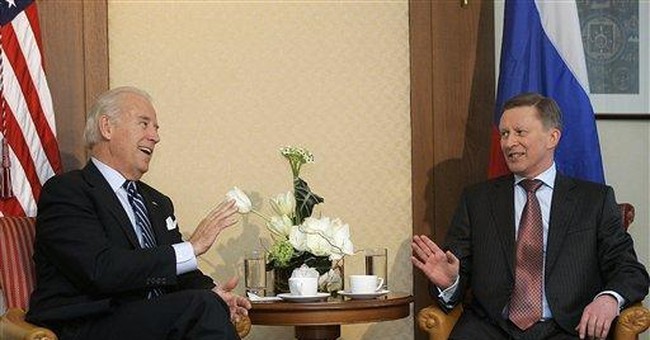 WASHINGTON -- From the day that Barack Obama wrested the presidential nomination from Hillary Rodham Clinton, his presidency became, according to those who were running his campaign, "inevitable." Even before winning the election, he began assembling a much-vaunted "team of rivals" to guide U.S. foreign and domestic policy. Though his running mate, then-Sen. Joe Biden, predicted, "It will not be six months before the world tests Barack Obama," and warned that it would be "an international crisis, a generated crisis, to test the mettle of this guy," we were assured that the Obama administration would be ready on "day one." Apparently, that's not the case.

In the days since the most expensive inaugural in history, the "rivals" have delivered a performance more akin to that of venal, self-serving, steroid-popping Major League Baseball players. Their promise to "focus like a laser" on the economy has produced "stimulus legislation" that even Sen. Charles Schumer describes as "porky." The "bank bailout" briefing proffered this week by tax-dodging Treasury Secretary Tim Geithner was so confusing and short on details that the stock market tanked -- again. That's only what the so-called mainstream media deemed worthy of coverage or comment.

Few of the potentates of the press have even bothered to report on the national security setbacks and missed opportunities that the "ready on day one" crowd has already delivered. Unfortunately for the new administration, few of these reversals can be blamed on their predecessors.

Since becoming president, Mr. Obama repeatedly has pledged a "new era of cooperation" with the rest of the world. Presumably, this means that the U.S. isn't going to play the part of "superpower" anymore. It now appears that there are those who aim to test his sincerity and to do so in ways that are not at all in our national interests.

Last week, Pakistan -- which Mr. Obama offered to bomb during his campaign -- responded to the new "kinder and gentler" overtures from Washington by releasing from detention the world's most notorious nuclear proliferator, Dr. A.Q. Khan. After masterminding Islamabad's nuclear weapons program, Khan used his "network" to help Libya, North Korea and Iran acquire nuclear weapons technology and components. He's been under "house arrest" since 2004, when Bush administration WMD sleuths and quiet diplomacy persuaded Moammar Gadhafi to reveal his supplier. That was then, and this is now. Just to make sure we and the U.N.'s toothless International Atomic Energy Agency got the message, the Pakistanis made it clear that Khan is now "free to travel" and resume his "research."

The "new approach" in Washington has produced similar results in other capitals. Less than a week after Vice President Biden told NATO and European Union diplomats in Munich that Mr. Obama wanted to "push the reset button" on U.S.-Russia diplomacy and reduce U.S. nuclear weapons "by 80 percent," Moscow responded with some "new initiatives" of its own.

Last Saturday, Russian President Dmitry Medvedev, widely viewed as a puppet of Prime Minister Vladimir Putin's, persuaded Kyrgyzstan's president, Kurmanbek Bakiyev, to reject American offers to renew a lucrative lease on the U.S.-built Manas Air Base, which is outside Kyrgyzstan's capital, Bishkek. Since 2001, the Manas "Airhead" had been crucial to U.S. and NATO operations in Afghanistan. It is even more so today because the Taliban interdicted the overland route from Pakistan to Kabul. The next day, Moscow agreed to allow U.S. shipments of nonlethal supplies through Russian territory into Afghanistan over a route that was closed after Russia invaded Georgia last summer.

Just to make sure that the "new team" in Washington is paying attention, on Monday, Putin met with Cuba's new dictator, Raul Castro. Despite Russia's ongoing currency crisis, the collapse of the Moscow Stock Exchange, and falling oil prices, Putin cobbled together a deal the Castro brothers are glad to get: a new financial aid package. According to news reports in Moscow and Havana, the Russians have promised $270 million in loans and $37 million in Russian commodities, such as grain and commercial aircraft. Unmentioned by either country is what the Russians expect in return.

A former U.S. intelligence official warns: "The Russians never give anything away for nothing. With them, everything is a quid pro quo. Keep an eye on Lourdes." The location referred to was a Soviet signals-intelligence site south of Havana, which was used for "listening" to U.S. defense and NASA communications. On Oct. 17, 2001, Putin, then the president of Russia, announced its closure.

None of this bodes well for the first few weeks of the new administration. Let's hope that none of the "over-promising" domestically or damaging diplomacy overseas is on an irreversible downward trajectory. In an increasingly unstable and dangerous world, the much-hyped "new way" of dealing with friends and adversaries has, thus far, failed to launch.