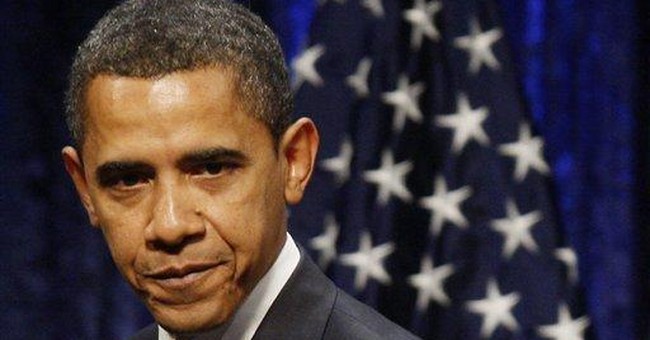 WASHINGTON -- During the course of the past two months, President-elect Barack Obama and the presidential transition team have replaced their campaign maxim, "Change We Can Believe In," with a new mantra: "We Only Have One President at a Time." It is a slogan that already is worn out.

PEBO and the PTT have used this phrase repeatedly in response to reporters' questions on the economy, federal bailouts, foreign policy, national security, the military campaigns in Iraq and Afghanistan, the future of "Gitmo," and the Russian decision to shut down the delivery of natural gas to Western Europe through Ukrainian pipelines.

During this week's Oval Office photo op with President George W. Bush and former Presidents Jimmy Carter, George H.W. Bush and William Jefferson Blythe Clinton, PEBO used the "one-president-at-a-time" dodge to avoid answering a reporter's hurled interrogatory about Israeli military operations in Gaza. The response from those in the lineup -- and apparently most in the mainstream media -- is to nod approvingly at PEBO's sagacity every time they hear him say it. The only trouble: It simply isn't true.

While the current, former and future commanders in chief went off to snack and chat, Sen. Joe Biden, the soon-to-be vice president of the United States, headed off to Andrews Air Force Base to commence a hastily convened weeklong "congressional fact-finding mission" to Iraq, Afghanistan and Pakistan. Absent from the secret itinerary divulged by Biden were other places with even more pressing problems. U.S. ally India, still recovering from the brutal Mumbai terror attack, is on the brink of attacking Pakistan. Ukraine, a NATO applicant, is threatened by interference from Moscow and this week's natural gas cutoff. And American ally Israel -- facing the threat of U.N. sanctions for acting in self-defense to protect its citizens from Iranian-supplied rockets and mortars being fired from Gaza by Hamas -- now faces attacks from Iranian-supported Hezbollah terror in Lebanon.

While the potentates of the press gush over the forthcoming "history-making inaugural," the Biden "CODEL" -- Washington-speak for "congressional delegation" -- to select trouble spots has made some little-noted history of its own. Unlike PEBO, Biden (the abbreviation VPEJB just doesn't roll off the lips) did not surrender his Senate seat. This week, when Congress reconvened, Biden insisted on being sworn in as Delaware's senior senator and on retaining his position as chairman of the Senate Foreign Relations Committee. Unlike Harry Truman, Richard Nixon, Lyndon Johnson, Dan Quayle and Al Gore -- who all ascended to the vice presidency from the Senate and did nothing to interfere in diplomatic issues between election and inauguration -- Biden is dabbling about in the affairs of state.

Biden defends his actions by pointing to the company he is keeping on this trip, fellow Sens. John Kerry, D-Mass.; Jack Reed, D-R.I.; Susan Collins, R-Maine; and Lindsey Graham, R-S.C. Earlier in the week, perhaps forgetting the post he will occupy Jan. 20, Biden said, "I'm still a Senate man." None of the media all-stars covering the PTT thought to ask PEBO what he thought of this response. Notably, Sen. Hillary Rodham Clinton, soon to become secretary of state, neither was included in the CODEL nor was available for comment about the propriety of such an unprecedented adventure.

None of this bodes well for the new administration -- or for America's interests in a very dangerous world. The situations in Iraq, Afghanistan and Pakistan are certainly important. But so, too, are outcomes in Gaza and Lebanon, our relationship with India, and the effects of an increasingly tense standoff between Russia and Ukraine. All of these places and problems matter to U.S. national security, and all are perhaps in more urgent need of attention.

PEBO can't have it both ways. He cannot claim that "we have only one president" and then dispatch his future vice president on a thinly disguised CODEL to diddle in diplomacy without having world leaders take note of what the incoming administration considers to be important. In permitting the Biden CODEL to go forward -- and approving the itinerary -- PEBO has sent a signal -- intentionally or not -- to allies and adversaries alike.

From Moscow to Tehran, Caracas to Beijing, London to New Delhi, in virtually every world capital, foreign leaders and their intelligence services are making judgments about the next leader of the Free World. They learned something about his wisdom, seriousness and maturity this week when he picked Leon Panetta, a man with intelligence-deficit disorder, to head the CIA. Perhaps they also had a little chuckle when he chose a TV celebrity doctor to become surgeon general to deal with bioterrorism and possible pandemics. Let's hope the Biden CODEL trip to southwest Asia did not lead them to conclude that PEBO is not a man of his word.