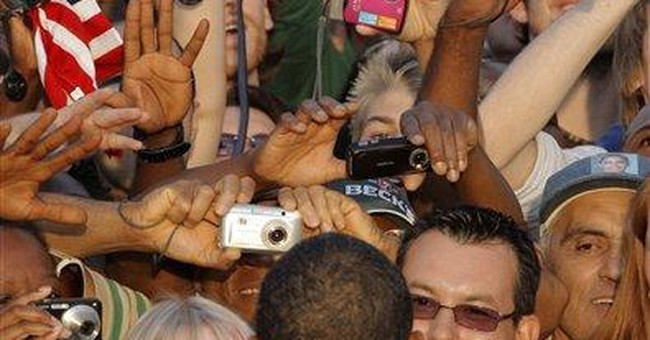 GEORGETOWN, S.C. -- "What's this guy running for, emperor of the world?" asked the sunburned fellow at the next table where we stopped for lunch. Mr. Sunburn was holding a copy of the local newspaper and pointing to a headline, "Obama pledges to work for peace." The inquiry, addressed to those sitting beside him, elicited only shrugs, so he answered his own question: "Just doesn't make any sense to me."

The Obama Machine's "Hope and Change" world tour has left more than a few people perplexed. Some -- such as the gentleman beside us at the restaurant -- are American voters who wonder why the presumptive Democratic nominee is campaigning in foreign countries for president of the U.S. Others. These voters seem baffled by the places and people chosen for meetings and photo ops with the candidate. Apparently, among the mystified are members of the media, who should have been asking tough questions. A brief look at what actually took place during this 10-day soiree only adds to the confusion.

The first five legs of the Obama overseas campaign swing were paid for by the U.S. taxpayers. Billed as a "congressional fact-finding trip," it included Sen. Jack Reed, D-R.I., and GOP dissident Sen. Chuck Hagel of Nebraska.

The first stop after departing the U.S. July 17 was Camp Arifjan in Kuwait. There Sen. Obama preened for the cameras with U.S. troops playing basketball -- a stunt unlikely to be replicated by Sen. John McCain, whose war wounds keep him from raising his arms over his shoulders and doing a decent layup.

Shortly thereafter, I got my first inquiry from a colleague, who asked, "Why do all the images taken by the U.S. military and released to the public show Obama in such a positive way?"

The answer, of course, is simple: No one in our armed forces today knows who the commander in chief is going to be in January, and no one in uniform is going to send out images of the man who could turn out to be their boss showing him picking his nose or committing a foul under the backboard.

Then it was on to Afghanistan for a surreal meeting in Jalalabad with Gul Agha Sherzai, the governor of Nangarhar province. Though the governor is suspected of being involved in the Afghan opium trade, no one in the mainstream media questioned the propriety of such a confab. Later on Saturday, the "CODEL" -- militaryspeak for "congressional delegation" -- received a briefing at Bagram Air Base from Maj. Gen. Jeffrey J. Schloesser, commanding general of the NATO Regional Command East. Again, the photos and videotape were spectacular.

On Sunday, after more photo ops with U.S. troops at Camp Eggers, the presumptive Democratic nominee met with President Hamid Karzai at the Presidential Palace in Kabul. Pictures of the meeting show the two men seated and chatting by a fireplace.

In Iraq Monday, Sen. Obama's first stop was at the Basra International Airport for photos and briefings from British, Iraqi and U.S. military commanders -- and then on to Baghdad for a red-carpet rollout at the residence of Iraqi Prime Minister Nouri al-Maliki. After the hourlong meet and greet, separate Kodak moments were held with Iraq's Kurdish President Jalal Talabani, Sunni Vice President Tariq al-Hashimi and Shiite Vice President Adel Abdul-Mahdi.

After a well-photographed tour of the 86th Combat Support Hospital inside the Green Zone, Sen. Obama sat still for photos and a briefing by Gen. David Petraeus and Ambassador Ryan Crocker and then took a picture-perfect helicopter ride over Baghdad with Gen. Petraeus before dining -- and being videotaped -- with the CENTCOM commander.

On Tuesday, following a photo-breakfast with U.S. troops, the Obama entourage headed for Ramadi, the once-bloody capital of Anbar province. There he took photos with the provincial governor, Mamoun Sami Rashid al-Alawi; the provincial police chief, Tariq Yousef al-Asaal; and Ahmed Abu Risha and Ali Hatem Ali Suleiman of the "Sunni Awakening" movement. At day's end, it was pics in Amman with Jordanian King Abdullah II and a news conference, during which Sen. Obama summed up all he had learned: "My view, based on the advice of military experts, is that we can redeploy safely in 16 months so that our combat brigades are out of Iraq in 2010."

On Wednesday, taxpayers got a break, as the Obama campaign started covering costs for the global "Hope and Change" tour. Photos were taken with Israeli and Palestinian leaders, and promises were made to "work for peace."

By Thursday, it was photos with German Chancellor Angela Merkel in Berlin. Frantic Friday was a whirlwind of photos and "press avails" in Paris, with French President Nicolas Sarkozy, and in London, with U.K. Prime Minister Gordon Brown, Tony Blair and the Conservative Party's leader, David Cameron. Space surely will be saved in the campaign scrapbook for a frenzied welcome-home party in Chicago Saturday night.

Bottom line: Image is everything. Lots of great pics, which we're sure to see again. Nothing changed on issues that matter -- but a big bill for beleaguered U.S. taxpayers to cover the costs of Sen. Obama's excellent adventure.