Dating The Donald . . . the Odyssey Continues

Nina May
|
Posted: Mar 13, 2016 12:01 AM
Share   Tweet
The opinions expressed by columnists are their own and do not necessarily represent the views of Townhall.com. 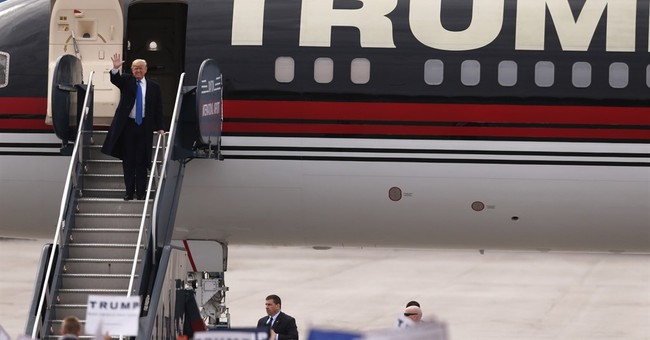 I can’t describe the national love-hate relationship with Donald Trump, in any other way than it reminds me of the emotional rollercoaster that a teenage girl is on during her first serious crush or romance.

So, work we me and channel your teenage girl as we analyze the Trump phenomenon as it relates to the average voter, and how it so parallels the dating experience.

So, the country is sitting in the stands of the political campaign and a group of young girls sees a new guy come in the gym and he is heading their way. They are giddy with excitement and wonder who he is, where he came from, does he go to their school now, or is he just visiting?

They watch as the 16 man team of their peers also size him up and immediately dismiss him as what . . . a dandy? An outsider? A flash in the pan who couldn’t possibly qualify to be on their team, or any other team for that matter? Yes, the guys dismiss him as irrelevant, a non player, not a factor in their goal to win that game they are about to play.

The girls on the other hand see potential. They smile sweetly as he glances up at them and, as if hit by lightening, a few get instant crushes. “Oh my gosh” . . . do the fluttery hands thing in front of the face . . . “he looked at me,” “He’s so cute, OMG, OMG, girl talk, girl talk, girl talk, yadda, yadda.”

All it took for the guys to be interested in this interloper was to see the mooney looks on the faces of their girls. “Wait, those are our girls.” Well, they didn’t mean in the existential way of domination or control, only that they have always been in the stands, cheering on the team that consisted of the same guys they have known all their lives. But still, they expect loyalty from their fans and these girls are their base after all.

But the new guy sees it differently as he flashes his dazzling smile and the girls swoon, practically falling out of the stands to meet him. And of course the new boy eats it up, loves the attention and even sees a couple of really cute ones he would like to date.

So, fast forward, he starts dating one of the popular girls who had always been the girlfriend of the BMOC, so, she was quite a catch for the new guy. The team members vicariously share the anger of the ditched BMOC and decide to jump him after class and beat him up.

But no one warned them that he was not only a street fighter but was a national champion in the Golden Gloves competition, had practiced mixed martial arts his whole life and ate guys like them for breakfast. So one by one, they would take a shot, and get smacked down by the pro of smack down. The field was dwindling as the onlookers marveled at the speed, the dexterity, and even the dirty underhanded tactics of this new boy. He was a street fighter after all. What did they expect . . . tiddlywinks?

How dare he call them names, point out their weaknesses and think that he could be on the same stage with them. Who did he think he was anyway? Well, the girls, and now the gathering crowd knew. He was a breath of fresh air from the status quo of doing what the team captains and players always said they should do. He was fearless in his attack of the establishment and brought in a new era of change to the stale air in the gym that was so desperately needed.

And, he gave the team and the school the hope they needed to see a victory over the competing schools for the National Championship.

But one of the girls who had the crush on him for his strength, and the fearless way he dealt with all the opposition, became very angry when he refused to face the tough questioning by a girl on one of the team panels. How could this be? How could their hero, who rode in on the white horse to save them all, now be caving in fear to a girl who might ask tough questions? It was especially shocking since all the other players were willing to subject themselves to her heartless, cruel, bare knuckled questioning.

So, the game against Iowa did not go well for the new kid. The team actually won without him playing in the field, and the girl with the crush, was crushed. Where was her champion? Her hero? To her, he looked like a spoiled brat who was used to getting his way. She lost respect for him and decided she was not going to date him any more, she was going back to the BMOC who was predictable, safe and would never rock her boat like this new guy did.

He gets angry and lashes out at the other team members who are left standing on the stage and an all out brawl occurs, further disgusting her with the team, the system, and the circumstances. She is heartbroken, her first crush has disappointed her and she doesn’t want to have anything to do with any of them, ever again. Period. End of story. But, she looks out the window and sees the killler team amassing win after win and realizes, they need to hang together or they will be destroyed in the national championship playoffs. They need to choose a team captain and all work together.

And just when she was ready to wash that man right out of her hair, her brother comes in, tells her what a great guy he is and that he is throwing his support behind this new guy. She is in shock. She feels betrayed on so many levels, but then realizes she loves her brother, she trusts him and maybe he is seeing something in the new guy she never saw before.

Then before long, in the next few months, she would come home and see her brother, the new guy, lots of the other team members sitting calmly in the living room watching some sport or another. She would walk through, marvel at the transformation, and think, “Hm, he is kind of cute.”

Wow, was that tedious. But it makes a point that the nation has been dating the new guy, Donald Trump, and experiencing all the teenage angsts that go with that adventure. There is the initial crush, the validation of said crush, the over extension of expectation, the reassessing of first and second impressions and then the settling of the dust.

With Ben Carson, throwing his support behind Trump, it is the same as the protective brother, the angry team member or BMOC changing his mind about the interloping new kid. This changes the dynamics of all the relationships and forces the girls, who had the crushes and lost them, to now see the new guy through new eyes.

Ben Carson’s support of Trump is a game changer if for no other reason, he was the one who stressed continually that he felt God had called him to run and was committed to hearing that still small voice. When I suggested a while back that they all get in a room, draw straws like the apostles in their replacement of Judas, there were no lights going on that gee, maybe we should see what God thinks since we all claim we love him and have a relationship with him through Jesus.

So, the most spiritual of the whole group, the one who never stopped saying he wanted God’s Will in the whole process, is the one who is backing the new kid, the bad boy, the street fighter, the heart breaker, the newly redeemed member of the team.

Now, we just have to watch for the rest of the story to see if he and his first crush get back together, giving him enough votes to win the general election (the National Championship) against the nasty girl from the other school. Stay tuned for another exciting adventure of . . . “America’s Love Affair with Donald Trump.”