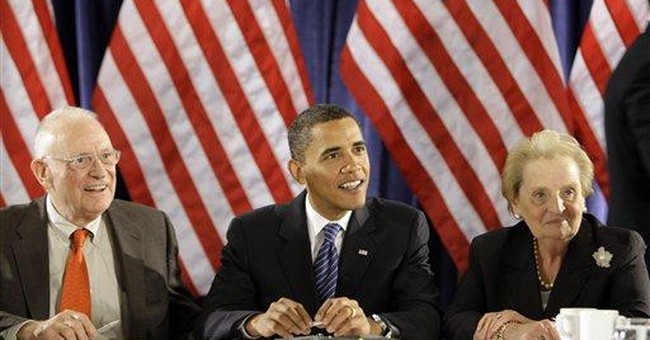 In the mid 1980’s I debated Gloria Steinhem on the Phil Donahue show, during the presidential campaign where Geraldine Ferraro was the first woman Vice Presidential candidate. The assumption by feminists, like Gloria, was that all women should vote for Geraldine because she was a woman. I asked her if she would be supporting Phyllis Schlafly if she were the candidate instead of Geraldine and if she would be offended if I made that same assumption.

When Allen Keyes was running for president, as probably one of the most brilliant candidates we have ever seen, he was ignored by the liberal media and the black community because, as a black Republican, he was deemed either irrelevant or out of touch. I often wondered if he had been the first black Democrat running for office if he would have been treated better, and then I had my answer in Barack Obama.

What is it about this man that has thoughtful, conservative blacks like Armstrong Williams and JC Watts saying they might vote for him? It can’t be his left of left politics that makes even Ted Kennedy look conservative. What thinking conservative could actually support a man who is going to raise taxes, increase the size of government, redistribute wealth, burden small businesses and the working class, and play nice with people who want to destroy us? It can’t just be about his skin color otherwise they would have been huge supporters of Allen Keyes when he ran for president, and as I recall, neither were.

Armstrong explains his position by saying, ''I don't necessarily like his [Barack’s] policies; I don't like much of what he advocates, but for the first time in my life, history thrusts me to really seriously think about it.'' JC Watts, former Republican congressman from Oklahoma, who is obviously more blinded by the light of Obama, says he expects Obama to take on issues such as poverty and urban policy, adding ''Republicans often seem indifferent to those things.''

No, JC, Republicans try and deal with these issues in a logical, private sector, community involvement way and they are shut down and called racists. Unless a huge tax bill is attached to every single social ill in this country, liberals think a solution is impossible. When Bush instituted faith based initiatives to allow the private sector religious and community groups to do what they do best, and partner with them instead of letting bloated bureaucracies handle personal and community problems, they are vilified for not sufficiently extricating church from state. When welfare reform bills were passed over the vehement objections of Democrats, and then actually worked, guess who stood up and took credit for them . . . Bill Clinton.

Of all the billions and billions of dollars through the years that have been thrown at poverty, each person living in poverty today would be a multi-millionaire if the money had just gone directly to them along with a financial advisor to help them keep it growing. But if the government had done that, there would be no need for the huge, bloated, out of control leviathan called “government” that is never sated. And that is the big distinction in this race; those who think higher taxes and bigger government are the answer, like Barack Obama, and those who want their liberties back. Unfortunately, the later group has no candidate this term. If they did, I am sure people like Armstrong Williams and JC Watts would not be doing the two-step with Barack because they would see a clear distinction in the candidates, beyond race, and vote accordingly.

This news should be a shot across the bow to the tone deaf McCain campaign that has adopted a fortress mentality while killing the peasants inside the walls. They still believe they can win without their base, and think their base is a handful of disgruntled Hillary voters and disillusioned moderates who are dissatisfied with the lack of leadership from both parties. Why would they vote for two candidates who represent exactly why they are disgruntled and dissatisfied with politics in general?

It is too bad that neither Armstrong nor JC saw our movie, “Emancipation Revelation Revolution”, even though Armstrong is actually in it. They would understand that this “historic” thing that they are expecting to happen was actually prevented from happening over 100 years ago by the very party that Barack so proudly hails from.

This is not a white vs. black issue that has its roots in slavery because there were too many white men and women who gave their lives trying to end the practice of slavery and Jim Crow. It is time to transcend past injustices, stop wearing counterfeit grievances on our sleeves, and work to fulfill the simplicity and sincerity of the American creed.

The battle to end slavery was fought by whites, against whites. It was not black vs. white. The battle to keep blacks from integrating fully into society, have a place at the economic and political tables were battles that pitted the racist white society against huge segments of the white population who supported equal rights, and many gave their lives in that battle. The Republican Party was actually founded by white abolitionists who were reviled and ridiculed, much like pro-life advocates are today. But thankfully they clung to their principles and ended slavery at great personal cost including for many, the loss of life.

Republicans today are clueless about their history, they don’t think it matters, or they have taken a permanent powder. Who are these people anyway? I used to think I knew. I switched parties years ago when I became ashamed to be a part of a political party that elected racist governors who would keep young black kids from attending white schools. I was ashamed of a party where all the Democrats were happy racists and to oppose them was dangerous.

I now find myself ashamed of the Republican Party for a myriad of reasons, but unlike 30 years ago, I have no party to turn to now. And neither do millions and millions of disgruntled, disenfranchised, marginalized conservatives who see two giant parties pressing in on them from both sides. The Republican Party today is “Democrat-lite,” and reminds you of the nerd in school who wants so desperately to be cool and does all the cool things that are so pitiful it actually pains you to see how ridiculous he looks. That is this party today. They want so much to be hip and cool, and with it, and tolerant and popular and generous with your money, and accommodating to every stupid, costly idea that comes down the pike. There is no leadership in the party and it is a very pale, faded image of a party that was formed to champion the cause of freedom and liberty for those enslaved.

That entire conflict and portion of our history is written in the blood of innocent victims, by the hand of a small group of power hungry people who are motivated by greed and control of others. They are the very same people who today, have elevated a man who talks in the grand sweeping phrases of third world dictators who rise out of the dust to throw pedals of empty platitudes at the feet of the adoring crowds. To see men of the stature of Armstrong Williams and JC Watts, fall for the con of a party using a divisive symbol to intimidate the country into following a path of virtual slavery to government is appalling and quite sad.

If more women in 1984 were as gullible and easily swayed as these two male leaders are, Geraldine Ferraro would have easily become the first woman vice president. But we resisted the temptation to indulge our fantasies of feigned oppression. She would have only been a symbolic success to those who agreed with her policies and would have been a dismal failure for everyone who opposed them. Would that have been a reflection on her ability to lead as a woman? No, no more than Margaret Thatcher was a raging success by those who approved of her every policy.

If Armstrong and JC want true leadership and pigment is that important, and like millions, are totally dissatisfied with the idea of a McCain presidency, then I challenge them to do something really courageous without selling their souls. They can write-in someone like Michael Steel as an alternative choice who, in my opinion is better than both the choices we have now. If color is what they want great . . . let’s do it. If conservative is what they claim they want, then, he’s the person for that too.

I challenge the country to stop whining and take control of this situation before it totally controls them and they wake up one day without choices. If you don’t like either candidate, settle on a write-in and just do it. That actually might be the only way to get McCain’s attention, and the only way to break this Obama spell off of people who usually have more sense than this.

Hey JC, Armstrong, and others who are being seduced by pigment; if young women, 20 years ago, could resist the feminist seduction of Gloria, Phil and Geraldine, then surely, you can resist the siren’s call to socialism.