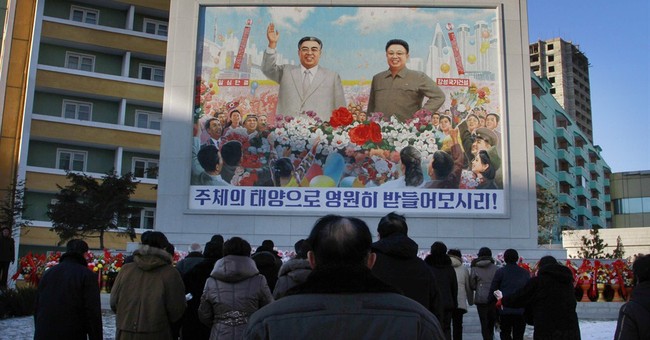 North Korea-US: The US Will Face the Democratic People's Republic of Korea's (DPRK) Toughest Counteraction. A statement by a spokesman for the DPRK Foreign Minister. Key excerpts follow.

"Now that the confrontation between the DPRK and the United States over human rights is high on the agenda, any dialogue on the nuclear issue is meaningless."

Comment: The North Korean leadership is manic about the UN's findings of longstanding, institutionalized and systemic human rights abuses in North Korea. For most of the world, that finding is not only overdue but unsurprising.

The North Korean leaders judge that it is a contrivance of the US and is aimed at overthrowing their system.

The significance of this statement is that the North Koreans have somehow linked human rights issues to the nuclear talks. That is a fairly small step once human rights concerns are equated with regime overthrow. Thus the North is once again exposing its deep seated belief that it is the perennial victim of plots by outsiders. Victimization is a standard fallback meme for preserving the North's sense of itself.

A second point is that the North's strategists appear to have re-interpreted the release of American detainees. The facts are that the North blundered in judging that the US would reciprocate what the North's leaders considered a good will gesture for starting talks.

Pakistan: Today, a team of seven or eight Pakistani Taliban killed more than 160 persons at an Army school in Peshawar in northwestern Pakistan. Officials said the dead included 132 children and nine teachers. All attackers were killed.

A spokesman for a faction of the Tehreek-e-Taliban Pakistan (TTP) claimed responsibility for the attack. He said the gunmen had been ordered to shoot older students but not children. Pakistani Taliban spokesman Mohammad Khurasani said the militants had been "forced" to launch the attack in response to army attacks.

"An attack took place on a school in Peshawar city of the Khyber Pakhtunkhwa Province of Pakistan at around 1000 [local time] this morning. According to the latest information, so far some 200 people have been killed or wounded in the incident. Most of the victims are said to be children."

"The Islamic Emirate of Afghanistan expresses its sorrow regarding the said incident and shares its condolences with the families of the children killed in the incident."

"The deliberate killing of innocent people, women and children is against Islamic principles, and this principle has to be considered by every Islamic party and government."

"The Islamic Emirate of Afghanistan has always condemned the killing of innocent people and children. Sometime ago it issued messages of condolences regarding explosions in a volleyball game in Yahyakhel District of Paktika Province and in a mosque in Nangarhar Province both in eastern Afghanistan and described the incidents as contrary to Islamic standards."

Comment: This is the deadliest attack ever conducted by the Pakistani Taliban. A point that has not received sufficient emphasis is that the school teaches the children of Pakistan Army personnel. It is army run and is located on an army base. That means that there was a serious lapse in security. Secondly, that implies the attackers had inside help.

The Afghan Taliban want to ensure that the inevitable retribution by the Pakistan Army stays inside Pakistan. The references to incidents in Paktika and Nangarhar Provinces are admissions that the Taliban leadership does not control all the anti-government groups. It suggests that the Peshawar attack might also have been the work of similarly misguided persons.

Iraq: On 16 December, the official website of Shiite Al-Sadr Trend leader Muqtada al-Sadr carried a statement in which Al-Sadr again rejected cooperation with the "occupation", but promised to cooperate with the Iraq army and police in defending the Shiites holy sites in southern Iraq.

He said that "since the occupation is currently present on the ground via its military advisers and its aircraft in the Iraqi airspace," we decided the following:

"First: We are more than ready to coordinate with the Iraqi Government so as to send members, who love Iraq and are willing to sacrifice themselves for its sake, to join the Iraqi Army for the sake of fighting in holy Samarra and deterring the danger threatening it.

Second: We announce our readiness to protect the areas in the southern governorates through joining the ranks of the army and the police so as to fill the vacuum which might be created if some military formations moved outside these governorates.

Third: Given the important role of intelligence, we would like to cooperate with the dignified government and its concerned agencies because military action alone is not enough to achieve victory over the enemy."

Al-Sadr pointed out that all this comes to defend the reputation of Iraq, religion, and the holy sites, asking his followers to wait until they receive his official orders after reaching an agreement with the Iraqi Government on all these points. Al-Sadr concluded his statement by advising the Iraqi Government to pay more attention to the fighters in the battlefields and to make sure that the Iraqi Army, rather than "factions or militias," is in control of the situation "to protect the dignity and reputation of the government."

Comment: The "occupation" refers to US and to Iranian military personnel. The Al-Sadr Trend has become increasingly concerned about the threat from the Islamic State of Iraq and the Levant to the Shiite holy sites, particularly Samarra. That concern apparently originates from within the Trend's own intelligence and helps explain the third proposal -- to share intelligence. News services during the past week have reported him as readying his militia fighters to meet the Sunni threat.

Today's statement goes farther in that he has offered that his fighters join the Iraqi Army for the purposes of defending Samarra. This is believed to be the first time he has made such a proposal and is an implied criticism of the program to form national guard units from Sunni Arab tribal militias. The Shiites viscerally oppose any program to organize and arm the Sunnis, especially as a separate force.

As for Shiite holy sites in southern Iraq, Sadr proposed a swap out. His fighters would join the Iraqi Army to enable the army to pull regular units off static guard duties for fighting ISIL without leaving a security vacuum. Sadr's instincts are accurate, or he is well advised, because his manpower represents a potential multiplier that might help break the stalemate in Iraq, depending on their capabilities.

Static battle lines imply a military equation. The addition of assets on the government side would break the equation in favor of government progress in rolling back ISIL. The best example of this process has been in Syria. The introduction of Hizballah fighters in support of the Syrian government forces saved the Ba'athist regime from falling to the opposition two years ago. On the other hand, the introduction of large numbers of foreign fighters has enabled ISIL to restore the military equation.

Comment: Pro-opposition sources claim that half of the 1,000 Syrian soldiers managed to reach the town of Hamah. One press source reported that the al Nusra Front exhausted its supply of US-made TOW anti-tank rockets in pursuing the government forces. That suggests al Nusra is overextended and vulnerable to a Syrian ground counter attack and to Syrian air attacks, which reportedly have increased.