The Slow Response to ISIS is Proving to be Deadly 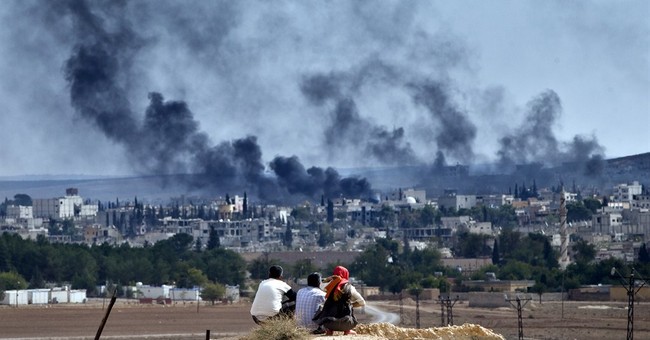 North Korea-South Korea: The Committee for the Peaceful Reunification of the Fatherland commented on the anti-North Korea leaflet balloon launch set for 27 October. "Relations between the North and South will face irreparable destruction. This situation will spark grave repercussions."

"Whether the South Korean authorities will tolerate the distribution of these leaflets or block it, improve or destroy relations between the North and South, is a touchstone of their position and attitude (sic). We are keeping a sharp eye on movements by South Korea.".

Meanwhile, near the Gimpo launch site, local South Korean residents scuffled with the activists who plan to make the launch on the 27th. The residents were upset because the activists were increasing the danger of North Korean retaliatory fire on them, after the activists departed. Some local residents tried to stop the activists, throwing eggs and yelling "don't put our lives in danger."

North Korea called the activists "human scum" and said the distribution of the leaflets could cause "all-out war".

Comment: All-out war is highly unlikely, but the North Koreans may be expected to try to shoot down any leaflet-carrying balloons that launch. The North's treatment of the balloon launches as a threat strongly suggests its leaders are looking for a justification for not holding the follow-up high-level talks that were announced at the finale of the Asian Games.

It is possible that local police will prevent balloons from launching.

Afghanistan: UK combat forces and US Marine Corps forces withdrew from two key bases in Helmand Province today. Neither announced the withdrawals and handovers of the bases to Afghan forces because of security concerns. The British withdrawal terminates the British combat mission in Afghanistan.

Comment: After 13 years of fighting, Helmand remains a Taliban stronghold. Western nations could not afford the cost of combat forces and the time required to pacify Helmand. As Taliban leader Mullah Omar planned in 2001 when he ran to Pakistan, the Taliban have outwaited the foreigners…again.

Iraq-Islamic State of Iraq and the Levant (ISIL): Kurdish Peshmerga forces said on Saturday they had recaptured several towns and villages held by ISIL in northern Iraq. In the south, Iraqi government forces claimed to have retaken the town of Jurf Sakhar, about 60km south of Baghdad.

In northern Iraq, northwest of Mosul, Kurdish forces, supported by US-led air forces on Friday and Saturday, managed to recapture the town of Zumar, which the Kurds lost to ISIL in August.

A Kurdish officer told the press that the Kurds began their advance on Zumar from five directions in the early morning after air strikes aganst ISIL positions. Iraqi state TV said at least 50 ISIL fighters were killed and 10 vehicles destroyed in the raids. The Peshmerga said they encountered fierce resistance. A car bomb killed seven of Kudish fighters.

South of Baghdad, meanwhile, Iraqi government forces claimed control of Jurf Sakhar in Babil Province, which is on the road from towns in western Iraq to the Shia shrine towns of Najaf and Karbala. In the latest fighting, government officials announced that 67 Iraqi security forces and Shia militiamen died, along with up to 300 ISIL fighters.

Comment: The pace of both Kurdish and government forces in launching counter-attacks is glacial. The extent of the ISIL threat from south of Baghdad has not been described in detail, but it seems less serious than the threat from ISIL forces west of Baghdad, who already are within artillery range of Baghdad's suburbs.

One Iraqi analyst said the purpose of the Jurf Sakhar operation was to improve security for pilgrims during the coming Shiite observances.

Erdogan told reporters that the Syrian Kurds "accepted 1,300 fighters from the Free Syrian Army (FSA) and they are holding talks to determine the transit route." He also said that the number of Iraqi Kurdish fighters enroute Kobani was reduced to 150. He approved 200.

Erdogan told the press, "As you know, in our talks with Obama we had agreed that the FSA could be the first choice (for deployment in Kobani) and the second choice could be Kurdish peshmergas."

Comment: Erdogan seems to have relented in his determination that the Syrian Kurds be eliminated as a threat. Instead he has been encouraged to adopt a strategy of undermining the Kurds with FSA fighters, whoever they are. It is possible that the Arabs in the FSA will end up fighting the Kurds in Kobani.

The Kurds said they were on the same side as the FSA and were glad for any help.

Comment: US air operations are critical to the defense of this link between Kobani and Kurdish supporters inside Turkey. If ISIL takes this border crossing, the reinforcements will have to fight their way into Syria from Turkey. No information suggests the Turkish government will permit that.

Lebanon: The Lebanese army deployed a few tanks and other armored vehicles and commando forces into Tripoli to stop the fighting between ISIL supporters and al-Qaida supporters.

The clashes broke out first on Friday night and killed 10 soldiers and two civilians. The numbers of Islamist fighters killed has not been reported.

Comment: This is spill-over fighting from the Syrian civil war. The reason for the clashes is not known, but a likely motive is control of arms smuggling from Tripoli to Syria.

Egypt: President al-Sisi said the country is facing a threat to its existence from jihadists after their deadly attack in Sinai last Friday. At least 31 soldiers were killed in two attacks. The deadliest was a bomb blast near the town of El Arish.

Following a meeting of the National Defense Council, President al-Sisi declared a three-month state of emergency in parts of northern Sinai. Egypt also closed the Rafah crossing into the Gaza Strip.

Comment: The significance of these attacks is that they were so successful, despite a continuing Egyptian Army offensive in Sinai to stop radical Islamist attacks.

Ukraine: Ukrainians voted in parliamentary elections on 26 October for the first time since the ouster of the Yanukovych government in Kyiv. Preliminary and unofficial information indicates that pro-West factions will lead the new parliament.

Comment: The BBC pointed out that 3 million eastern Ukrainians and 1.8 million Crimeans did not participate in the election. The two eastern regions will hold a separate election on 2 November.

Most analysts predicted the Islamist party, Ennahda, is likely to win. Ennahda's leaders pledged to form a national unity government even if they won an outright majority.

Comment: This is the first general election since the overthrow of Ben Ali in 2011. Thousands of candidates ran for 217 seats in parliament. No violence or serious disruptions to the voting were reported.

The next major event in the political normalization process will be the presidential election on 23 November.

Three years after Ben Ali's overthrow the country still suffers from chronic, high unemployment and othereconomic problems. Tunisia has had plenty of politics, just not enough bread or jobs. Those are the issues, not political reform, that sparked the so-called Arab Spring.