Terrorism is Un-Welcome in the New Libya? 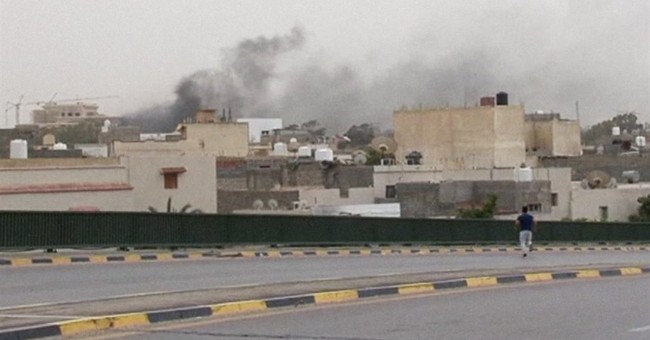 North Korea: On 18 May, the Minister of People's Security, General Choe Pu-il, accompanied by officials of the Pyongyang city government and Party organizations, apologized in public for the collapse of a 23-story apartment building under construction. North Korean media published images of the officials apologizing to the families of the victims at the site of the collapse. The North's media reported the collapse occurred on 13 May and the cleanup ended on the 17th.

The Korean Central News Agency (KCNA) reported that Choe Pu Il said the responsibility for the accident rests with him as he failed to uphold well the Workers' Party of Korea's policy of love for the people. He repented of himself, saying that he failed to find out factors that can put at risk the lives and properties of the people and to take thorough-going measures, thereby causing an unimaginable accident.

He made a firm pledge to make sure that the Ministry of People's Security becomes a genuine security organ which always protects the interests, lives and properties of the people, true to the party's noble intention of putting the popular masses above all.

A second General from the Ministry, who apologized, admitted that he was chiefly to blame because he was in charge of the construction.

Comment: North Korean media have not published the numbers of the dead and injured, but they must be significant to warrant a public apology. The only reason the North's leaders have ever apologized in public in this fashion - and they have on rare occasions - is to control damage so as to avert a worse crisis. Disgraced leaders apologize prior to punishment.

The event appears staged in that the family members stood at attention in their best attire. The so-called family members showed no signs of wailing, which would be normal even in North Korea.

Several points are noteworthy. The apologies of senior officials signify unusual public accountability. Some or all of them will be punished, possibly by execution.

Secondly, in North Korea, people's security includes safe construction and accident prevention. They are also the responsibility of the national police authority, which is the Ministry of People's Security.

Finally, the collapse is a huge embarrassment, which bodes ill for those responsible. North Korea only admits flaws in its system when it absolutely must, although construction methods are slipshod and standards are not enforced. This accident must have threatened riots in the capital.

Comment: The Congress sustained it worst electoral loss since independence.

Narendra Modi, the longtime Chief Minister of Gujarat State, will become the next prime minister. He campaigned on a platform of pro-business policies, of economic growth and prosperity, and in favor of globalization. Traditionally, the BJP has advanced Hindu interests at the expense of other religions and minorities. It is generally hostile to Muslims; prepared to destroy mosques that infringe on sacred Hindu land; and sometimes has incited violent attacks against minorities, especially Muslims.

His government will be tougher in handling Pakistan and China than the outgoing Congress government has been. That does not necessarily mean relations will be strained, but they will be more distant. However, a sensational terrorist attack traced to Pakistan, such as the Mumbai bombings in November 2008, would risk war, under a BJP government.

Ukraine: Security. The so-called command of the People's Army of Kramatorsk, in the Donetsk Oblast, said it beat back an attack by the Ukrainian National Guard.

"We have rebuffed the National Guard soldiers' attack. No information is available about our casualties yet," a spokesman for the Kramatorsk People's Army command said.

The Kyiv regime's Interior Ministry claimed the National Guard repelled a militia attack against a "base" near Slovyansk.

In Luhansk, separatists took control of the regional police headquarters through a negotiated surrender. This was the last administration building in Luhansk that remained under the control of Kyiv regime loyalists.

The leader said authorities in Kyiv are "deliberately staging an act of provocation" by trying to hold the Ukrainian presidential election in the east.

Round table talks. On Saturday the second session of the national unity round table talks convened in Kharkiv, instead of Donetsk, as agreed at the first session. In Kharkiv, Kyiv regime prime minister Yatsenyuk said the central government was willing to devolve power, give the Russian language special status and grant financial autonomy to the eastern regions. The eastern separatists were not invited.

On Sunday, a leader of the pro-Russia separatists in Kharkiv announced the Kharkiv region will hold a referendum on self-determination, like those in Luhansk and Donetsk, and will not participate in the 25 May presidential election.

Comment: The size of the pro-Russia movement in Kharkiv is not known.

Constitutional change,not secession. A Ukrainian oligarch who owns multiple interests, including steel mills that employ 250,000 workers, has intervened in Mariupol to restore order and to keep the city in a united Ukraine.

Billionaire Rinat Akhmetov's mining conglomerate, Metinvest, announced on 11 May that its workers would act as a volunteer militia to assist the police in Mariupol. On 15 and 16 May, hundreds of workers took to the streets to clear debris, dismantle barricades and check points and rout pro-Russia separatists from public buildings.

On 16 May, Akhmetov's financial management group announced it would not pay taxes to the "Donetsk People's Republic," as the separatists' demanded. It also refused to declare loyalty to the new republic.

Comment: Ukraine analysts reported that Akhmetov initially supported the pro-Russia movement. Just before the 12 May self-determination referenda in the east, he appears to have switched loyalties.

On multiple occasions since then, he has made public statements and interviews in which he said he opposes joining the Russian Federation. Instead, he claims he wants the central government to amend the constitution to decentralize political power and to recognize Russian as a second language. He does not support creation of a federal state.

On Friday, Akhmetov's minions appeared to be emerging as a third political force in favor of Ukrainian unity, backed by its large work force. By Sunday, the movement seemed confined to Mariupol, but it is not clear who is in control of the port city.

Libya: Forces loyal to a former Libyan general suspended the parliament in Tripoli and continued their offensive against Benghazi.

Paramilitary fighters under the command of retired General Khalifa Haftar fired on the parliament building, which they entered and where they detained at last 10 lawmakers. Two people were killed in the attack and 66 were injured, according to Libyan health officials.

One of Haftar's colonels, Mukhtar Farnana from Zintan, read the following proclamation on national TV. (NightWatch added the bold face and italics.)

"We announce to you, we - the sons of Libya to which we belong only and to no other, from the members of our army and its revolutionaries - the following:

-First, freezing the work of the General National Congress and stopping it from exercising any acts or behaviours connected with the sovereignty of the state, its legislations and its administrations;

-Second, entrusting the 60-man commission for the drafting of the constitution with carrying out the duties and legislative powers in the narrowest possible scope, as well as assuming the supervisory powers over the performance of the interim emergency government and overseeing, in conjunction with the higher elections commission, the execution of the parliamentary and presidential election commitments on their scheduled dates;

-Third, entrusting the Interim Government with continuing to perform the necessary duties for the general administration in its capacity as an emergency government; entrusting it with supervising the national army, the army and the security bodies and institutions and strike with an iron fist all the forces of extremism, terrorism and criminality; and guaranteeing stability without the slightest threat and without interference in the personal liberties, freedom of expression, the media, and networking activities. The international community understands and realizes the facts of the new situation in the state of Libya.

-Fourth, we announce to the world that the Libyan people will never accept their country becoming either a cradle or a host for terrorism, and that, having regained power from the hands which forfeited the trust, they will work so that Libya will, God willing, become a model for peace, stability and liberties…."

"In conclusion, we announce that the military action which took place today in Tripoli City was not aimed at staging a coup against the people's legitimacy, the holder of sovereignty and the source of legitimacy. It was not aimed at seizing power and excluding any political side peaceful towards the political process, but it is an absolute alignment with the people's choices and the requirements of democracy, freedom, and man's dignity."

The Libyan government called the action a "coup", but Haftar's spokesman denied it.

Algeria announced it has closed its border with Libya.

Comment: This overthrow appears to be the Libyan variation of Egyptian General al-Sisi's overthrow of the Muslim Brotherhood last July. Haftar's action will break the deadlock between Islamists and non-Islamists in the parliament.

Haftar is the former third ranking officer in the Libyan armed forces, who was in charge of the Libyan Army ground forces. He served under Qadhafi, but defected in the1980's He lived in the US for a time, but returned to Libya during the civil war in 2011.

The statement in bold italics indicates Haftar's purpose is specifically to prevent Libya from becoming a base for terrorism. His target is the parliament, which Haftar and his supporters charge with betraying Libya to Islamists, Islamic militants and jihadists.

General Haftar has been pushing to remove Islamists from the Libyan government since at least February when he declared parliament suspended and called for the creation of a caretaker government. He says parliament 's promotion of strict Islamic practices and observances is responsible for the violence and the breakdown of civil order.

The size of his "Libyan National Army" is not clear, but the paramilitary forces from Zintan, who were instrumental in overthrowing Qadhafi, appear to be part of it. They are hostile to the Islamists and are the largest and most powerful militias in Tripoli. Thus far, three Zintan "brigades" have been identified as part of the Libyan National Army. Zintan is in northwestern Libya, just southwest of Tripoli.

Benghazi. Haftar sent a contingent of his forces, supported by aircraft, to Benghazi on Friday to rid the city of Islamists. News services reported 70 killed in clashes between Haftar's militias and Ansar al Sharia, which was involved in the terrorist attack on the US Consulate in Benghazi.

It is too soon to judge whether Haftar's action will succeed. He appears to have control of at least one Libyan air force base and is using its aircraft in a joint campaign against Benghazi.

The rough similarity of Haftar's action with the Egyptian military's overthrow of the Mursi regime suggests a connection, at least in inspiration. The use of aircraft in a joint campaign suggests some form of Western support. If Haftar succeeds, he will roll back the so-called Arab Spring in Libya, just as al Sisi has done in Egypt.