Putin Takes Another Shot at Obama 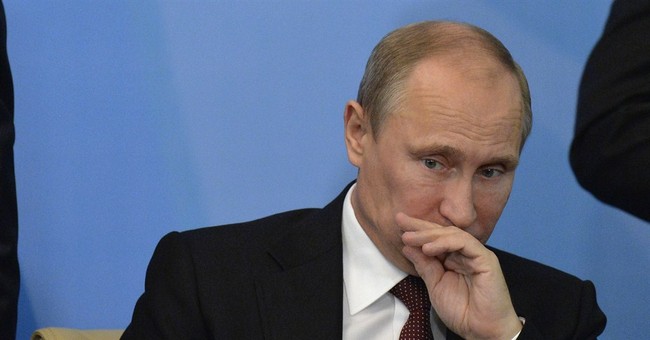 Russia:President Putin today accused the West of worsening the situation in Syria by "blowing up an internal conflict" there. His remarks were broadcast by state news television channel Rossiya 24.

At an international meeting Putin interrupted former French Prime Minister Francois Fillon who said mass murder in Syria must be stopped. "Of course, we cannot calmly watch mass murder," Putin said. "But let's be honest with each other: yes, there was an internal conflict in Syria, but it was immediately blown up from abroad, and weapons and rebels started coming into Syria."

He accused the West of supporting rebels in the Syrian conflict. "You are helping them to come to power. And what will you do next? Will you take a newspaper and push them away from power?" Putin asked.

According to Putin, the West has no answer to the question what will happen next in Syria. To the question "what will you do?", the West replies "we don't know", Putin said. "But if you don't know, what is the point of launching strikes that are to no avail and without knowing how they will end?" …

Later in the discussion, Putin said it was "premature" to ask him about what Russia would do in the event of Syria's failing to meet its obligations under the chemical weapons deal. "So far we have had no reasons to believe that the Syrians will not meet their obligations," he said.

Comment: Putin was in fine fettle and also criticized Western interventions in Iraq and Libya as failures for making changes without thinking through the consequences. His linkage of Iraq, Libya and Syria - all Soviet/Russian clients - suggests he perceives the West deliberately has acted to strip Russia of its clients. In this view, that matches a pattern similar to the eastern expansion of NATO that stripped Russia of its buffer states in eastern Europe and the Baltic.

In eastern Europe, Putin stopped NATO's expansion at the Ukraine and at Georgia and continues to harass the Baltic members of NATO. In the Middle East, his words and demeanor indicate Syria is where Putin is drawing hisline. Russia is stronger now than it was when NATO expanded eastward.

One of the many messages behind the message is payback.

Syria: Update on Feedback concerning M-14 rockets or knock-offs. After nearly a week of exchanges with genuinely brilliant and well-informed Readers, there is no reasonable doubt that the rocket body examined at Ghouta was not fired by a regular Syrian army rocket unit because the Syrian army has not fielded the weapon system that fires that rocket for nearly 30 years. The army had them, as did most Soviet-supplied armed forces, but replaced them in the 1980s with the BM-21 122-mm 40-tube, truck-mounted multiple rocket launcher … as did most Soviet-supplied armed forces.

As for the 330-mm diameter rocket, no information has been received on that.

What the evidence and our judgment signify is that the pool of plausible users of that rocket is larger than discussed in international media. There are multiple plausible users

Rebel groups sometimes may be distinguished by their weapons. Not all have rocket weapons, but, as reported in the Al Jazirah video mentioned yesterday, some do. The Free Syrian Army should be able to provide insight on who fires M-14s.

Little information is available on the weapons used by pro-government militias in Syria. Syrian special forces could use a variety of old and new equipment, but there is no information about their practices. Syrian army defectors should know answers to these knowledge gaps.

No open sources report on weapons used by Hizballah fighters in Syria. Hizballah has fired BM-14s from southern Lebanon into northern Israel in the past, along with Fajr 5 333-mm rockets.

In the Feedback exchanges, it is also beyond doubt that BM-14 tubes and M-14 rockets have been used in every past conflict in which the Soviets have supplied weapons to a state or a non-state actor. They include Yemeni rebels, Hizballah in Lebanon, Palestinian groups and an assortment of Islamist militant and terror groups. There also is a Chinese knock-off of the Soviet system that was sold to clients. That means the system or its dismantled components are still available.

Equipment discarded, abandoned or junked by modernizing armies always and everywhere gets recycled and repurposed.

NightWatch remains open to evidence that would alter or negate these judgments.

Egypt: Supporters of Mohamed Mursi have called for demonstrations on Friday, 20 September, following a security forces raid on a pro-Mursi neighborhood on the outskirts of Cairo. The National Alliance to Support Legitimacy, an Islamist group led by the Muslim Brotherhood, said the protests would continue for a week under the slogan "Youth are pillar of the revolution" to mark the start of the new academic year.

The security raid occurred in a strongly Islamist area west of Cairo, known as Kerdasa. Its purpose was to round up suspects accused of killing 11 policemen last month. They arrested 51 people and were searching for another 100. Three of those arrested allegedly played a prominent role in the assault on Kerdasa police station which the 11 officers died

Comment: Today's raid was the second this week against remaining centers of support for Mursi. The army is leading similar operations in North Sinai, along the road to the Gaza Strip. The government is taking a methodical approach to reducing the holdouts. The two operations thus far appear to have been well planned and executed.