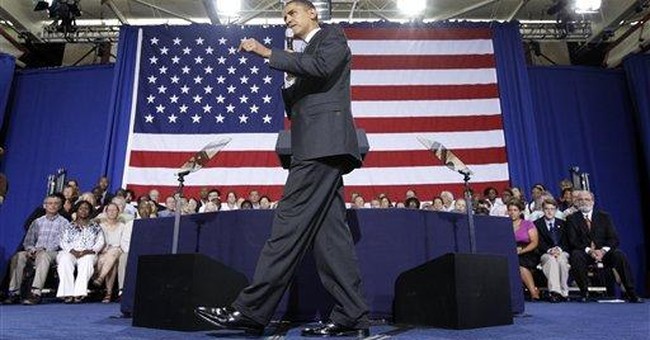 I was born and raised in Wisconsin, so when a politician calls other Americans “un-American,” it conjures up the bad old days of Joe McCarthy—that cold war demagogue sent to the U.S. Senate by Dairy State voters. Not Wisconsin’s finest hour!

Over the past few weeks, citizens who exercised their First Amendment rights protesting the Democrats’ politically motivated race toward socialized medicine have become the target of all sorts of vitriol from Democrat congressional leaders. These modern-day Capitol Hill McCarthyites have yelped that the citizen-protesters showing up at town-hall meetings to say “no” to ObamaCare are akin to political terrorists, Nazis, Ku Klux Klan racists (according to Rep. John Dingell) and “evil-mongers” according to Senate Majority Leader Harry Reid.

Topping off these smear-by-analogy attacks, Speaker of the House Nancy Pelosi, and her sidekick Rep. Steny Hoyer, wrote a column in USA Today charging that the behavior of the protesters is “simply un-American.” I have news for these thin-skinned solons, what’s happening at your home district town-hall meetings is about as un-American as the Boston Tea Party or those mass demonstrations against the Vietnam War, or those Obama for President campaign rallies that most of you participated in.

Voting for a massive healthcare bill without even reading it is un-American. Expecting your constituents to roll over and bark at the moon every time you give the command is un-American. Attempting to use taxpayer cash during a recession to buy new, luxury jets for the congressional air force (ConAir) not only gives new meaning to the term “cash-for-clunkers,” but it is also, I would argue, un-American! No wonder millions of constituents are trying to make Democrats feel like prairie dogs at a rattlesnake convention.

Regrettably, there are some private sector groups that also deserve to be severely rattled for their actions during the healthcare debate. PhRMA, the lobbying arm of the pharmaceutical industry, pledged $80 billion over the next decade to support the Administration’s version of healthcare reform. Not to be outdone, the American Hospital Association, Federation of American Hospitals and the Catholic Health Association of the U.S., pledged $155 billion in spending reductions. I hope the public and rational lawmakers will remember those numbers after the dust settles on the question of socialized medicine.

These groups apparently decided that it is their members’ “corporate social responsibility” to pledge their support and cash to help underwrite ObamaCare. This is truly appeasement at its worse. This cabal of inside-the-beltway numskulls obviously believes that if they embrace the “Chicago Way” and pay early and pay often, maybe the Obamanistas will leave them alone when the real cost of ObamaCare starts to mount up. Billy Tauzin, the head of PhRMA, admitted as much when he told the Cato Institute’s Michael Cannon that this deal prevents a much worse deal.

These organizations are now being joined by the American Medical Association (AMA) and the Service Employees International Union (SEIU) in launching a multi-million dollar propaganda campaign to pressure conservative Democrats and others in Congress to support what amounts to a government takeover of our healthcare system.

I can understand why the SEIU would be involved. They never met a government handout they didn’t like. But what about the docs? Have the socialists taken over the AMA? No wonder a recent online poll of 4,156 physicians found that 75% of those surveyed are not AMA members; 89% claim “The AMA does not speak for me;” and 91% do not believe that the AMA accurately reflects their opinions as physicians. Maybe it’s time for a name change. Maybe the American Socialized Medicine Association or the Medical Rationing Association would be fitting. Or, how about renaming the AMA the Pull the Plug on Grandma Society?

The one thing that the neo-McCarthyites and I agree on is that analogies can be quite effective and, sometimes, even informative. I would urge anyone reading this column or watching ObamaCare propaganda paid for by the appeasement crowd in Washington, D.C. to consider this:

Legend has it that back in 1999, the federal government took over the Mustang Ranch brothel in Nevada after the brothel’s manager lost a federal fraud, racketeering and conspiracy case. I am told by sources on Capitol Hill that, as required by law, the government tried to run the operation. It failed and the Mustang Ranch closed. Now we are being asked by the Democrats to trust the economy of our country, our banking system, our auto industry and quite possibly the health of our loved ones to the same nit-wits who couldn't make money running a brothel and selling whiskey.