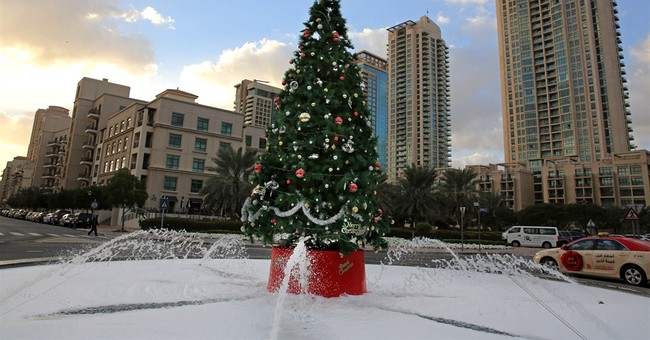 The Left are inventive, and their culture war is unending.

For most of the last decade, they have continued their assault on Christmas. They maintain the use of the word is offensive to non-Christians, and therefore politically incorrect. What a joke.

The Christmas tree is the “Holiday Tree” and “Season’s Greetings” or “Happy Holidays” replace “Merry Christmas”. Christmas decorations in shops and display windows of stores are frowned upon. Funny looks are received from those walking their manicured, prize-winning poodles past your house when they notice your Christmas lights.

Those behind the war on Christmas are urban dwellers who consider themselves the sophisticated gatekeepers of the common good. Awful people without even a trace of the spirit of the season.

Again, rather than leaving a nation whose traditions so clearly irritate them and perhaps moving to another that does not celebrate Christmas, say Iran, perhaps (where their views on feminism, gays and drugs would be most welcome), they remain and have the audacity to try and change their country.

What exactly does “Happy Holidays” mean? What on earth is a “Holiday Tree”? What exactly are the season’s greetings? As they say in Texas: “Some people just need to be shot”. And before the PC brigade jump on me for incitement of violence: I don’t mean it literally. You know exactly what I meant.

Political correctness is a vacuous ideology that everyone should refuse to subscribe to. It seeks to emasculate, conform and limit freedom. Those that use it as their weapon seek to fundamentally transform the culture, behavior and actions of a nation.

I am a traditionalist, a Christian and a patriot, and I abhor relativism. Oh, and I love Christmas.

I will always wish someone a “Merry Christmas”. If they don’t like it, they can either live with it, or go.

To my readers, and their families: I wish you a merry, merry Christmas, and a very Happy New Year! I ask that God bless you with all the health and prosperity you need in 2013.

I will be back next year, fighting the good fight.

Hang tough, stand tall, stay strong and be proud: we are in the right.

Nick Adams is an Australian best-selling author, speaker and political commentator. He is best known for his work in the field of American exceptionalism, and is credited with a resurgence in the idea worldwide. A regular on Fox News Channel, Fox Business Network, C-SPAN and nationally-syndicated radio, Adams has received several state awards, being appointed an Honorary Texan by Governor Rick Perry in 2013. He is a Centennial Institute Fellow at Colorado Christian University. He is the author of the book: The American Boomerang (2014). He can be reached on Twitter @NickAdamsinUSA. His website is www.nickadamsinamerica.com.