The Flag of Massachusetts is ‘Racist’— Who Knew?

Nicholas Waddy
|
Posted: May 25, 2019 12:01 AM
Share   Tweet
The opinions expressed by columnists are their own and do not necessarily represent the views of Townhall.com. 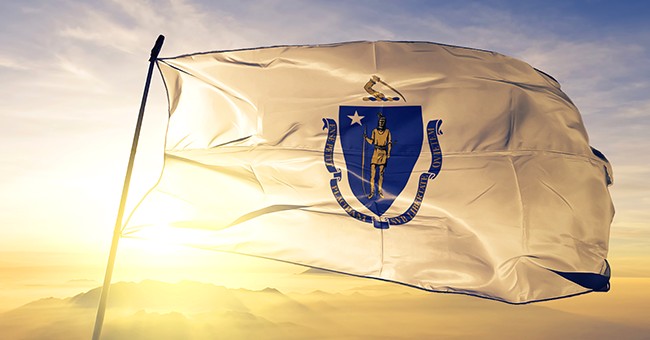 A new front has opened up in America's culture wars, and specifically in the Left's ongoing effort to stigmatize even the most innocuous elements of our country's heritage. Their latest bugaboo is the official flag of the Commonwealth of Massachusetts.

The Massachusetts flag, as well as the state seal, feature an image of a Native American warrior with a bow and arrow. The Indian is by no means depicted in an unflattering light. His arrow is pointed downward, an allusion to the peace achieved between Pilgrims and Indians at the first Thanksgiving.

In addition, the flag and seal feature a common heraldic device: a muscular arm wielding a sword. Given the state motto, “By the Sword We Seek Peace, But Peace Only Under Liberty,” the arm and sword are clearly symbolic of Massachusetts' role in the American Revolution. The sword is said to be based on one owned by Myles Standish, a complex figure from Massachusetts' Pilgrim days who did indeed make war against some Indians — but who also befriended and fought alongside others.

It is evident that the designers of the state flag and seal did not by any stretch of the imagination intend to celebrate the oppression of Native Americans, but that is how the snowflakes on the Left are choosing to take it today. Thirty communities in the Bay State, including Cambridge, the home of ultra-liberal Harvard University, have voiced their support for a bill that would terminate the use of the present flag and state seal in favor of entirely new designs.

One can easily imagine the team of politically correct all-stars who these liberals would assemble to create a new flag for Taxachusetts, and the sort of monstrosity this left-wing brain trust would produce.

A nod to all the Left's favored groups, defined by their race, ethnicity, religion, gender (not to be confused with biological sex), sexual orientation, disability, etc., would be obligatory. Indeed, it is inconceivable that a single group would be left out.

The class struggle, so beloved of Massachusetts luminaries like Elizabeth Warren, would have to be featured prominently in the new flag. Perhaps a hammer and sickle, or a heroic profile of Lenin?

The present flag's white field — evocative surely of white supremacy — would have to be supplanted by a new rainbow color scheme. Meanwhile, the old motto, “By the Sword We Seek Peace, But Peace Only Under Liberty,” is obviously passé. Something more “progressive” would be better: “In Political Correctness We Trust,” or “Massachusetts: The Wokest State in the Union.”

The sheer silliness of this effort to sanitize the history and heritage of Massachusetts, and to cleanse the flag and seal of any symbolism that makes liberals uneasy, should not obscure the high stakes involved. Whereas the Left may begin by chipping away at the commemoration of marginal historical figures, and by obliterating seemingly insignificant cultural symbols, its long-range agenda is far more ambitious.

The banning of Robert E. Lee has led, in short order, to the disparagement of Founding Fathers like Washington and Jefferson. Likewise, the proposed permanent furling of the flag of Massachusetts is small potatoes to most liberals, while the denigration of the Stars and Stripes itself — the most powerful symbol of America — is their ultimate symbolic goal.

Make no mistake: many leftists equate America's flag with America's sins, including racism, sexism, and homophobia, which they believe define us as a nation and as a people. Certainly they view our national history as more shameful than glorious. New York Governor Andrew Cuomo spoke for many of his fellow liberals when he insolently declared that America “was never that great.” One can easily imagine how people who think like this could dismiss patriotism and flag-waving as fascistic indulgences, and the American flag itself as tainted.

The good people of Massachusetts, therefore, would be wise to frisk aside this latest assault on their heritage with contempt. They should realize that their flag is not, in fact, a threat or an affront to anyone.

To give in to the politically correct mob that seeks to eradicate the Massachusetts flag would thus be a grave error. It would only embolden the PC crowd to even greater flights of fancy, and even bolder outrages against our culture and our values.