Chalkboard Rebellion in the Golden State 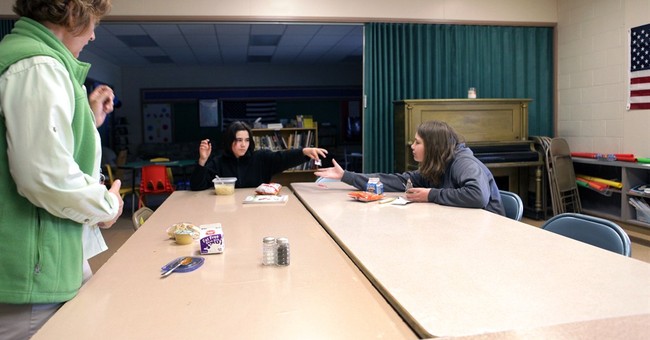 Ten California teachers are suing to break one of the strongest iron triangles in American politics, where the taxpayers pay the teachers; the teachers’ union supports candidates and referenda, and that leads eventually to the teachers getting better pay, benefits and working conditions.

A civil rights law firm filed a federal law suit April 30 on behalf of 10 California teachers and the Christian Educators Association International challenging the state’s closed shop law that has them contributing to support political activity they opposed.

"Individual teachers have a constitutional right to decide for themselves whether to join a union and financially support its efforts," said Terry Pell, president of the Center for Individual Rights, the Washington-based non-profit law firm taking on the case.

"The government may not compel teachers to provide financial support to policies with which they fundamentally disagree,” he said.

Rebecca Friedrichs, one of the teacher plaintiffs, said, “The union spends millions of teachers' hard earned monies supporting causes and candidates that many of us oppose.”

Friedrichs said she does not want to control or stop the union from its activities. “The union is free to press its agenda, but individual teachers should not be forced to pay for it.”

It comes down to fairness, she said. “It is shocking to me and many other teachers that union officials have the power by law to spend our wages to press for causes that many of us oppose on moral, fiscal, or philosophical grounds."

By going after the California Teachers Association, these teachers are going after the biggest fish in the 50-state pond. In the Golden State, the CTA donated more than $150 million in political donations between 2003 and 2012, according to the website followthemoney.org. The other defendants are the National Education Association as well as 10 affiliated local teachers’ unions and local school officials.

In the last decade, the CTA gave 89 percent of its contributions to ballot initiatives, 10 percent to Democrats and less than 1 percent to Republicans, according to the site. The union backed 299 winners, 77 losers and a total of 625 incumbents.

California is a state with a huge political tradition of getting things done by ballot referendum, and the union was deeply involved in left-wing causes. In 2003, the union gave $250,000 to a fund called: Californians Against the Costly Recall of the Governor, during the recall election of Democrat J. Graham “Gray” Davis Jr., and 2008 the union donated $1.3 million to defeat Proposition 8, a referendum that amended the state constitution to outlaw same-sex marriage.

In 2012, the CTA spent $21 million to successfully defeat Proposition 32, which would have prohibited paycheck-deductions to unions to support political causes. If that seems like a lot of money, consider the teachers union was only in for a third of the $65 million raised from dozens of other unions in the state.

With the defeat at the polls, California opponents to compulsory support of union political activities need are turning to the courts.

“Forcing educators to financially support causes that run contrary to their political and policy beliefs violates their First Amendment rights to free expression and association and cannot withstand First Amendment scrutiny,” said Michael A. Carvin, partner with Jones Day and lead counsel for the plaintiffs.

“The Supreme Court questioned the continued constitutionality of ‘agency shop’ laws last year in the Knox decision,” he said.

The Supreme Court ruled in the 2012 Knox v. Employees Intl. Union that the Service Employees International Union in California violated the First Amendment rights of its non-union members by forcing them to pay a 25 percent increase in union dues without their consent to help fight ballot initiatives in the state, he said.

In his majority opinion, Justice Samuel A. Alito Jr., wrote: “Because a public-sector union takes many positions during collective bargaining that have powerful political and civic consequences, the compulsory fees constitute a form of compelled speech and association that imposes a significant impingement on First Amendment rights.”

Dues and agency fees yield the CTA 2011 revenue of more than $191 million. The revenues came not only from member dues. The “agency shop” law means to compensate unions for their work “collective bargaining” on behalf of all workers, members and non-members, so non-union teachers are obligated to pay dues to a union they do not belong.

Depending on the local union, non-union member teachers in California can pay more than $1,000 a year to cover their share of collective bargaining expenses. These expenses include the CTA magazine “The California Educator,” despite the publication’s intense political tone and messages.

Annually, non-union member teachers can opt-out of the mandatory dues, but the law suit contends that the process is complicated and exposes teachers opting out to harassment.

The suit argues there is no compelling reason to continue that agency shop process.