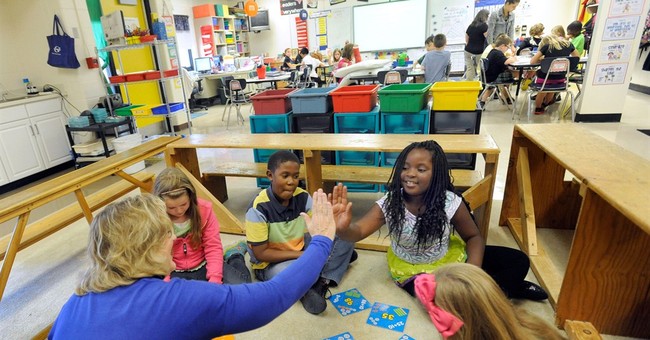 Students in Jefferson County, Colorado began walking out of school last week to protest a proposal to ensure that the Advanced Placement program’s history classes "promote citizenship, patriotism ... (and) respect for authority." Simultaneously, the nation was observing “Banned Books Week,” intended to shine a spotlight on campaigns to remove controversial books from libraries, including at schools.

What do these things have in common? When you force diverse people to support a single system of schools, conflict is constant. People have to fight for teaching they want, or to defeat what they do not.

Jefferson County’s situation is actually just the most visible manifestation of a national tussle that has been going on for months. People who want their children to get a generally positive, fact-filled version of U.S. history have been fighting Advanced Placement changes that seem to focus on the negative and ignore major figures like Benjamin Franklin and Martin Luther King, Jr. On the flip side, many people fear history will be whitewashed – including, it seems, many Jefferson County students – if “traditionalists” have their way.

Of course, conflicts over any curriculum are nothing new. There was a huge outcry in the 1990s over U.S. history standards commissioned by the federal government. Throughout the 1980s and 1990s the nation was embroiled in “culture wars” largely fought in and around class syllabi. And it has been almost 90 years since the famous Scopes “Monkey” Trial over the teaching of evolution.

Book “banning” is a symptom of the same disease: People have numerous, inherently subjective opinions about what is acceptable for children to read, so they fight over what books are in school libraries, or on class reading lists.

Of course, it violates basic American values to have government choose winners and losers among speakers, which is why the idea of banning a book is so hateful. But when districts choose to purchase one book and not another they are already picking winners and losers. And when they assign specific readings they are, in fact, imposing speech on children. Book “banners,” then, are often trying to protect their rights as much as are book defenders.

Thankfully, things don’t have to be this way. Diverse Americans should be able to access education consistent with their values rather than being forced to fight over what their children will learn.

For a long time we approximated this with local control of public schools. When small communities of largely similar people control schools, it enables them more easily to teach in ways acceptable to all.

But local control has slowly withered. In 1939 there were roughly 117,000 school districts serving an average of 1,120 people each. Today there are roughly 13,500 districts with 23,000 people per district. In addition, since the 1990s states – largely forced by the federal government – have taken control of curricula. And with the federally coerced Common Core standards, Washington is on the verge of dictating to every public school.

So, local control is essentially gone. But it was never even close to ideal. Even small communities can contain significant diversity, and minorities can be imposed upon. That’s why school choice for all is essential: it empowers individuals to make their own decisions. Instead of fighting, those who want religious education could select religious schools. Those who think oft-challenged books like “The Adventures of Huckleberry Finn” are essential reading could select schools that embrace them. And those who want America-affirming history courses could seek them out.

One fear is that the country would splinter. But public schooling has long been dominant and yet polls and politics suggest Americans are often deeply divided. Meanwhile, history indicates that Americans have united largely in spite of public schooling, which long excluded many racial and ethnic groups, and marginalized Roman Catholics to the point where they started their own school system.

What provided the glue? To thrive, especially in business, people voluntarily worked with others, which required adopting prevailing norms. What it did not require was sacrificing cherished values and customs.

Forcing people to fight is inherently divisive. And by its very nature, that is what public schooling does.