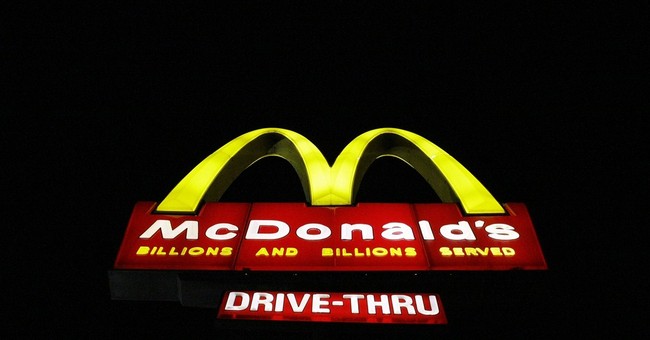 Yesterday Townhall.com published a column by yours truly that, by all accounts, was well received by Townhall readers. The topic was the leftist attack on McDonalds over minimum wage issues. You can read that column here.

Usually I take a hike for a while after submitting column to Townhall. Too much of my insensitivity can cause emotional problems among proggies, and I am, after all, a compassionate man. Besides, I don’t want to wear out my welcome here.

Well, here we are .. the day after .. and I just have to chime in with more on this McDonald’s minimum wage issue. Why? Because the Huffington Post published an opinion piece yesterday that was so void of intellectual discipline that one might have thought it was written by a gerbil scampering across a keyboard. The reality, though, is worse. The piece was actually written by an undergraduate student at the University of Kansas .. you know, one of those brilliant young know-it-alls who are ready to run the world just two years after moving out of their mommy’s house.

So … what has me so exercised this time? Yesterday it was a woman with a baby demanding that McDonald’s pay her not what she was actually worth to her employer, but what she believes she needs to properly raise her spawn … a child she cannot afford.

This time it’s the learned opinion of the UK undergrad who believes that McDonald’s can double the income of every employee – including the CEO – by raising the price of the Big Mac from $3.99 to $4.67. Yup! You got it! Just increase all prices of McDonald’s products by 17% across the board and you can double everyone’s salary!

The shockwaves from this amazing piece of economic Bolshoi were immediate! Across the country CEOs were stunned by the sudden realization that all they had to do to double the salary of every employee was to simply raise the price of whatever services or products they sold! Golly! It’s all so simple! Why hadn’t anyone thought of this before?

Well maybe the reason that nobody has thought of this before is because most multi-billion dollar businesses aren’t run by college undergraduates who wouldn’t know a good business idea from a Che Guevara poster.

Maybe we have some college undergrads reading this right now who are wondering why I’m slamming this idea. Who knows? Maybe the editors of The Huffington Post are wondering where they went wrong publishing this drivel. How, after all, could anybody be against such a brilliant idea that will double the wages of the poor, poor, pitiful poor?

Let’s just walk through a few logical steps that would follow such an idiotic ploy.

1. McDonald’s doubles everyone’s salary by raising all prices by 17%. Burger flippers are now earning $15 per hour.

2. The price of virtually all McDonald’s items rise. This means more money out of the pockets of all who shop at McDonalds. If a family of four comes in for four Big Macs, fries and some drinks the price increase could equal somewhere around $4.50 or more. Not small change for many people.

3. Workers at other fast food companies quickly abandon their jobs to travel across town so they can work for twice the bucks at McDonald’s!

4. Wendy’s, Burger King, Popeye’s and other culinary castles quickly raise their hourly wages to meet the McDonald’s challenge! Prices go up at these fast food emporiums as well! Now no family can go out for a burger without paying more.

5. Minimum wage workers in other areas, principally retail, learn of the higher wages that can be had by memorizing the line “Would you like French fries with that?” They quit their jobs to search for the fast-food worker’s paradise.

6. In order to keep employees working in retail establishments employers have to effectively double their wages, just as McDonald’s and the rest of the fast-food industry has done. This, of course, means that prices of virtually everything that is sold in retail stores will have to be raised. Now the family that started out paying an extra $4.50 for a meal at McDonalds is experiencing a similar price increase on pretty much everything they buy at the retail level.

7. Many unions have contracts with employers that are based on a multiple of the prevailing minimum wage. If the minimum wage goes up, union salaries go up by a similar percentage. You can only imagine what would happen to some union wages under this scenario, and the resulting price increases to compensate for these increased wages would be incredible. The price increase on a union-made automobile would be substantial.

8. So, as a result of McDonald’s playing this undergrad student’s silly game we find retail prices for basic consumer goods increasing pretty much across the board. The minimum wage workers who benefitted from this ruse soon find themselves with pretty much the same purchasing power they had before.

9. To top this scenario off, some businesses discover that the economics of the marketplace simply will not allow them to raise their prices enough to cover the wage demands brought on by this scenario, and they simply go out of business. Who knows how many jobs will be lost.

All this because some undergrad student at Kansas comes up with a spectacularly brain-dead idea that gets published on The Huffington Post and then drooled over by ignoranus Democrats and assorted leftists who couldn’t tell the difference between a P&L statement and a valet parking ticket.