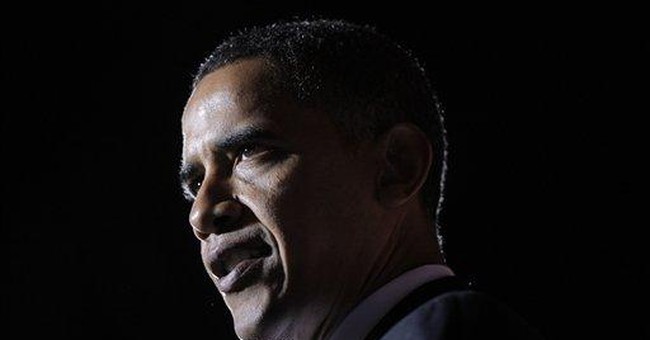 The election is now eight days way.  If you've made up your mind for Obama; or if you're trying to noodle through some of the things he's been saying on the campaign trail, this should help.  And if you’re voting for Obama, clearly you need help.   I've taken four statements that The Chosen One repeats at almost every campaign rally. Now these statements are pretty powerful ... if unchallenged ... and we know that the MoveOn Media isn't exactly what we would call "eager" to challenge God's Candidate on any of these issues.

So, here we go again .. this simple talk show host (right wing, hate-filled shock jock, I believe they call us) is going to use some basic logic and the ability to actually read newspapers to catch you up to speed on just what the Big BO is saying here.  Now if you're educated in our wonderful government schools you may find this challenging.  Stick with it. In spite of what the government has done to you, you can generate some new brain cells that will help you deal with this stuff.  It would also help if you got your campaign news from somewhere other than Saturday Night Live.

Here we go, front and center with Barack Obama!

This Obama promise has already been pretty much debunked in the media.  The problem is that it hasn't been debunked on the Black Entertainment Television network or on Inside Edition or Entertainment Tonight.  Until these television outlets bring forth the facts most of Obama's supporters won't know the truth.

And what is the truth? The truth is that almost one-half of working Americans eligible to vote don't pay federal income taxes in the first place.  This brings forth the interesting question of how do you cut taxes for people who don't pay taxes.  What Obama has done here is change the definition of "tax cut."

It used to be that when the government walked up to someone who had just received their paycheck and said 'Gimme some of that," and the government then gave that money to someone else who had not earned it; that was called welfare.  Now apparently you can't get welfare if you're working ... so we'll just call it income seizure and redistribution.  Under Obama a couple earning, for example, $70,000 and owing no federal income taxes at all will get several checks from Obama's federal taxpayer-funded treasury.  These checks will be called "tax cuts."

So .. for those who don't pay taxes, here are some of the "tax cut" checks you’ll be getting from The Chosen One.  I'm taking some literary license here and replacing the words  "tax credit" with the word "payment."  That literary flourish brings us much closer to the truth.  Here are your goodies; come and get ‘em:

There you go ... Obama's "tax cuts."  Sounds pretty good, doesn't it.  Well, I guess it is, if you're not too successful it IS pretty good.  Remember, the harder you work the lower these payments get.  Barack Obama's tax plans are all about punishing success and rewarding failure.  He understands that if it weren't for failures, Democrats would be scrounging in the alleys for votes.

Once people started hearing that the very people that Obama wanted to raise taxes on are the people we depend on for jobs, The BO campaign had to come up with a line to neuter the "small business" argument.  Barack Obama knows he's in trouble if  the voters find out that 70% of all extant jobs are in the small business sector and that 80% of all new jobs are coming from small businesses.  So, Obama comes up with this line about 95% of small businesses not paying any more taxes under his plan.

Here's the trick.  Let me illustrate reality with a simple comparison.  Let's say that we have 1000 small businesses. About 950 of them, that would be 95%, employ one or two people each for a total employment figure of 1,200.  Now let's assume that the other 50 businesses employ anywhere from 20 people to hundreds of people for a total of about 250,000 workers.  If someone comes along and says 95% of small businesses won't be affected by his tax increases, how do you feel?  You know that the tax increase is going to slam those businesses that employ 250,000 workers, while leaving the 95% of businesses that employ just 1,200 people alone.  Quite a deal, huh.  Aren't you impressed?

"John McCain voted with George Bush 90% of the time."

First of all, George Bush doesn't cast votes in the U.S. Senate, though McCain and Obama do.  The best way to judge how they vote is to see how often they vote with their respective parties.  You might want to get those nuisance resolutions proclaiming the need for a colonoscopy every once in a while out of the way.  That would leave some key votes for you to consider.  The Congressional Research Service did the work.  They looked at votes for Obama and McCain on KEY issues.  The results?  Barack Obama voted with Democrats 97% of the time.  John McCain voted with the Republicans 79% of the time.  Now .. just sit on your hands and wait for the MoveOn Media to report that one.  Sit on your hands, but for God's sake don't hold your breath.

Now that wasn't too hard, was it?

Now .. just in case you've read something here, heard something on my show or gathered some information from some other source that might cause you to switch your vote from Obama to McCain ... just remember.  You're a racist.  There is only one reason NOT to vote for Barack Obama, and that's if you're a robe-wearing, cross-burning Klansman.  Just so you know.  You’re going to have that on your conscience.