Mytheos Holt
|
Posted: Oct 30, 2018 12:01 AM
Share   Tweet
The opinions expressed by columnists are their own and do not necessarily represent the views of Townhall.com. 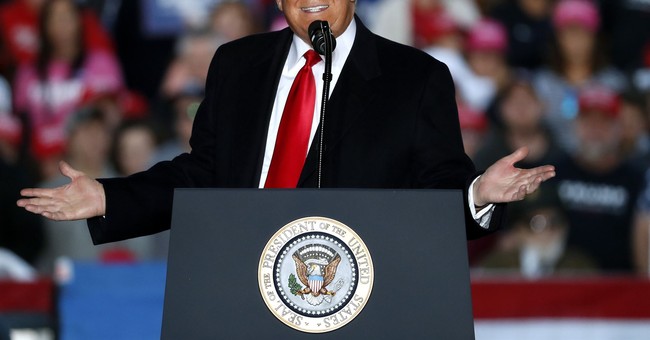 The Trump administration is on the verge of a genuine diplomatic coup with its negotiation of the US-Mexico-Canada Agreement (USMCA), colloquially described as the “new NAFTA.” By all accounts, the new trade deal very much adheres to the “America First” line of President Trump’s administration: specifically, it favors American car companies and farmers, and even enters heterodox territory by offering terms favorable to American labor unions.

This much is Trumpian to its core: that is, it revises NAFTA in ways that favor the industries and organizations geared at helping the so-called “Deplorables.” Those who support Trump’s orthodoxy-busting worldview should cheer.

That being said, there are troubling signs about the treaty, one of which has already been spotlighted in a report from USA Today: namely, that two thirds of the treaty’s language appears to have been lifted from the Trans-Pacific Partnership (TPP), a multilateral trade agreement that President Trump rightly rejected at the start of his term. In said report, Trump’s trade representative, Robert Lighthizer, argues that USMCA improves on TPP by forcing more open trade in the automotive and dairy realms. Fair enough, but unfortunately, this misses some of the key issues with TPP, which appear to have made their way into the USMCA, unscathed.

I refer specifically to its provisions on intellectual property. Unlike the sops to American dairy, American cars, American farmers, and even arguably American unions, this particular set of policies will only benefit institutions that actively seek to harm the president’s agenda and, more importantly, his supporters. The copyright provisions, for example, appear to have been lifted straight off of Hollywood’s wish list, in particular by further extending the shelf life of copyright, so as to permit the death grip of studios on ideas whose original authors have long since passed away. It is one thing for President Trump to help unions, whose members make up the forgotten class of Americans he spoke for. It is quite another to help the industry that constantly manufactures entertainment meant to be a thumb in the eye of those forgotten Americans, and whose awards shows function as gigantic anti-Trump infomercials, excusable only because of their cringeworthy content. Someone remind President Trump it’s been a long time since he was up for an Emmy.

But more important, and more troubling for the president’s agenda, are the terms that USMCA applies to brand name drug companies. That is, USMCA doubles the amount of time in which drug companies possess exclusive rights to sell their medicines. It also doesn’t include a provision whereby generic drug companies can begin research and development in advance of those exclusive rights expiring, so that they will have generic versions ready when those rights do expire. It omits any incentive to challenge bogus patents. These last points are important, because such provisions do exist in the United States, meaning that USMCA is more favorable to drug companies than even the United States’ current law is.

This approach makes no sense in terms of President Trump’s political interests, or in terms of furthering his agenda. Pharmaceutical companies were historically hostile to the president during his run for office, favoring his opponent by more than every single other candidate who ran in either primary. This is not a group that it makes sense for President Trump to reward, unless that reward somehow helped his agenda in an unrelated way.

But it doesn’t. After all, one of the key planks of President Trump’s agenda is to decrease drug prices. But those high prices are sustained by drug companies’ reliance on (and abuse of) intellectual property protections like the ones being floated in USMCA. Except, as already noted, the provisions in USMCA are more draconian than the ones enjoyed here in the US by virtue of what they leave out. From the perspective of lowering drug prices, this is rather like saying you’re going to run a marathon, and then starting a half mile back from the starting line and lopping off a couple of your own toes.

Fortunately, USMCA can be fixed, and these islands of cronyism can be removed from the picture. President Trump deserves to negotiate a trade deal as his legacy that serves the struggling Americans who make up his base, not the donor classes who despise him. One only hopes that he and his administration will have the political will to do so.