Mytheos Holt
|
Posted: May 17, 2017 10:03 AM
Share   Tweet
The opinions expressed by columnists are their own and do not necessarily represent the views of Townhall.com. 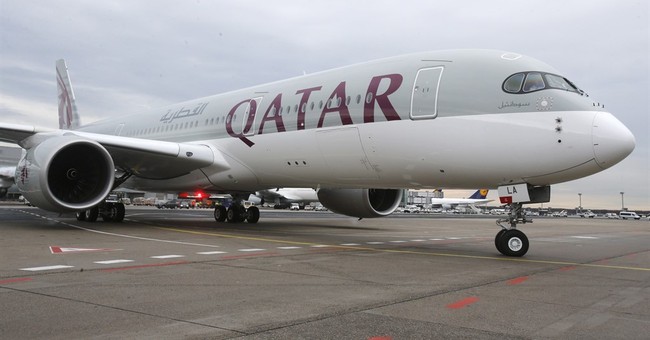 President Trump is set to visit the Middle East next week, and if early indicators are any guide, this will be no Obama-style “apology tour.” If anything, it’s more likely to be a tour that demands apologies from most of the countries being visited.

Yet, surprisingly, one particular offense seems to have slipped through the White House’s fingers in figuring out what to address: namely, the unrepentant abuse of America’s airline sector by its Middle Eastern competitors through rampant violations of America’s Open Skies pacts.

If you don’t know what Open Skies pacts are, fear not, explanation follows. Open Skies agreements are decades old multinational agreements created to encourage much-needed competition in the airline marketplace. They do this by providing expanded access to airways across the globe, which in turn lower costs for consumers.  In essence, they amount to a series of rules that multiple countries agree to in order to foster travel and fair competition for their respective airline industries. And in theory, that should be the end of the story.

But it isn’t. Because when it comes to transparency and an open market, the reality is that the current system is being exploited, and has been exploited for more than a decade in some cases. In fact, as far back as 2004, the Qatari government and monarchs of the UAE have been subsidizing state-owned Qatar Airways, Etihad Airways and Emirates to the tune of $50 billion, in direct violation with our trade agreements – and that’s just what we can trace.

From a competitive standpoint, this is like outfitting an Olympic runner with a steroid pumping hidden IV drip, and it needs to stop. We need a leveling of the playing field – and true free market competition, which was the whole point of U.S. Open Skies agreements to begin with.  Why should domestic U.S. air carriers be expected to go up against corrupt Persian Gulf competition that’s been juiced with subsidies, removed from shareholder accountability, and armored with a barrage of anti-competitive tactics? Not only is such a state of affairs ludicrously unfair, but it also costs consumers, since both Delta and United were forced to cancel their U.S. flights to Dubai last year, partially cutting off air commerce with the UAE and likely ruining millions of peoples’ spring break in the process.

And it’s not just the US that is subject to this kind of predatory behavior from Gulf state airlines. They’re violating pacts with other nations as well. Arabian Business reported just this week that Emirates has been accused of violating their air services pact with India by flying more passengers than they should be able to accommodate.  Many countries in Europe, and our northern neighbor Canada, have stood firm in enforcing their  agreements and penalized Gulf airlines for violations by placing restrictions on the number of round-trip passenger flights each week.  This isn’t protectionism, it’s free market self-preservation. And it’s just the kind of thing President Trump was elected to fight against.

Gulf airline expansion comes at the expense of U.S. and European carriers, who operate within the norms of a free market, and if the Trump administration doesn’t hold these countries to account on Open Skies, things are set to get a lot worse.  Trade Arabia reports that currently, there is $57.4 billion worth of active aviation projects taking place in the Middle East, no doubt to flood our airways with more half-empty planes.

These Open Skies violations are crippling.  For every long-haul route lost or foregone by our domestic carriers as a result of subsidized Gulf carrier competition, more than 1,500 good American jobs are lost, and exploitation of these agreements directly impact the 11 million jobs and $1.5 trillion in nationwide economic activity U.S. airlines support.  This is hardly an “America First” style outcome.

President Trump, on his first trip overseas, would do well to remember the kind of economic carnage these kinds of practices can produce for hard-working Americans, and how the actions of these Gulf airlines literally threaten our airline industries’ ability to keep planes in the air.  It’s time for President Trump to send a clear message that there is a new sheriff in town: these countries may fly fairly, or they may face the turbulence and headwinds of U.S. sanctions.