Myra Kahn Adams
|
Posted: Jun 19, 2022 12:01 AM
Share   Tweet
The opinions expressed by columnists are their own and do not necessarily represent the views of Townhall.com. 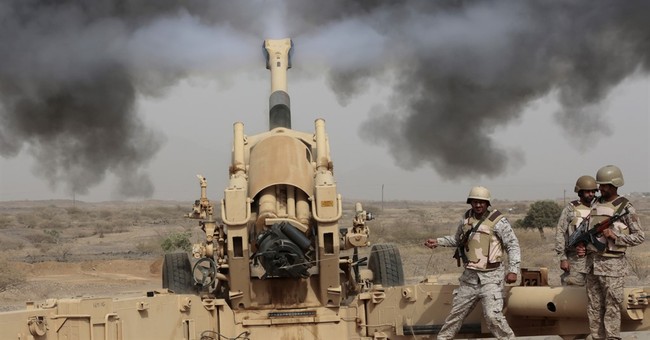 Author's Note: Readers can find all previous volumes of this series here. The first 56 volumes are compiled into the book "Bible Study For Those Who Don't Read The Bible."  Part Two with volumes 57-113 will be published later this year.

Thanks for joining us. Last week we studied the phrase "Peace be with you," often associated with Jesus, and today we focus on the flip side.

As a history buff, I have studied various wars and hate them all — a sentiment also voiced by World War II General and later President Dwight D. Eisenhower:

"I hate war as only a soldier who has lived it can, only as one who has seen its brutality, its futility, its stupidity."

And from Machiavelli's 1513 classic book "The Prince”:

“There is no avoiding war; it can only be postponed to the advantage of others.”

The sad reality that war is part of the human condition is found throughout the Old Testament/Hebrew Bible:

“To everything there is a season, A time for every purpose under heaven… A time to love and a time to hate, a time for war and a time for peace” (Ecclesiastes 3:1-8). (See Vol. 102 about this passage and the famous song it inspired.)

Old Testament critics often point to the excessive amount of war and bloodshed therein. Yes, God allowed the battles and savagery to occur and determined the outcome — both victory and defeat of His people, the Israelites.

For example, in the book of Exodus, while Moses’s men led by Joshua fought the Amalekites — the Israelites' sworn enemy — Moses appealed to God by doing this:

“Whenever Moses held up his hand, Israel prevailed, and whenever he lowered his hand, Amalek prevailed. But Moses's hands grew weary, so they took a stone and put it under him, and he sat on it.” (Exodus 17: 11-12).

More astonishing in the book of Joshua is how God intervened in Israel's conquest of the Promised Land. General Joshua asked God to provide more daylight hours to help God’s people win a crucial battle:

“And the sun stood still, and the moon stopped, until the nation took vengeance on their enemies...The sun stopped in the midst of heaven and did not hurry to set for about a whole day. There has been no day like it before or since, when the Lord heeded the voice of a man, for the Lord fought for Israel” (Joshua 10: 1-15).

Let’s repeat that final jaw-dropping verse: “There has been no day like it before or since, when the Lord heeded the voice of a man, for the Lord fought for Israel.”

To recap, there will always be war. God allows wars to happen, and His hand determines the winner and loser “for every purpose under heaven.” That is harsh, but don’t question God. He is in control. God is God, and you are not.

We move from the “Warrior God” of the Hebrew Bible to the New Testament’s war against evil under the command of General Jesus. (See Vol. 89 about the connection between “General Joshua” and “General Yeshua,” a.k.a. Jesus — who both established the Kingdom of God on earth.)

Always remember that Jesus’s ministry is about His war with the devil, as the apostle John reminds us:

“The one who does what is sinful is of the devil because the devil has been sinning from the beginning. The reason the Son of God appeared was to destroy the devil’s work” (1 John 3:8).

Previously in Vol. 104, I wrote about the war between Jesus and Satan during the “Temptation of Jesus”:

“Jesus rejects the devil’s offer to worship him and have power over ‘all the kingdoms’ with their ‘authority and splendor’ without first suffering and dying on the cross. Note that Jesus does not argue or contradict the devil’s claim that he possesses power over all the kingdoms.” And Jesus told the devil:

“‘And do not fear those who kill the body but cannot kill the soul. Rather fear him who can destroy both soul and body in hell’” (Matthew 10:28).

Jesus’s war against the forces of evil was succinctly stated in a passage we discussed last week. However, that controversial passage appears contrary to the Jesus of “Peace be with you” and bears repeating:

Since Jesus’s fight against the devil is all encompassing, family relationships could be considered collateral damage.

Also, in Matthew, Jesus talks about war unlike war in the Old Testament. Here the disciples asked Him about the “sign of your coming and of the end of the age”:

“Jesus answered them, ‘See that no one leads you astray. For many will come in my name, saying, “I am the Christ,” and they will lead many astray. And you will hear of wars and rumors of wars. See that you are not alarmed, for this must take place, but the end is not yet. For nation will rise against nation, and kingdom against kingdom, and there will be famines and earthquakes in various places. All these are but the beginning of the birth pains’” (Matthew 24: 4-8).

Those “birth pains” are the sufferings that will precede His return. Read how that works out in Revelation 12:7-11.

Today we know that upon His Resurrection, Jesus triumphed in His war against Satan. Therefore, no matter what wars are raging in the earthly world — including personal battles with Satan over a multitude of sins, addictions, or family conflict — Jesus tells us to look to Him for comfort:

“I have said these things to you, that in me you may have peace. In the world you will have tribulation. But take heart; I have overcome the world" (John 16:33). Amen!

Myra Kahn Adams is a conservative political and religious writer with numerous national credits. Her book, “Bible Study For Those Who Don’t Read The Bible,” reprints the first 56 volumes of this popular study. Myra is also Executive Director of SignFromGod.org, a ministry dedicated to Shroud of Turin education. SignFromGod was a proud sponsor of the Museum of the Bible’s opening events for its high-tech exhibition about the Shroud of Turin, open through July 31. Contact: MyraAdams01@gmail.com or Twitter @MyraKAdams.