Myra Kahn Adams
|
Posted: Mar 07, 2021 12:01 AM
Share   Tweet
The opinions expressed by columnists are their own and do not necessarily represent the views of Townhall.com. 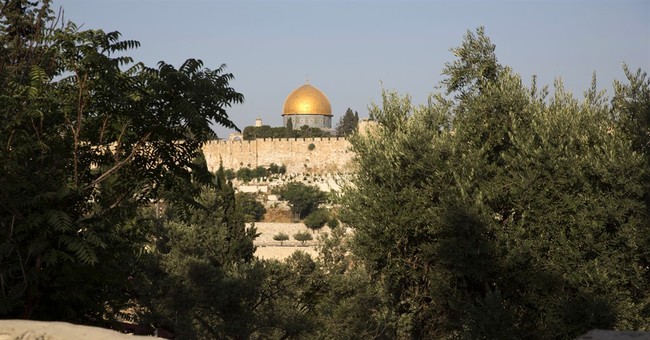 Easter is April 4 and fast approaching. Therefore today, and the next four Sundays, our focus is on Scripture that prepares us for the greatest miracle in history — the Resurrection of Jesus Christ. This act of God changed the world, impacting humankind forever.

Two days before His Resurrection, Jesus was sacrificed on the cross. Christians believe that because of His love for us, He took upon Himself the sins of the world, offering forgiveness and everlasting life.

Recorded in John’s Gospel is one of the Bible’s most famous and oft-quoted verses where Jesus summarizes why we must believe in Him:

“For God so loved the world, that he gave his only Son, that whoever believes in him should not perish but have eternal life”(John 3:16).  (See Vol. 32 for more details.)

To better understand Jesus’ words and the link to the Hebrew Bible, let us go back to around 2054 B.C. and study a significant event chronicled in Genesis Chapter 22 – the sacrifice of Isaac by his father, Abraham. (Spoiler alert, almost sacrificed.)

The opening verses explain why “Abraham Tested” is the chapter’s subtitle:

“Sometime later God tested Abraham. He said to him, ‘Abraham!’ ‘Here I am,’ he replied. Then God said, ‘Take your son, your only son, whom you love — Isaac — and go to the region of Moriah. Sacrifice him there as a burnt offering on a mountain I will show you’” (Genesis 22: 1-2).

How cruel is that? God appears to be telling Abraham to burn his son to death. (Readers unfamiliar with this story are glad there was a spoiler alert!)

Did you notice that in the first verse (Genesis 22:1), some words and phrases sound familiar to what Jesus said over 2000 years later?

With “trust” in the subtitle, remember that Abraham totally trusts God after a recent covenant between them when God declared:

Abraham proceeds to follow God’s orders bringing Isaac to the “region of Moriah” and “a mountain I will show you.”

Today in Jerusalem, that mountain is called Mt. Moriah  — an important site throughout the Hebrew Bible and thought to be where King Solomon built the First Temple in 957 B.C.  According to the Jewish Virtual Library, “reputedly the site of the Temple's Holy of Holies, the supreme embodiment of the relationship between God and the people of Israel.”

Today, and over the last 1,000 years, the golden Dome of the Rock — an Islamic Shrine — is situated on this land. Completed in 1023, the Dome is recognized as the architectural symbol of Jerusalem on sacred ground considered the most contested in the world.

Then Abraham builds the altar where he is prepared to sacrifice his son. “He bound his son Isaac and laid him on the altar, on top of the wood.” Abraham proceeds to do the unthinkable. He “took the knife to slay his son. But the angel of the LORD called out to him from heaven, ‘Abraham! Abraham!’ ‘Here I am,’ he replied. ‘Do not lay a hand on the boy,’ he said. ‘Do not do anything to him. Now I know that you fear God, because you have not withheld from me your son, your only son.’

“Abraham looked up and there in a thicket he saw a ram caught by its horns. He went over and took the ram and sacrificed it as a burnt offering instead of his son. So Abraham called that place The LORD Will Provide. And to this day it is said, “On the mountain of the LORD it will be provided” (Genesis 22: 9-14).

God is pleased with Abraham’s allegiance, declaring “that because you have done this and have not withheld your son, your only son, I will surely bless you and make your descendants as numerous as the stars in the sky…. through your offspring all nations on earth will be blessed, because you have obeyed me” (Genesis 22:15-18).

A happy ending, but what does this Genesis story have to do with Jesus? What follows are not “coincidental” connections.

Second, Father Abraham and God the Father allow and lead their sons to be sacrificed, and both sons are obedient.

Fourth, the sacrifice is provided by God for both Isaac and Jesus. Abraham says, “God himself will provide the lamb for the burnt offering, my son.” (Notice “my son” has a double meaning.) Conversely, Jesus is the “lamb of God” — the son who is sacrificed, not saved like Isaac — but Jesus “saves” believers through His Resurrection. Recall when John the Baptist “saw Jesus coming to him and said, ‘Behold, the Lamb of God who takes away the sin of the world!’” (John 1:29).

There are countless parallels and Messianic prophecies found throughout the Old Testament and fulfilled in the New — solidifying my Jewish belief that Jesus is the Messiah. Moreover, Jesus stated His teachings were only to be shared with His Jewish people, saying, “I was sent only to the lost sheep of Israel” (Matthew 15:24). However, that earthly plan was altered.

Thanks for joining me today, and stay tuned as we count down to Resurrection Sunday.