Myra Kahn Adams
|
Posted: Feb 28, 2021 12:01 AM
Share   Tweet
The opinions expressed by columnists are their own and do not necessarily represent the views of Townhall.com. 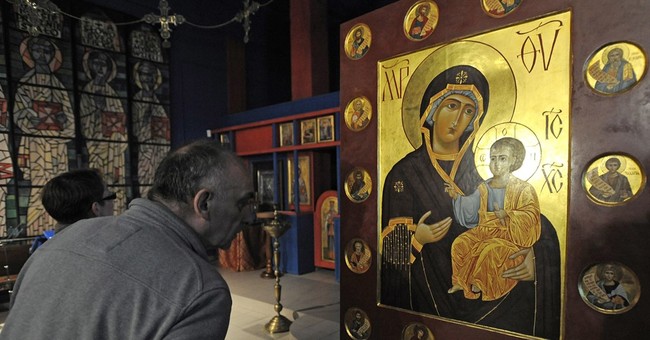 Today, we reach Vol. 50 of these studies. Therefore, I must thank: Lord Jesus Christ, Townhall editors and management, loyal readers –  including those who send me inspiring personal Gmails, and husband David for his thoughtful edits.

Over the last year, readers have asked, “Where is Vol. 1?” The topic was Melchizedek, but not headlined “Vol. 1” when posted on RedState in Sept. 2019. Then, last year, when the first study was transferred to Townhall and chronologically inserted into my archive, it was distanced from Vol. 2, dated Feb. 2, 2020. Now, to “celebrate” Vol. 50, I felt called to again write about “Melchizedek” and connect to Vol. 1 given my fascination with the controversy surrounding his brief appearance in Genesis.

Is Melchizedek the pre-figuration of Jesus in the Hebrew Bible? For centuries, scholars have debated that question, and I believe the answer is “yes.”

Seeking confirmation, I asked Jonathan Cahn, a Messianic Jewish Rabbi who leads Hope of the World ministries. He is also a #1 best-selling author of the Harbinger series with a popular YouTube channel.

Rabbi Cahn responded: “I definitely believe Melchizedek is a type and foreshadow of Messiah – a marker and placeholder for the day when there would come one who was both priest and king at the same time – the Messiah. And also believe the Book of Hebrews makes clear that Melchizedek was not the Messiah – but one made to ‘resemble’ Him. Nonetheless, Melchizedek remains one of the most fascinating and mysterious figures in the Bible.”

Rabbi Cahn’s opinion is acknowledged and appreciated. Now let’s read about Melchizedek in the verses chronicling his first and only appearance. Note the unusual Bible protocol for a “king” to suddenly appear with no introduction or lineage:

Then Melchizedek king of Salem brought out bread and wine. He was priest of God Most High, and he blessed Abram, saying, “Blessed be Abram by God Most High, Creator of heaven and earth.

And praise be to God Most High, who delivered your enemies into your hand.” Then Abram gave him a tenth of everything (Genesis 14:18-20).

The verses mention two actions integral to the beliefs of all Christ-centered denominations – the Eucharist and tithe.

But before we discuss those, let’s establish what the Bible says about the identity of “Melchizedek king of Salem.”

Recorded in the New Testament Book of Hebrews around 2,152 years after Genesis, Melchizedek’s name and lack of lineage are explained:

First, the name Melchizedek means “king of righteousness”; then also, “king of Salem” means “king of peace.” Without father or mother, without genealogy, without beginning of days or end of life, resembling the Son of God, he remains a priest forever (Hebrews 7:2-3).

For Melchizedek’s first act, why does he bring out “bread and wine”?

What exactly is the Eucharist? Approximately 2,114 years after Melchizedek, the Eucharist replicates Jesus presenting the bread and wine as His body and blood during a Passover Seder known as The Last Supper. After breaking the bread, Jesus said, “This is my body given for you; do this in remembrance of me.” Then, holding the wine cup, He said, “This cup is the new covenant in my blood which is poured out for you” (Luke 22:19-20).  After the Last Supper, Jesus was betrayed and crucified the next day.

Melchizedek’s initial presentation of bread and wine mirrors Jesus’ first presentation of the “Lord’s Supper” at the Last Supper. And hold that thought about when Jesus mentions the “new covenant.”

Another way Melchizedek resembles Jesus is by being fully God and fully Man witnessed by the blessing and prayer he gives Abram.

First, the blessing verse reveals more about Melchizedek: “He was priest of God Most High, and he blessed Abram, saying, “Blessed be Abram by God Most High, Creator of heaven and earth.” My interpretation – Abram is personally being blessed by God.

Followed by: “And praise be to God Most High, who delivered your enemies into your hand.” Again my interpretation – the “man” Melchizedek is praising God for what God did for Abram.

How did Abram thank God? – “Then Abram gave him a tenth of everything.”  Melchizedek didn’t even have to ask! Thus the 10% “tithe” was established for believers to honor God by giving back a small portion of what He has given.

The final way Melchizedek resembles Jesus is what happens in the next Chapter 15 of Genesis: On that day the LORD made a covenant with Abram and said, “To your descendants I give this land, from the Wadi of Egypt to the great river, the Euphrates.." (Genesis 15:18).

Before that, God took Abram outside, telling him, “Look up at the sky and count the stars” and “So shall your offspring be” (Genesis 15:5).  Soon after, God said:

“No longer will you be called Abram; your name will be Abraham, for I have made you a father of many nations” (Genesis 17:5).

God’s covenant with Abraham is followed about 2,100 years later by Jesus’ new covenant. At the Last Supper, Jesus presents bread and wine – his body and blood – soon to be sacrificed for the forgiveness of sins and promise of eternal life for those who believe in Him.

Have I made a case for why Melchizedek is the prefiguration of Jesus in Genesis?

Rabbi Cahn agrees for these four reasons: “Melchizedek is King of Salem/Jerusalem - King and Priest at once - Priest of God Most High - Serves the Bread and Wine.”

But then Rabbi Cahn wrote, “I don’t see Melchizedek as a pre-incarnation.” And on that point, we both agree since believers know “He [Jesus] was with God at the beginning”  – unlike Melchizedek, who made a brief earthly appearance, completed his essential business, and is never heard from again.

Whatever you think or know about Melchizedek can be augmented by studying Hebrews Chapter 7.

For all the reasons we discussed, Melchizedek remains a compelling figure with a mysterious identity. But ultimately, as Jews, both Rabbi Cahn and I are blessed knowing that Jesus (Yeshua) IS the Jewish Messiah. “And he will reign over Jacob’s descendants forever; his kingdom will never end” (Luke 1:33).  Amen!