Myra Kahn Adams
|
Posted: Jun 07, 2020 12:01 AM
Share   Tweet
The opinions expressed by columnists are their own and do not necessarily represent the views of Townhall.com. 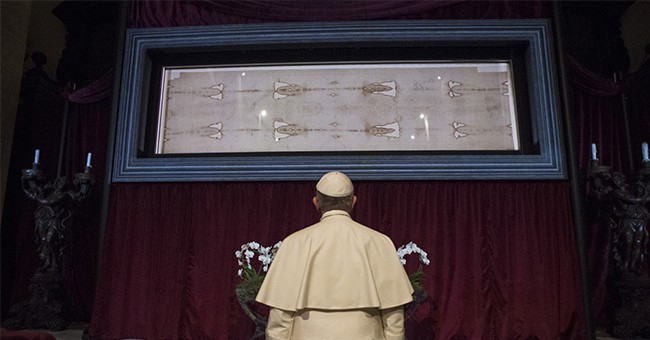 Back in November, my husband and I made travel plans that today would have placed us in Jerusalem for my big birthday celebration in a city I love.

But a changed world and canceled flights call for a holy but non-biblical quote: “How do you make God laugh? Tell Him your plans.”

Therefore instead of visiting the Church of the Holy Sepulchre, — built over the historic site of Christ’s crucifixion and “empty tomb” — perhaps His “plan” for me is to write about my fascination with what the disciples found in the tomb on Easter Sunday as recorded in John 20:6-7.

Of course, I have no idea what God’s plan really is (except saving us money on international travel). However, as part of my birthday celebration, I will explain this favorite and “controversial” passage about a burial cloth that continues to impact my life in many wondrous ways.

Then Simon Peter came along behind him and went straight into the tomb. He saw the strips of linen lying there, as well as the cloth that had been wrapped around Jesus' head. The cloth was still lying in its place, separate from the linen (John 20:6-7).

Central to a study of this passage is that instead of Jesus’ body, the disciples found two cloths “lying there” with “as well as,” clearly indicating a second.

The two cloths are a source of controversy and confusion exacerbated by all the different Bible translations.

Here are some representative examples: Notice that “strips of linen” is quoted above from the popular New International Version, but “linen cloths” appears in the New King James Version. Moreover, “linen wrappings” is found in the New Revised Standard Version.

Millions of Jesus’ followers, myself included, believe that the first mention of “linen” in John 20:6 refers to what is called the Shroud of Turin – measuring 14.6 feet long by 3.5 feet wide, residing today, as it has since 1578, in Turin, Italy’s Cathedral of St. John the Baptist.

After perusing this study, if the Shroud has piqued your interest, I suggest reading the Christianity.com tutorial, “What Is the Shroud of Turin? Facts & History Everyone Should Know,” written by yours truly and Russ Breault.

The tutorial details all the unexplained mysteries, history, science, testing, and undisputed facts about this revered, holy burial Shroud. The cloth bears a faint yellowed image of a bearded, crucified man with bloodstains that match the wounds suffered by Jesus of Nazareth as recorded in all four gospel narratives.

The Shroud is the world’s most studied artifact because scientists have yet to explain or conclusively prove what caused an anatomically perfect, front-to-back mirror image with photo-negative and three-dimensional properties to appear on a two-dimensional cloth. And trust me, the more you learn about the Shroud, the deeper the mysteries become.

Circling back to John 20:6-7, the second “cloth that had been wrapped around Jesus' head,” — also believed to exist today — is known as the Sudarium of Oviedo. In other popular Bible translations, this second and smaller cloth is referred to as a “handkerchief” or “napkin.” It is thought to have covered Jesus’s face immediately after he was removed from the cross.

The Sudarium measures 33 x 21 inches and resides in the Cathedral of the Holy Savior in Oviedo, Spain. It is sometimes referred to as “the other Shroud of Jesus,” but unlike the Shroud, the Sudarium does not display a man’s image.

However, the Sudarium does have a pattern of face and head stains along with the same rare Type AB blood, forensically linking the Sudarium to the Shroud. That was the conclusion of a 2016 scientific study at Spain’s University of Seville, also reporting the Shroud and the Sudarium “almost certainly covered the cadaver of the same person.”

As you can now surmise, the controversy in John 20:6-7 is about whether the two cloths still exist and are, in fact, the Shroud of Turin and the Sudarium of Oviedo.

It is my belief that the Lord has preserved both cloths, especially the mysterious Shroud, for non-believers who may need physical evidence of Christ’s suffering, death, and Resurrection, to come to faith in Jesus, as did “Doubting Thomas” as recorded in John 20:24-29.

Believers in Christ don’t need the Shroud to support their faith. However, it stands to reason that the Lord — with His awesome power and wisdom, knowing the doubting nature of humankind — would leave some evidence of the greatest event in human history, the Resurrection of Jesus Christ.

Earlier, I alluded to how Christ’s burial cloth continues to impact my life and now will explain. The Shroud provides me with a unique way to glorify Him. Having been born Jewish, then converting to Christianity at age 20, for me, the Shroud represents the physical manifestation of how He died for our sins and His love for us. But honestly, I was not aware that the Shroud even existed at the time of my conversion decades ago.

Ultimately, in 2018, passion for the Shroud led to my involvement with the Museum of the Bible in Washington, D.C. And now, targeted to open in February 2021, is a groundbreaking high-tech exhibition about the Shroud that will impact the nation and the world.

Before that, I helped found the SignFromGod.org ministry to educate people about this mysterious “living” burial cloth that continues to baffle science. I do not doubt that future technologies will reveal new, unimagined properties embedded in the cloth, similar to how photography in 1898 and computer developments in the 1970s led to earth-shattering Shroud discoveries.

Today, even though I am not visiting the empty tomb as planned, my evolving faith, love for Christ, and dedication to Shroud education —  as evidence of His Resurrection for those who need proof — continues to grow. And if that is His plan, as we discussed in Vol. 11 of this Bible study series in the words of the Hebrew prophet Isaiah, “Here am I, send me.”