Shroud of Turin: Interview with World’s Leading Expert Who Happens To Be Jewish

Myra Kahn Adams
|
Posted: Mar 08, 2020 12:01 AM
Share   Tweet
The opinions expressed by columnists are their own and do not necessarily represent the views of Townhall.com. 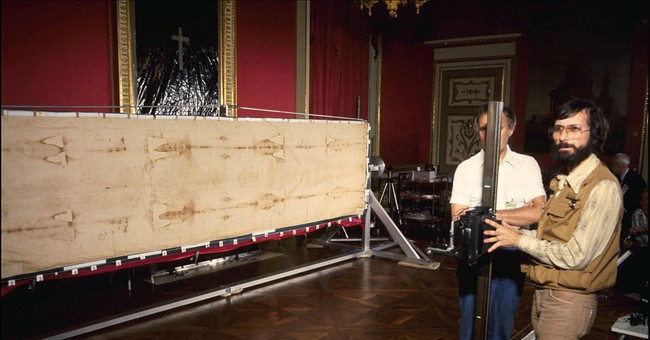 Barrie M. Schwortz is the founder of Shroud.com. Since 1996 it has been the leading Shroud of Turin website and considered the Shroud equivalent of the Library of Congress.

Throughout the world, Schwortz is recognized as the foremost expert on the Shroud of Turin – a 14.6 feet long and 3.5 feet wide linen cloth displaying the mysterious image of a crucified man. Millions of Catholics and members of other Christian denominations believe that the Shroud is the authentic burial cloth of Jesus Christ.

In 1978, Barrie was the Official Documenting Photographer for the Shroud of Turin Research Project (STURP), a scientific team that conducted the first in-depth 20th century examination of the Shroud. (Over 40 years later, the Vatican has failed to authorize a 21st century scientific research project.)

With Shroud.com well established, in 2009, Schwortz founded the Shroud of Turin Education and Research Association, Inc. (STERA), a non-profit 501(c)(3) corporation.  To STERA, Schwortz donated Shroud.com along with his extensive Shroud photographic collection and many significant Shroud resources. His goal was to preserve and maintain Shroud knowledge and materials to be available for future research and study.

Schwortz has appeared on hundreds of Shroud related programs and documentaries on every major broadcast and cable television network. He has addressed thousands of national and international audiences. For decades across the globe, the name Barrie Schwortz continues to be synonymous with the Shroud of Turin.

The following interview was conducted by phone from Schwortz’s Colorado home on March 3, 2020.

Myra Adams: After thousands of presentations about the Shroud of Turin, what is the question you are asked most often?

Barrie Schwortz: Because I was the documenting photographer for the STURP team, I am most often asked, “What do I believe formed the image on the Shroud?”

A difficult answer because the whole purpose of STURP was to ask that question, collect the data, and determine how the image was formed.

In the end, STURP could not answer the question, but the scientists determined what it was not — not a painting, not a scorch, not made photographically. We know of no mechanism that could create an image with those same chemical and physical properties, and no one in the past 42 years has recreated such an image.

For the record, I will read two excerpts from STURP’s 1981 final report conclusions:

“Thus, the answer to the question of how the image was produced or what produced the image remains, now, as it has in the past, a mystery.”

And this jaw-dropping statement:

“We can conclude for now that the Shroud image is that of a real human form of a scourged, crucified man. It is not the product of an artist.”

MA: Your forthcoming autobiography titled “This Was Not My Idea” is about how you, as a Jewish man, became a leading Shroud expert and founder of Shroud.com. Since “this” was not your idea, whose idea was it?

BS: The answer should be quite obvious, and since this was something I was destined to do, the only correct answer would be God. But to qualify – the book’s purpose is to explain that throughout my life, things happened that had to have happened to lead me to my work with the Shroud.

MA: How do you explain the Shroud to fellow Jews?

BS: Interestingly, I rarely, if ever, have the opportunity to explain the Shroud to fellow Jews because fellow Jews are not interested in the Shroud. The only Jews I have met who have expressed a strong interest in the Shroud are Messianic Jews, such as you, Myra. These are Jews who have accepted Jesus as the Messiah and consider themselves “completed Jews.”

Typically, my Jewish friends say that I have done a great job building Shroud.com and educating people about the cloth. But to them, the Shroud does not matter, and they kind of shrug and walk away.

MA: Do you believe that the Shroud is currently experiencing a renaissance with renewed interest? If so, why?

BS: Since I built Shroud.com in 1996, I’ve seen an increase in web traffic and interest over the decades and more recently because of new Shroud museums.

First, is the Museum of the Holy Shroud in Shreveport, LA, featuring the Richard Orareo collection — one of the world’s largest collections of Shroud artifacts. Second is The Shroud Museum in Pigeon Forge, TN.

Then, in California, planning is underway for a major Shroud Center at Christ Cathedral in Orange County. And Myra, of course, I need to mention the “groundbreaking” exhibition about the Shroud of Turin, spearheaded by you and your SignFromGod team, scheduled to open on February 17, 2021, at the prestigious Museum of the Bible in Washington D.C.  God willing, you will see me there!

But most importantly, since the 1988 radiocarbon dating tests [infamously dating the Shroud from between 1260 and 1390], there have been four peer-reviewed scientific articles challenging those results. Now, many people are “coming back” to the Shroud because they realize that the carbon dating conclusions were not valid. It has taken over 30 years for that to occur, but due to mounting evidence, it is widely accepted that the radiocarbon dating was flawed.

MA: Given the Shroud’s numerous mysteries revealed by technology (starting in 1898 when the Shroud was first photographed and when developed, revealed a “positive” image) do you think that there are additional “hidden” properties within the image of the “Man on the cloth” that will be discovered by future technologies?

BS: All of us who have been involved in Shroud research would like to see 21st century technology applied “hands-on” to the Shroud because there are technologies that did not exist in 1978.  Perhaps these new technologies could help answer questions raised by our 1978 data. I don’t know if we will see something that we haven’t seen before, but you never know.

MA: Do you believe that the full-bodied, front to back linear image of the crucified man as seen on the Shroud of Turin is Jesus Christ?

BS: Yes, but it took me 17 years after we completed our work on the STURP team to reach that conclusion in 1995. Honestly, in the beginning, I was skeptical. Now I love to quote my Polish-born Jewish mother who said, “Barrie, of course, the Shroud is authentic — they wouldn’t have kept it for 2,000 years if it had belonged to anyone else —  it wouldn’t have mattered.”  Always listen to your Mama!

MA: Since you are Jewish and do not claim to be Christian, how has the Shroud impacted your faith?

BS: After my bar mitzvah at age 13, I walked away from Judaism, and for many decades, God was not a part of my life. Then in my 50s, after starting Shroud.com, people asked me, “What do YOU believe?” but I did not have an answer. When I finally confronted my own faith and beliefs, I realized that God had been there all along, just waiting for me to acknowledge Him. So how many Jews can say it was the Shroud of Turin that brought them to faith in God?

MA: Barrie, thanks for participating in this interview.