Mona Charen
|
Posted: Jun 15, 2018 12:01 AM
Share   Tweet
The opinions expressed by columnists are their own and do not necessarily represent the views of Townhall.com. 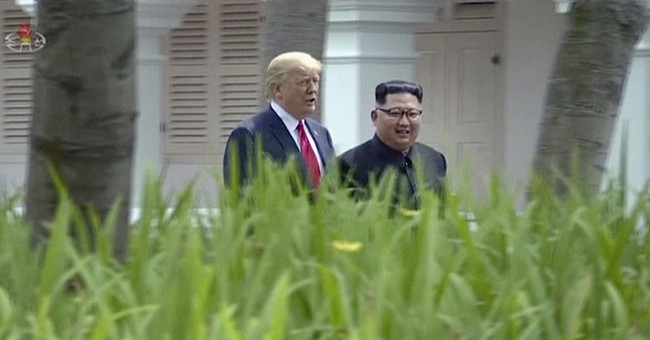 The headline writers adore the word "historic." It was ubiquitous in reporting on the April meeting between Kim Jong Un and Moon Jae-in. Kim shook Moon's hand and then guided him over the military demarcation line to step onto North Korean territory. This prompted swoons. What rot. If that was a bona fide gesture of peaceful intent, time will tell. In the meantime, let's assume it was a stunt.

So, too, with the summit between Kim Jong Un and Donald Trump, though in this case the media hype couldn't compete with Trump's own. He has basked in talk of a Nobel Peace Prize and predicted that he and the butcher of Pyongyang were "going to have a great discussion and a terrific relationship." Obviously panting for a meeting, Trump was reportedly livid with national security adviser John Bolton, whose May comments about a "Libya solution" to the nuclear weapons problem apparently spooked Kim into withdrawing from the summit. Trump insisted that it was he who cancelled, just as he did with the Philadelphia Eagles' White House visit.

But he showed quite a lot of ankle in his note. "I felt a wonderful dialogue was building up between you and me," he cooed, closing with words conceding that it was Kim, not Trump, who had actually cancelled. "If you change your mind having to do with this most important summit, please do not hesitate to call me or write." Kim reeled in his catch. He sent an oversized letter Trump could pose with, grinning like a winner of the Publishers Clearing House sweepstakes.

Why is our president smiling? You can always argue that democratic leaders must treat with dictators and even villains of various stripes for the sake of winning a war or securing the peace. You can even argue that sometimes presidents flatter unsavory leaders to build trust and ease tensions. But no historical comparisons can illuminate Trump's ricochets between hysterical threats ("fire and fury") and pusillanimous praise ("very talented") without any substantive change on the part of the dictator. What has changed since the State of the Union address in which Trump honored the memory of Otto Warmbier and detailed the atrocities of the North Korean regime? In gratitude for the exchange of pleasantries, the release of a few hostages and vague offers of "denuclearization," Trump has made himself Kim's doormat.

As a matter of substance, the Singapore summit achieved less than nothing. It was a profound defeat for U.S. world influence and for democratic decency, arguably the worst summit outcome since Yalta. Kim promised to consider "denuclearization," exactly as his father and grandfather had done repeatedly over the past several decades -- breaking their promises each and every time. For this puff of cotton candy, Trump agreed to halt "U.S. war games" (using the North Korean term for joint military exercises with South Korea), which Trump himself called provocative! He invited Kim to the White House. He also issued the risible tweet announcing, ahem, peace in our time: "There is no longer a nuclear threat from North Korea."

It's difficult to determine just how stupid Trump thinks the American people are. But there is no question that Trump's affection for strongmen and thugs, evident before in his praise of the Chinese murderers of Tiananmen and his warm words for Vladimir Putin, Rodrigo Duterte and Xi Jinping, has now extended to the worst tyrant/killer on the planet. Trump did far more than overlook Kim's atrocious human rights abuses; he became Kim's PR man: "He's a very talented man, and I also learned he loves his country very much." He has a "great personality" and is "very smart."

Trump granted Kim's legitimacy: "His country does love him. His people, you see the fervor. They have a great fervor."

What of all that? Trump is understanding, even impressed. "Hey, he's a tough guy. When you take over a country -- a tough country, tough people -- and you take it over from your father, I don't care who you are, what you are, how much of an advantage you have. If you can do that at 27 years old, I mean, that's one in 10,000 that could do that. So he's a very smart guy. He's a great negotiator."

What was Trump's chief argument in 2016? The U.S. had been the victim of "bad deals" with other countries and he was the great deal-maker. He fingered the Iran deal as the worst deal in history. His defenders will excuse the truckling to Kim as a clever gambit to extract concessions. But Kim has offered absolutely nothing. All of the concessions have come from the United States, including the most crucial one: We've put ourselves on the same moral plane as North Korea. That's what Make America Great Again has achieved.