Is Feminism the Answer to Sexual Harassment?

Mona Charen
|
Posted: Dec 01, 2017 12:01 AM
Share   Tweet
The opinions expressed by columnists are their own and do not necessarily represent the views of Townhall.com. 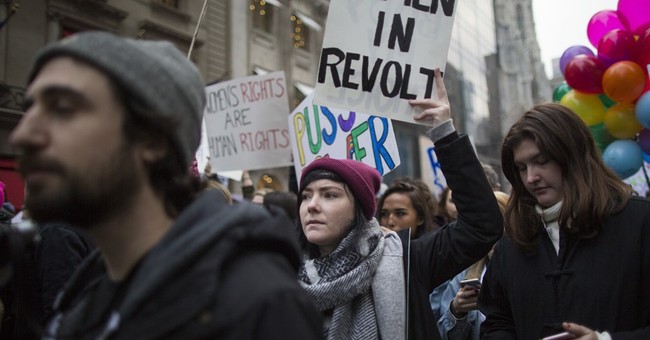 So the friendly morning host with the warm smile was a serial sexual predator? He had a secret lock installed on his office door operated by a button under his desk like a Bond villain? The NPR guy was a Prairie Homewrecker? Next you'll tell us that that nice Bill O'Reilly is a creep. Never mind about that last one, he never even seemed nice.

One popular response to the daily casualty toll of harassers is to suggest that we should all embrace the feminist explanation of male/female relations. That boils down to "believe all women" because women don't lie about these things. It's hard to imagine a flimsier philosophy. As The New York Times' Bari Weiss observed, this fetishizes women as "Truth personified," which cannot withstand a second's scrutiny. Of course women lie about these things. The Duke lacrosse team was falsely accused of rape, as was a University of Virginia fraternity. Remember the Scottsboro Boys? And a woman working for the ironically named Project Veritas attempted to sting The Washington Post by spinning a false tale about Roy Moore (in hopes of discrediting the Post and Moore's truthful accusers).

Women are often victims, but they are not angels. Yes, powerful men abuse their positions to get sex. But any serious reckoning with sexual misbehavior has to take account of the women who use their sexuality to gain advantage, too. Just as everyone knows men who have harassed, they also know women who have slept their way to the top.

There are other reasons that feminism provides no safe harbor for those wishing to find the moral high ground on questions of sexual propriety. Feminists damaged their credibility by rallying around Bill Clinton -- a partisan taint that persists, as we've seen with Nancy Pelosi's late and grudging condemnation of John Conyers. Feminists cannot pose as impartial champions of women if they're only moved by the plight of those victimized by Republicans.

Beyond partisanship, the feminist record is unhelpful. From the inception of "second wave" feminism in the 1960s, the movement embraced sexual "liberation" as part of women's liberation. Feminists weren't so much upset that some men behaved like pigs as they were that women couldn't do the same without loss of reputation. It was the "double standard" they took aim at, not sexual license itself. In fact, much second-wave feminist literature was devoted to boosting the idea of women's supposedly superior orgasmic capacity compared with men. In "Sexual Politics," Kate Millett declared, "All the best scientific evidence today unmistakably tends toward the conclusion that the female possesses, biologically and inherently, a far greater capacity for sexuality than the male."

Like the new left they emerged out of, feminists joined hands with sexual revolutionaries in rejecting all of the old sexual mores -- including marriage. "Destroy the patriarchy," they chanted. They agreed with the Playboy Foundation (a contributor to the NOW Legal Defense and Education Fund) that linking sex with morality at all was an outdated idea.

And so professional feminists actually helped midwife the loose sexual culture we have today. Arguably, this culture has permitted men to behave even more shabbily toward women than the old mores did. This may sound odd, but I think it's true. Even the sexual harassment has become grosser than it was a few decades ago. I know of a few women who faced harassment in the 1970s and 1980s (myself included), but honestly, it was practically as polite as a Victorian drawing room compared with the stories we are hearing now about Louis C.K. or Harvey Weinstein or Mark Halperin. Womanizers used to at least make an effort at seduction. Now they seem to act out repellent narratives from porn movies.

Our 50-year excursion into sexual excess may yet provoke a counter-revolution. Women are clearly finding their voices, and men (at least many men) are recognizing how dishonorable and grubby this behavior is.