Mona Charen
|
Posted: Jul 29, 2016 12:01 AM
Share   Tweet
The opinions expressed by columnists are their own and do not necessarily represent the views of Townhall.com. 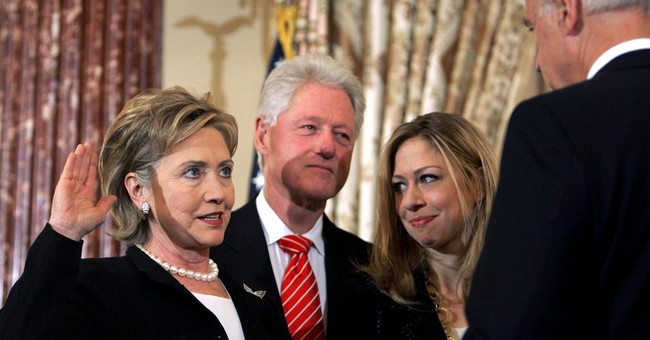 Trending
Where does a true patriot turn in the 2016 presidential election? The Democratic Party's national convention is attempting to lay claim to the patriot mantle. Yet the party is not quite there. Former Defense Secretary Leon Panetta was heckled with chants of "no more war." The Code Pink wing lost the nomination this year, but it won the platform -- and may yet win it all in the next cycle.

President Barack Obama seeded his own speech with patriotic grace notes, and though he recoils from Donald Trump, his horror at Trump's style seemingly blinds him to their similarities. On substance, they are more alike than not. This shouldn't be shocking, considering that Trump has been a Democrat for most of his life. What is stunning is the degree to which so many patriots whose eyes water at the flag and the national anthem imagine that Trump is a patriot in the same mold.

Obama reproached the Republican nominee for wanting to "turn away from the rest of the world." But that's Obama's view, too. He's happier to be a follower than a world leader, never more gratified than when the U.S. is more modest. When asked why he failed to give even rhetorical or moral support to the millions of Iranians in the streets during the abortive Green Movement, his administration explained that the U.S. was tainted by its history and that any expression from us would have backfired.

His refusal to help the suffering people of Syria -- failing even to provide a safe haven for refugees, which has had radiating consequences for Europe's stability and security -- was grounded in the same perspective, that American power is blundering when it is not downright imperialistic. When he did intervene, as in Afghanistan, it was feckless. In Libya, he played second fiddle to European powers, which seems more morally acceptable to progressives.

Trump thunders that "we don't win anymore" (he's referring to trade, which is completely wrong) and bristled (rightly, in this instance) at the humiliation of our sailors at the hands of the Iranians in January. But like Obama on steroids, he takes a dim view of America's moral standing.

When he was questioned about his warm endorsements of Russian President Vladimir Putin and reminded that Putin has killed quite a few critics, Trump shrugged, "Our country does plenty of killing also." That's an extraordinary calumny, implying not the indisputable fact that we have too many violent deaths in America but that, like Russia, our government engages in targeted assassinations of political opponents. Here Trump leaves Obama behind altogether.

Asked about the attempted coup in Turkey, Trump's tropism toward tyrants was manifest. He praised Turkish President Recep Tayyip Erdogan's success in thwarting the coup, and when asked about Erdogan's crackdown on thousands of journalists, educators, judges, civil servants and others, Trump was unmoved. "I think right now when it comes to civil liberties, our country has a lot of problems," he said. He mentioned Ferguson and Baltimore and police being killed, and he offered this: "When the world looks at how bad the United States is and then we go and talk about civil liberties, I don't think we're a very good messenger."

Trump misses the most crucial fact about Turkey: The thwarted coup may have empowered Erdogan to take one of the world's most advanced countries with a Muslim majority, a NATO ally, down the path of Iran. But also consider his view of America. Is that how a patriot thinks? We lack the moral standing to criticize other nations on human rights?

Trump has infamously praised Saddam Hussein ("He killed terrorists" -- no, the opposite), China's communist bosses who mowed down protesters in Tiananmen Square ("They put it down with strength") and even Kim Jong Un, about whom he said: "You got to give him credit. ... He wiped out the uncle. He wiped out this one, that one. I mean, this guy doesn't play games."

But Trump has reserved his greatest affection for Putin. Yes, George W. Bush praised Putin (once), but he wised up. Yes, Obama attempted to "reset" relations (less explicable), but he was forced to backtrack when Putin snatched Crimea, reintroduced Russia's military directly into Syria and made proxy war on Ukraine.

Trump is on notice about all of that and much more. It is common knowledge (which is not to say Trump knows it) that Putin's opponents tend to die by poison and other methods beloved by the KGB; that state-controlled Russian media ceaselessly incite America hatred; that Russian internet trolls seek to destabilize democratic governments in Europe and quite likely here; that Putin sides with Iran, Bashar Assad (Syria's genocidal dictator) and Hezbollah; and that Putin, having strangled civil society and freedom in Russia, seeks to recapture the lost glory of the Soviet empire. Yet Trump bats his eyes at Putin like a schoolgirl with a crush.

Part of Trump's appeal is chauvinism -- a strutting sort of nationalist appeal (unsupported by anything approaching policy ideas). It's more than odd, then, that his followers are unshaken by his willingness to be Putin's poodle.