An Open Letter to Jeb Bush

Mona Charen
|
Posted: Feb 05, 2016 12:01 AM
Share   Tweet
The opinions expressed by columnists are their own and do not necessarily represent the views of Townhall.com. 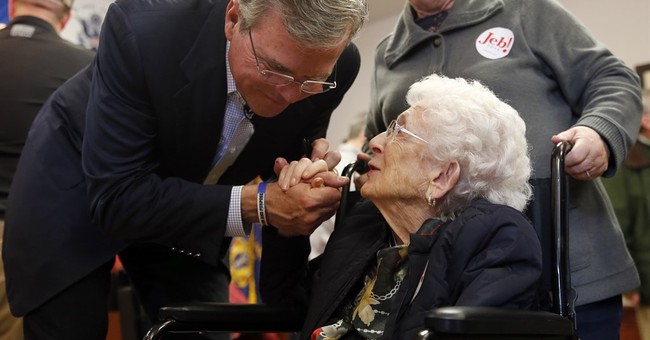 Trending
Dear Gov. Bush: There are many ways to express your love of country. One is to serve as president. In your case, that path seems closed. Since April, you spent the better part of $15 million in Iowa, yet you came sixth, winning just 2.8 percent of the vote and one delegate. At this rate, you'd need to spend $18,540,000,000 to win the nomination -- which is more than even Right to Rise can manage.

There is no shame in losing, of course, and it's always possible that New Hampshire will shock the world by giving you a victory, but let's face it, the RealClearPolitics average of New Hampshire polls has you at under 10 percent (under 5 percent nationally), and your donors are panicking. After what was supposed to be a reassuring post-Iowa conference call with your campaign, one donor told Politico, "Have you ever heard the phrase 'rattle of death?'"

Even stipulating that primary polls are notoriously poor, there are other reasons to conclude that this is not your year. It may not have much to do with you personally. There has never been a third president from the same family. Most Americans were fine with two Adamses, Harrisons, Roosevelts and Bushes. Three is pushing it. I know; I know. You're your own man. Of course that's true. Life isn't fair. But it goes both ways. You would almost certainly never have been governor if your name had been James Ellis instead of James Ellis Bush.

You seem to be a fine person and were certainly a superior and very conservative governor of Florida. For good or ill, gratitude for past service is not the mood this year, and, with all due respect, except at the last debate, when, freed from Donald Trump's bullying, you finally stood up straight, you've been an awfully dull candidate.

We cannot chalk it up to voter ignorance. Between your campaign and your super PAC, you've already spent $89.1 million on positive ads about yourself and negative ads about others.

One of the great traits about the Bush family, as about other great New England Protestant old-money families, is that you value good manners, courtesy and integrity. Those virtues are disparaged in our increasingly vituperative, bombastic and swaggering era. One senses that you find Donald Trump's conduct disgusting and even a little bewildering. Good for you. It is.

And yet, you've directed the overwhelming majority of your negative advertising (and you've led the pack on negative ad spending) not against Trump, who seems to represent everything you find destructive and dangerous in modern politics, but against your old friend and ally Marco Rubio.

Your ads have been embarrassing. You and Rubio agree on nearly everything, so you're dredging up long since debunked stories about credit cards and ridiculous accusations of missed votes in the Senate chamber. Really? Is that all you've got? No, you've also run ads attacking Rubio for taking the same position you took on illegal immigration.

You seem to believe, as many of us do, that in order to prosper, in fact, in order to survive, the Republican Party must look beyond its aging, white, rural and evangelical Christian core to welcome African-Americans, Hispanics, Asians, urbanites and the young. Yet by attacking Rubio, you are attempting to sabotage the very best messenger the Republican Party has found in decades. As you yourself put it: "What Marco has, I think, is something that the Republican Party needs to have: a hopeful, optimistic message based on our principles. He's probably the most articulate conservative on the scene today."

After Iowa, Marco Rubio has an excellent chance of winning the Republican nomination. If he prevailed, he would be the most conservative nominee in decades and well-situated to win the general election. This is not to hurt your feelings, but your general election favorability ratings are the worst in the Republican field with the exception of Trump. Despite the avalanche of negative ads, Rubio's net favorable ratings are the best (with the exception of Ben Carson, and we know where that's going).

If you were to drop out of the race now and endorse Marco Rubio, or, at the very least, call off the attack dogs, you would be advancing everything you say you believe in except yourself. It would be a gracious and inspiring gesture. It would be a different way to serve your country -- and might even revive our faith in Yankee integrity.