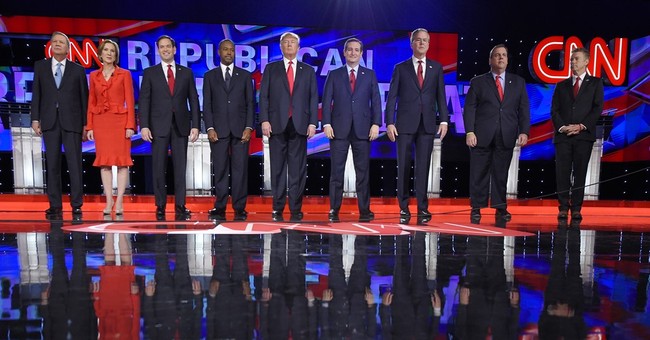 In December 2011, the candidate who led in the Iowa polls was not Rick Santorum (who ultimately squeaked out a victory there), nor Michelle Bachmann (who had driven Gov. Tim Pawlenty from the race by winning the Iowa straw poll earlier in the year), nor Mitt Romney. No, the leader was Ron Paul, with 23 percent.
Public Policy Polling provided this analysis in mid-December:

"Paul's base of support continues to rely on some unusual groups for a Republican contest. Paul is ... cleaning up 35-14 with the 24 percent of voters who identify as either Democrats or independents. Young people and non-Republicans are an unusual coalition to hang your hat on in Iowa, and it will be interesting to see if Paul can actually pull it off."

It's important to remember that the mid-December poll showing Paul in the lead was a mere two weeks before the caucuses, which were held on Jan. 3 that year. This year, the caucuses will be held on Feb. 1.

In national polling in December of 2011, the leader among Republicans was Newt Gingrich, with 37 percent, followed by Mitt Romney, with 22 percent. Everyone else was in single digits. On Feb. 18, 2012, Rick Santorum was on top with 34.3, according to the RealClearPolitics average.

All of this is by way of encouraging a certain amount of skepticism about the polls we're seeing. Recent elections in Kentucky, Great Britain, Argentina and Israel also featured outcomes that were not predicted by pre-election polling.

Does this mean Donald Trump's standing is illusory? No, his lead has remained steady for six months. But to believe that he will be the nominee you must believe that Republican voters from Iowa to Pennsylvania to California to Michigan will choose as their standard bearer someone who has favored single-payer health care, racial preferences, a ban on "assault" weapons, drug legalization, abortion, eminent domain (oh, does he favor eminent domain) and who invited Hillary Clinton to his wedding (one of them). You must convince yourself that Republicans will choose a man who opposes entitlement reform, the wars in Afghanistan and Iraq, free trade and elementary good manners. Above all, Republicans would be choosing someone whose policy proposals are essentially barroom blurts.

While Trump floats above all normal categories of Republican politics, the other candidates are proceeding on the assumption that conservative credentials still matter. The question that came into relief at the Las Vegas debate is: What is conservatism in 2015? For Rubio, it's (at least in part) a commitment to American world leadership. For Cruz, it sometimes seems to be more a mood (an angry one) than a philosophy.

Ted Cruz is angling to be the outsider -- referring contemptuously to the "Washington cartel" and sidling up to Trump at every opportunity -- while also claiming the mantle as the purest conservative. But he has embraced Paulite positions that overlap with liberal ones, such as his vote for the USA Freedom Act that scaled back the capacity of the National Security Agency to do bulk data collection. He lambastes Rubio for teaming up with Charles Schumer on immigration reform (which Cruz also supported at the time, if with reservations), but he teamed up with Schumer himself on the NSA (which Rubio opposed unreservedly).

Sen. Cruz is known for his high intelligence, which is usually an asset. But it has disadvantages, too. When he disparages fellow Republicans as "crazy neocon-invade-every-country-on-Earth and send our kids to die in the Middle East" types, you know he didn't choose his words carelessly. He seems satisfied to reinforce one of the caricatures the left employs about Republicans. Similarly, when he invoked "America first" as his foreign policy during the debate, you wonder what he's up to. If Trump (what nuclear triad?) had said it, it would be fair to assume historical ignorance. Not in Cruz's case.

No political figure is perfectly virtuous or ideologically pure. One difference between Cruz and Rubio is that Rubio has acknowledged his apostasy on the subject of immigration and has changed his position. Cruz, by contrast, has changed positions, but claims perfect conservative rectitude no matter which side he's on. Successful politicians think and act strategically, but when it looks like scheming, or outright dishonesty, it leaves a bad taste.