Taking Our Country Back: From Whom? 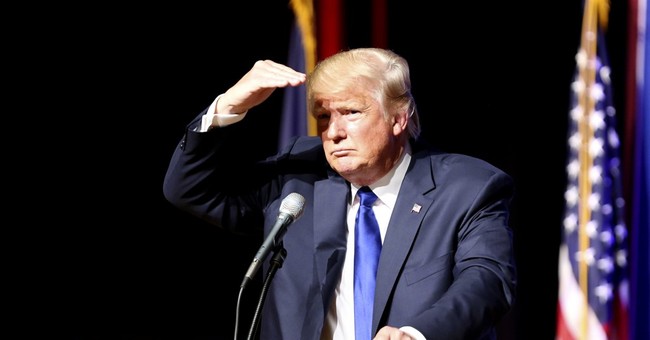 Let's assume, for fun, that Donald Trump's supporters are thinking with their brains, not their viscera. If so, they will want to know that the issue he has lassoed for self-aggrandizement has been utterly demagogued. Trump is playing them for chumps.

A young woman was murdered by an illegal alien in a so-called "sanctuary city." Awful, of course. San Francisco's officials bear some of the blame for Kate Steinle's death by declining to enforce the law.

But Trump has abused the trust of his audiences by suggesting that an illegal immigrant crime spree is the great threat to our nation. Trump admirers yearn to "take our country back." From whom? From Barack Obama, Valerie Jarrett, Al Sharpton, The New York Times, Jon Stewart and Hillary Clinton? Or from Mexican illegals?

The United States is very much in decline, but the role of illegal immigration in that slide is negligible. Our lack of economic growth, our withdrawal from world leadership, the decline of work and the rise of dependency on government, law flouting by those in power, the degradation of our entertainment culture, rent-seeking by entrenched interests, the stultifying politicization of education (especially higher education) -- to say nothing of the nuclearization and enrichment of the world's worst terror state -- those are the great challenges we face.

Obama's flagrantly illegal waiver for illegals living here made everyone who values the rule of law see red. (The judiciary has thus far stayed the amnesty.) And yet, a little perspective is in order.

Illegal immigration is declining. Between 1990 and 2007, the number of illegal immigrants tripled. In 2000, an estimated 1.6 million illegals entered the United States. Since 2012, that number has dropped to about 400,000 (even accounting for the flood of underage migrants last year).

We've built fences along all but the most inaccessible areas along the border. Over the past decade, we've spent $10.7 billion on fences, cameras and other measures, including doubling the number of border patrol agents to 18,000. We've also spent billions on biometric identity management and other things, bringing the total expenditure for border control to $16.2 billion last year. Those truly serious about ending illegal immigration altogether must grapple with national identity cards. Another fence isn't going to do it. Forty percent of illegals are visa overstays.

The population of illegals here is aging, which suggests that fewer young people are making the increasingly treacherous journey across the desert. Meanwhile, the dramatic drop in Mexico's birth rate, from 7.3 children per woman in 1960 to 2.4 today, suggests a problem that is on the way to solving itself. Demographers say that when the birth rate falls below 2, emigration stops. Other Central and South American nations are experiencing similar drops.

As for the epidemic of crime for which illegal aliens are said to be responsible -- it's a myth. Crime rates have declined as immigration has increased. Much has been said about the percentage of federal prisoners who are illegals and/or Hispanic. But federal prisoners represent only about 14 percent of total U.S. inmates, and according the Bureau of Justice Statistics, only 7 percent of federal offenders are incarcerated for violent crimes (most violent crimes are state matters). As the Pew Research Center notes, the past two decades have seen a spike in the number of immigration-related crimes leading to federal prison sentences. These "unlawful reentry" convictions have changed the complexion of federal inmates. Whereas in 1992 Hispanics comprised 23 percent of federal inmates, that share has grown to 48 percent today.

Second- and third-generation Hispanics commit crimes at higher rates than non-Hispanic whites, but at lower rates than African-Americans. As for the foreign-born -- that is, first-generation immigrants -- for the most part, they keep their noses clean. The American Immigration Council records that "among men age 18-39 (who comprise the vast majority of the prison population), the 3.5 percent incarceration rate of the native-born in 2000 was 5 times higher than the 0.7 percent incarceration rate of the foreign-born."

Having stoked rage about illegal immigrants, Trump now urges that after deporting 11 or 12 million people, he will "let the good ones come back," force Mexico to pay for a "wall" and "impound remittances" from "illegal wages." A candidate for student council president of a third-rate high school could devise more serious solutions than those. But then, student council types tend to be in earnest. Trump is simply on the ultimate ego trip.