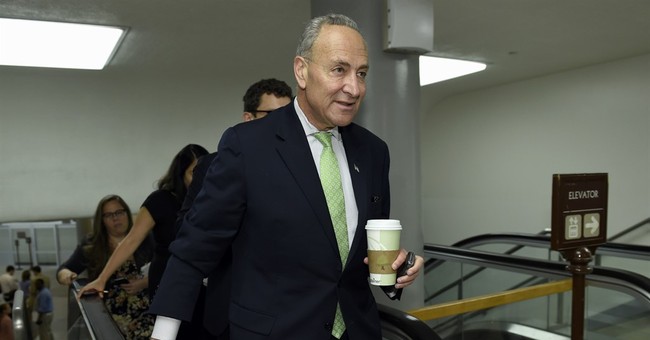 "Seven Jewish Lawmakers Could Tilt the Scales on Iran Deal," headlines The Times of Israel. The members -- Sen. Charles Schumer, Rep. Steven Israel, Rep. Eliot Engel, Rep. Adam Schiff, Rep. Nita Lowey, Sen. Ben Cardin and Rep. Ted Deutch -- are all Democrats. They must choose between loyalty to their party's president and concern about what the deal portends for Israeli and American security.

There are long and short answers to the question: "Why are Jews liberal?" The long answer traces back to the Enlightenment in Europe, when parties of the right were monarchist and anti-Semitic, while parties of the left favored pluralism and religious freedom. I don't buy the long argument. Tsar Alexander III, who instigated pogroms against the Jews, is long dead. So is Napoleon, who liberated them. In the meantime, Jews have suffered under communists, who proved just as cruel as the monarchists.

Jewish liberals often explain that their views spring from Jewish tradition, which admonishes the Jewish people to engage in "tikkun olam" or "healing the world." I'm skeptical. Tikkun olam is traditionally understood as adhering faithfully to the commandments (keeping kosher, visiting the sick and observing the Sabbath, for example), the better to prepare the world for the messianic age. Many of those who brandish the Hebrew phrase today have commandeered it to bolster support for same-sex marriage, government-run health care and the rest of the progressive agenda -- an interpretation that would, to quote the immortal words of Tevye in "Fiddler on the Roof," "cross a rabbi's eyes."

No, the short explanation of Jewish liberalism is straightforward. Jewish Americans tend to be disproportionately urban, secular and educated. Each of those categories is highly correlated with liberalism and membership in the Democratic Party -- God (you should forgive the expression) help us. Speaking of Him, Jewish Americans are less likely than any other religious group in America to say they believe in God. A 2013 Pew poll found that 62 percent of Jews reported that their identity was rooted mainly in culture and ancestry rather than religion. Only 34 percent of Jews said they were certain God exists, compared with 69 percent of the general public (though an additional 38 percent say they believe, but without certainty, placing believers in the majority).

Even without knowing anything else about Jews, the above statistics would predict what we see: that about 70 percent of American Jews lean Democrat, while 22 percent are Republicans.

Still, for those Democrats pondering what the Iran vote will mean for their own political futures, other statistics should pull them up short. Though comparatively irreligious, 70 percent of American Jews remain strongly or somewhat strongly attached to the State of Israel. Though some liberal Jews may, at times, have been persuaded by Obama administration claims that troubles in relations with Israel are traceable to Bibi Netanyahu's prickly personality, that line is less likely to be effective now that all major parties in Israel have united in opposition to the Iran deal/capitulation.

But here's the kicker that Schumer, Cardin and others will want to bear in mind: The American Jewish world is changing very fast. The older, more secular doggedly liberal Jews are dying off, falling away from organized Jewish life and intermarrying (which means their children are no longer Jewish in most cases). Orthodox Jews, by contrast, are thriving, and they have large families -- having 10 or more children is not uncommon. In New York City, the Orthodox accounted for 33 percent of Jews in 2002, but 40 percent only 10 years later. In 2012, 74 percent of Jewish children in New York were growing up in Orthodox homes. The religious/cultural conservatism of these observant Jews affects their political affiliation. Fifty-seven percent of Orthodox Jews are Republicans, and huge majorities are very concerned about Israel.

They might forgive a vote for Obamacare. But a vote to provide billions of dollars to the paymasters of Hezbollah and Hamas; a vote to permit the Iranian regime to acquire missiles, stealth aircraft and more with which to kill Americans and Israelis; a vote that, in essence, accepts the eventual nuclearization of Iran without any corresponding concessions from the mullahs? Do Democrats want to chance it?