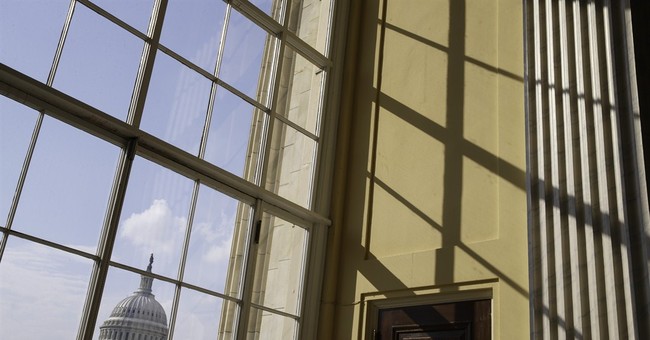 "Meet the Press" featured a segment this week that illustrates the planted liberal axioms that dominate our political culture. The topic was Congress's failure to "get anything done" this term. Political director Chuck Todd set the stage:

"New polling from NBC News, The Wall Street Journal and Marist ... shows that three out of four voters agree that Congress hasn't done much this year ... And guess what? The public's right. Congress hasn't been productive. In fact, this Congress ... is on track to be the least productive in history."

Todd then cued the hoary Harry Truman clip about the "Do Nothing" Congress of 1948 before inviting the panel to discuss the "problem" of congressional inaction.

It's fitting "Meet the Press" chose the Truman quote, because the liberal approach to government has not changed since then. More legislation is viewed as an obvious good, whereas failure to pass laws is something that requires explanation. President Barack Obama expressed the same idea (a shock, I know) when he disdained Congress for failing to "do its job."

That isn't true -- even accepting the government-centric assumptions of the Democrats and the press. Some 195 pieces of legislation have passed the Republican House of Representatives only to be buried in the Democratic Senate. Among those are at least 31 authored by Democrats.

The Senate passed an immigration overhaul in 2013 that has not passed the House. Though the president characterizes this as gross negligence on the part of Republicans, it's just possible that there's a difference of opinion. Other presidents would have sought compromise, or attempted to bite off smaller pieces of their agenda and pass them sequentially. But Obama is impatient with the rule of law and has been threatening to "do things on my own." Thus do we slide, every day of this administration, a little closer to banana republic status?

On the subject of legislation generally, we badly need to rid ourselves of the notion that the nation is in need of more laws. We are straightjacketed with laws as it is. In fact, the best use of Congress's time would be to review laws that are ineffective, wasteful, duplicative or outmoded and repeal them. (We'd need to distribute smelling salts to the press first, of course.)

Actually, the Republican House did attempt as much last week with the immigration bill. The reform that passed would have overturned the 2008 law that had the unintended consequence of encouraging unaccompanied minors from Central America to attempt entry across the southern border. (Those fleeing persecution would still be eligible for asylum.)

Humans are fallible, and it should be taken as read that laws will require revision and often outright repeal.

Our laws, and particularly our criminal statutes, have metastasized to the point that civil liberties lawyer Harvey Silverglate estimates the average American could be unwittingly committing "three felonies a day." His book of that title cites examples such as the parent charged with "obstruction of justice" for destroying drugs he found in his son's bedroom and a snowmobiler lost in a blizzard who was charged with violating the Federal Wilderness Act.

Congress can contribute to public welfare just by keeping tabs on federal officials who themselves violate the law -- like IRS officials who revealed confidential taxpayer information to outsiders and harassed citizens based on their political or religious views, and Veterans Affairs officials who falsify records to cover up poor care. Or it can investigate the scandalous expansion of SWAT teams by government agencies, including NASA and the Department of the Interior. (See Radley Balko's book.)

The truth is that government at all levels has been promiscuously legislating at a furious pace for decades. Laws are almost never repealed but simply layered over one another like sedimentary rock -- with about as much flexibility.

Steven Teles, in an essay for National Affairs, calls this process "kludgeocracy," and while the word is funny, the results are not. Just complying with the dizzying complexity of the IRS code costs Americans an estimated $163 billion every year, along with 6.1 billion man-hours. Even more damaging is the opportunity all this kludge offers for corruption. The more complicated, and therefore opaque, a legal regime is, the easier it is for special interests to manipulate, and our system is putrid with rent seeking.

With rare exceptions, we need fewer, not more, laws. Lift your glass to gridlock -- while it remains legal.