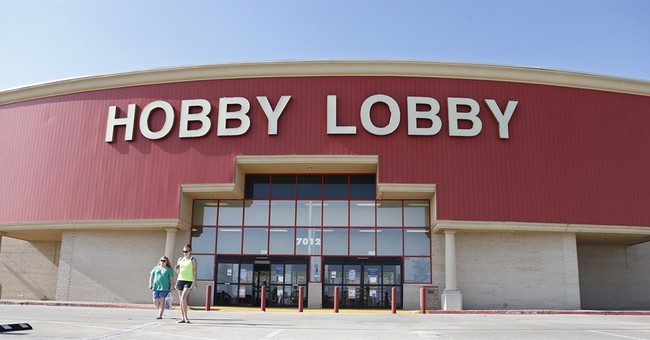 The major media's account of the Supreme Court's decision in the Hobby Lobby case was typical of the way the case has been misreported from the start. The New York Times headline read, "Supreme Court Rejects Contraceptives Mandate for Some Corporations." Politico led with "SCOTUS sides with Hobby Lobby on birth control." Others were similar.

That's not what the case was about, and you'd think that major news organizations might at least get the basic facts straight. The litigants -- the Green and Hahn families, owners of Hobby Lobby and Conestoga Wood Specialties respectively -- did not have religious objections to contraception. They might have if they were Catholic, but they weren't, and they didn't.

The Hahns are Mennonites and the Greens Christians of no particular denomination. Both families provided coverage for contraceptives in their health plans. Hobby Lobby provided coverage for 18 different methods of birth control. What both the Greens and the Hahns objected to were the regulations promulgated by the Department of Health and Human Services that would have required them, on pain of severe fines, to cover four more methods, including the morning after pill, that the litigants (and not just they) consider abortifacients.

No matter how many times the press calls this a case about contraception, the truth is that it was about abortion. Neither family could, in conscience, be a party to paying for abortion.

The HHS regulations exempted some corporations from the regulations, including churches, some nonprofits and the "exclusively religious activities of any religious order." Religion, the government essentially argued, was something that people do on Sunday mornings or in specifically religious organizations like Catholic Charities. But a for-profit corporation, the government argued, could not possibly "exercise religion."

Yet, as Justice Samuel Alito argued for the majority, people do not lose their free exercise rights when they form for-profit organizations. "A corporation is simply a form of organization used by human beings to achieve desired ends." And just because a corporation is organized to earn a profit doesn't mean that it cannot perform religious or other laudable, nonprofit maximizing goals. Corporations may "take costly pollution-control and energy conservation measures that go beyond what the law requires. A for-profit corporation that operates facilities in other countries may exceed the requirements of local law regarding working conditions and benefits."

There were good constitutional arguments for ruling that the HHS mandate violates the free exercise clause of the First Amendment. The Constitution itself showed deference to the religious objections of Quakers and Mennonites at the time of adoption to swearing oaths. The Constitution accordingly requires that officeholders "swear or affirm" their oath of office.

But the Supreme Court did not reach constitutional questions, because perfectly clear statutes, the Religious Freedom Restoration Act of 1993 and the Religious Land Use and Institutionalized Persons Act of 2000, required the government to give the broadest possible scope to the free exercise of religion.

That the Greens' and Hahns' free exercise was burdened was not in doubt. Hobby Lobby, for example, would have incurred fines of up to $475 million per year.

The government asserted that its mandates served important, if vague, public purposes, such as "public health" and "gender equality." The government did not come close to proving that the mandate was the "least restrictive" alternative available.

At the heart of the government's case was an attempt to steamroll our varied and, yes, diverse nation into conformity on subjects that remain deeply divisive and keenly felt. Like the Affordable Care Act itself, which was railroaded through on a slender majority, the HHS regulations attempted to crush opposition even among the devout. Can you, in the name of "public health" or "gender equality," strong-arm those with religious objections into acquiescing on abortion? RFRA threw a cloak of protection over religious expression in all its forms, and the Supreme Court, by one vote, upheld religious freedom.