Temptation of Wishful Thinking on Iran 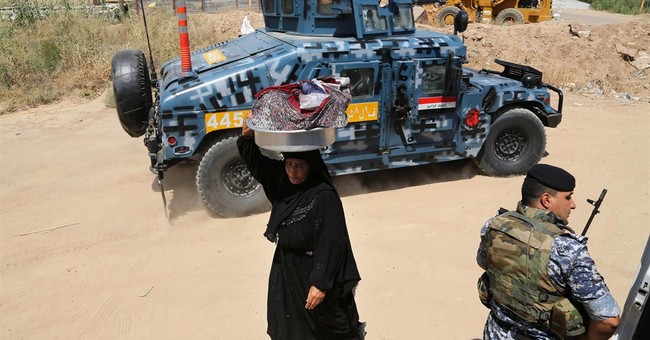 Trending
PARIS -- An estimated 50,000 Iranian exiles and supporters from Europe and North America are here to remind the world that no cooperation with the brutal, expansionist regime in Tehran can possibly advance Western interests.


This annual gathering of MeK (People's Mujahedin of Iran), an Iranian resistance group, was already scheduled. But it might have been called just to rebut Secretary of State John Kerry's comments about possible cooperation between the U.S. and Iran in Iraq. "I think we need to go step by step," Kerry mused, "and see what, in fact, might be a reality, but I wouldn't rule out anything that would be constructive to providing real stability, a respect for the constitution, a respect for the election process, and a respect for the ability of the Iraqi people to form a government that represents all of the interests of Iraq, not one sectarian group over another. It has to be inclusive, and that has been one of the great problems of the last few years."

The administration has walked back a bit from that flabbergasting comment, but the confusion it reflects is typical.

Does the Obama administration understand what it's dealing with in Iran?

Who can object to talks, right? Dialogue promotes peace, doesn't it? Only if your partner has a semblance of integrity. Dialogue with brutal, vicious revolutionaries, who lie as a matter of policy, signals only an eagerness to deceive oneself, which is what is arguably happening now in Geneva, Switzerland.

The mullahs are practiced in deception. While Obama was ignoring Iraq, Tehran encouraged Nouri al-Maliki to oppress all opposition. The Sunnis, who had made common cause with the U.S. against al-Qaida, were forced out of government, arrested and sometimes murdered -- all while Washington issued bland endorsements of Maliki's inclusive reign.

Among Maliki's non-Sunni targets is a group of 3,000 Iranian ex-patriots, members of MeK, currently housed in a facility called (the irony was unintentional) Camp Liberty. MeK is the best-organized and largest domestic opposition to Iran's regime. Maliki's units have repeatedly entered the camp, and they have assassinated 52 people after handcuffing them. The fate of the remainder remains very much in doubt.

The whole world's got trouble. Why should this group compel particular concern? Because, as a letter to Obama signed by 30 prominent Americans details, these opponents of Iran's regime voluntarily disarmed and cooperated with U.S. forces starting in 2003. " ... The MeK worked hard to help protect the lives of our service members ... providing invaluable information about not only Iran's concealed nuclear enrichment activities, but also threats inside Iraq." Each MeK member was vetted by U.S. Forces and promised security.

The letter continues: "Over the last three years, while your administration was committed to keeping the residents secure ... a total of 135 have been murdered or died while being denied access to medical treatment ... In the pocket of each deceased resident was a Protected Person Status identity card."

The hand of the mullahs can be seen in a worldwide disinformation campaign to discredit the MeK. Though they stand for women's rights (one of the leaders is a woman), democracy, religious pluralism, free markets, freedom of expression, abolition of the death penalty, and separation of church and state, they have been tarred as "terrorists" and a cult.

In a carefully researched analysis of these old smears (the U.S. State Department listed MeK as a terrorist group until 2012), Lincoln Bloomfield writes, "A large part of what credentialed authorities in the U.S. have been saying about the MeK's past ... is either demonstrably untrue, factually unsupportable or misleading to the point of intellectual dishonesty." Human Rights Watch, Bloomfield argues, issued a report on MeK that relied on several sources who were secretly in the pay of Iran's Ministry of Intelligence and Security. HRW's conclusions were, in turn, relied upon by the RAND Corporation and State Department.

It's one deception among thousands -- starting with 20 years of denials that Iran is working on nuclear weapons. Let's ask again, as tens of thousands of Iranian exiles gather in Paris to plea for regime change: Does the Obama administration know what they're dealing with?