The Price We, and the World, Will Pay for Obama's Re-election 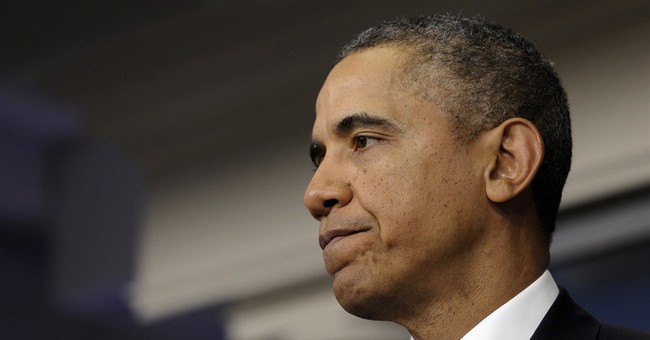 Most Americans who are dissatisfied with President Barack Obama's leadership are thinking about the poor economy and the misbegotten health care law. That disillusionment is justified -- if not tardy. But the foreign policy failures of this administration are likely to be far more consequential, lasting and possibly catastrophic.

What we are seeing is the collapse of American influence in the world.

Permitting people like Obama, Hillary Clinton, Chuck Hagel and John Kerry to deal with the brutal realities of world politics is like putting Richard Simmons into the ring with Muhammad Ali.

On Sunday, reflecting an innocence that really ought to be prosecutable, Kerry announced that the U.S. would impose sanctions on Russia if it annexes Crimea and continues to threaten the rest of Ukraine. But, he hastened to add: "We hope President Putin will recognize that none of what we're saying is meant as a threat, it's not meant in a personal way ... "

Frankly, credible threats might restrain Vladimir Putin, but it's way too late for that. By threatening Syria on the use of chemical weapons and then collapsing like a cheap tent when Bashar Assad called Obama's bluff, the president turned himself into a paper tiger. Kerry's blatant groveling to Putin -- his obvious fear of offending the little Moscow thug -- is a new standard of cravenness.

In a hundred ways, this administration has been telegraphing, not just to Putin but to every would-be aggressor and opportunist in the world, that the United States is not to be feared, respected or considered. Because human nature has not changed in 10,000 years, the world's bad actors are throwing elbows. From China's aggressive moves in the South China Sea and increasing military budget, to Syria's dismissal of U.S. threats and stepped-up murder of tens of thousands, to al-Qaida's resurgence in Maghreb, Iraq, and Afghanistan, to Russia's insouciant acquisition of Crimea and perhaps more, the world is becoming more dangerous. Most ominously, the administration continues to indulge the greatest sham of our time -- the fiction that we are engaged in negotiations to prevent Iran from obtaining nuclear weapons.

Nor were matters better in hand when Clinton was in charge at State. She shared Obama's belief that American influence is malign. When hundreds of thousands of Iranians attempted to unseat the illegitimate regime in Tehran, Obama refused to offer even rhetorical support. Instead, he said, "I've made it clear that the United States respects the sovereignty of the Islamic Republic of Iran, and is not interfering with Iran's affairs." Clinton later explained that this was not an oversight but arose from the conviction that the U.S. would taint the Iranian Green Movement if it expressed support. "We kept being cautioned that we would put people's lives in danger; we would discredit the movement."

Yet when similar-sized crowds assembled to unseat an American ally, Hosni Mubarak, Obama and Clinton didn't show the same hesitation to support the protesters. The Obama administration tacitly supported the mullahs in Iran when they were in danger and explicitly opposed Mubarak when he was.

Obama's apologists remind us that Putin made aggressive moves against two provinces in Georgia while George W. Bush was president. That's true, but Obama made his conciliatory gestures toward Putin -- the infamous reset -- (SET ITAL) after (END ITAL) that. It's as if nothing that happened before Obama's election mattered. Like the French revolutionaries, his ascent to power was Year One.

This administration is drastically cutting the defense budget and gorging on negotiations -- with Iran, with Syria (with Russia as handmaiden), between Israel and the Palestinians, with Russia and with North Korea. What have they to show for it? Syria's mass-murdering leader is safer than ever and has failed to turn over more than a small fraction of his chemical weapons. He has missed the deadlines we imposed; with the result that Jay Carney has expressed severe disappointment. After years of meetings, the Palestinians have refused even to recognize Israel as a legitimate Jewish state. Kerry's response has been to tell Israel to stop asking for that. Sergey Lavrov dismissed Kerry's pleas to withdraw from Crimea. Kerry warned of "very serious consequences." No record of whether Lavrov smiled.

Nothing seems to penetrate Obama's ideological lead helmet. Israel captures a huge cache of Iranian weapons headed for Gaza, and the administration denies that this undermines the notion that Iran is negotiating in good faith. "It's entirely appropriate to continue to pursue the possibility of reaching a resolution on the nuclear program," the spokesman insists.

There is one Obama accomplishment that cannot be denied -- supplanting Jimmy Carter as the worst foreign policy leader of our time.

Why Pelosi Just Pulled FISA Bill From the House Floor
Cortney O'Brien
Gov. Whitmer Asks President Trump for Title 32 Extension to Use National Guard
Reagan McCarthy
Data: 42 Percent of US Coronavirus Deaths Are Linked to Nursing Homes, Where Less Than One Percent of Americans Live
Guy Benson
State AGs: Courts Have Been on Our Side on Religious Liberty Protections