What Happened to the Monica Standard? 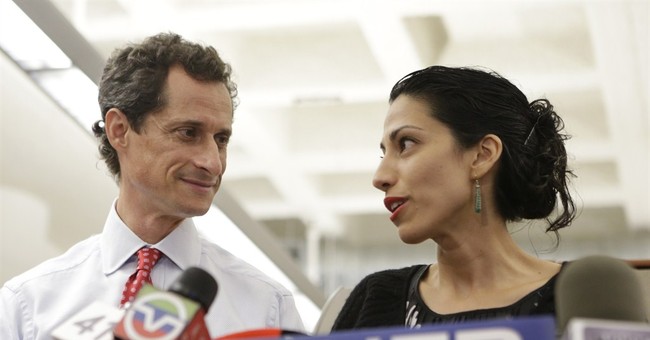 Is anyone else confused about the new standard of sexual propriety in the post Clinton impeachment world? So much of what seemed to have been settled has been thrown into disarray this week.

Following revelations that "Carlos Danger" was continuing his sexting frolics long after resigning in disgrace in 2011, the New York Times editorial board was disgusted.

The timing here matters, as it would for any politician who violates the public's trust and then asks to have it back. Things are different now, he insists. "This behavior is behind me," he said again on Tuesday. He suggested that people should have known that his sexting was an unresolved problem well into 2012.

That's ridiculous and speaks to a familiar but repellent pattern of misleading and evasion.

MSNBC host Rachel Maddow was equally censorious, noting that Weiner had lied to the public and to her personally when he claimed to be rehabilitated following his resignation. "That's the problem," Maddow explained of the lying.

Oh, so "evasion" and "lying" are now repellent? Are they always, or only after a politician who has "violated the public's trust" and then "asks for it back again"? Are the Times, Maddow and others having a sudden attack of prudishness? Didn't we all learn in 1998 that lying about sex is no big deal -- that, in fact, everyone does it? What was Anthony Weiner lying about again? Why is everyone making such a fuss?

Weiner, who married Huma Abedin with none other than William J. Clinton officiating, can't be forgiven for much in my book, but if he's puzzled about the reigning morality on the intersection of sex, lying and politics, his confusion is understandable. Like Clinton, he is without shame. Like Clinton, he has an enabler/co-conspirator as a wife. But if it's "only sex" and "everyone lies about sex," then heck, Weiner probably reasoned that unlike his mentor, he didn't even touch the women he texted.

His brisk press conference reflected perfect Clintonian morality. He began by signaling that no true contrition would be forthcoming: "I'm Anthony Weiner, Democratic candidate for mayor of New York." He then attempted to dismiss the story as old news. He was surprised more hadn't come out sooner, he reminded the press. Hadn't he said that it might? What he called "the behavior" was "problematic to say the least, destructive to say the most."

No, not by a long shot. To say the most would require a more extensive vocabulary -- "contemptible," "debased," "mortifying" or the New York Times' word, "repellent."

To complete the Clinton model, Weiner had Ms. Abedin, schooled by Hillary Clinton (the original Tammy Wynette of modern American politics -- her denials notwithstanding), come to the microphone to throw the mantle of her forgiveness not just over her husband but over his candidacy for mayor. "I do very strongly believe that this is between us and our marriage," she said.

It's not for outsiders to tell anyone how to handle issues in their marriage, but neither does an ambitious wife get to dictate to voters what they can and cannot consider when it comes to matters of character -- or, in the case of Weiner, basic decency. It's hard to think how low you'd have to set the bar if Anthony Weiner could clear it.

The Weiner press conference did establish a new high for staggering narcissism, shamelessness, mendacity and borderline psychopathology. There was one moment when Weiner seemed to approach something resembling ordinary human remorse.

"I'm glad these things are behind us," he said. "I know that this is a very public thing that we had happen to us (note the passive voice -- as if the sexting just fell out of the sky), but by no means does it change the fundamentals of my feelings here."

At last, the viewer thought, he's about to recognize that the most important things in his life are his wife and his son. "And that is that I want to bring my vision to the people of New York."

Everyone seems agreed that Anthony Weiner is a worm. What still goes unrecognized is that the worm in this apple fell from the Clinton tree.