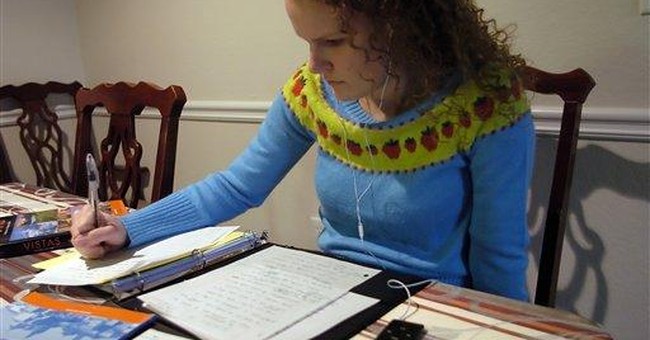 After several cries of pain from my 16-year-old son, I finally got around to reading his Advanced Placement world history textbook. Not a way to spend a placid weekend.

Paging through "World Civilizations: The Global Experience" by Peter N. Stearns et al. is flabbergasting. The authors lean so far backward to be neutral about various cultures and nations that the text fails utterly as reliable history.

In the wake of the fall of the Berlin Wall and the collapse of the Soviet Union -- with all of the copious records that have been exhumed from the Soviet archives and other sources -- one might have thought that the sheer human catastrophe caused by communism ought no longer to be in question among serious people, far less eminent historians. (Actually, there has been no doubt since the 1930s, but the evidence has become even more voluminous since 1989.) Yet throughout this 900-plus-page tome, the brutal body count of communism's victims is given only glancing notice. Like Soviet apologists during the Cold War era, the authors provide generous interpretations of communist dictators motives, along with dry, forgettable descriptions of their atrocities.

"World Civilizations" tells some of our most advanced 10th graders that Josef Stalin's collectivization of agriculture "had serious flaws." That's one way of describing a deliberate policy of starving the peasantry into submission. In "Harvest of Sorrow," Robert Conquest estimated that the "terror famine" of 1932-33 caused the deaths of at least five million Ukrainians, and Stalin's agriculture collectivization, which included the war on "kulaks," (slightly more prosperous peasants) took the lives of 14.5 million people in all.

You won't find those deaths mentioned in "World Civilizations." No, the text instructs students that "after the messy transition period" had ended, "the collective farms did ... allow normally adequate if minimal food supplies ... and they did free excess workers to be channeled into the ranks of urban labor."

Later, "World Civilizations" mentions that Stalin's totalitarian regime resulted in one of the "great bloodbaths of the 20th century." But the very next sentence misleads the reader completely. "During the great purge of party leaders that culminated in 1937-38, hundreds of people were intimidated into confessing imaginary crimes against the state and most of them were put to death. Many thousands more were sent to Siberian labor camps."

Hundreds? Thousands? The Black Book of Communism, published in 1999, estimated that the USSR was responsible for 20 million deaths (this is exclusive of the losses in World War II). More recent estimates have put the total far higher. By mentioning the bloodbath but then immediately citing examples involving only hundreds killed and thousands imprisoned, the text distorts the historical record almost beyond recognition.

Mao Zedong, perhaps the greatest butcher of the 20th century in terms of sheer numbers, is treated as a tarnished idealist -- one who "clung to his faith in the peasants ... as the repository of basic virtue." Mao's Communists, reads the text, were aided in their rise to power by World War II. But they "won the mandate to govern China because they offered solutions to China's fundamental social and economic problems."

The Communists seized power in China though violence and terror -- just the same way communists achieved power everywhere else in the world. Was there an election in which the Chinese endorsed the Communists' "solutions" to China's problems? Of course not. As for Mao's faith in the peasants -- God protect us from such faith. Mao presided over the worst famine in recorded history -- estimates of the number killed range between 20 and 43 million. The famine grew directly out of Mao's Great Leap Forward -- a series of dictates that included farm collectivization and applying the crackpot genetic theories of Stalin's favorite "scientist" Trofim Lysenko. Mao, like Stalin, also used famine as a political tool to eliminate his adversaries.

"World Civilizations" baldly endorses the notion that communist central planning was successful in modernizing the economies of the USSR and China. As Martin Malia wrote in "The Soviet Tragedy," Stalin's Five Year Plan was "the culmination of the most precipitous peacetime decline in living standards known in recorded history."

There is much more along these lines. The Hitler/Stalin Pact was the fault of Britain and France. Castro was an impatient reformer. It's quite staggering that this long-since discredited benevolence about communism is being offered in the 21st century. Our kids would be far better served learning from Wikipedia.