Don't Be Cowed By The New York Times 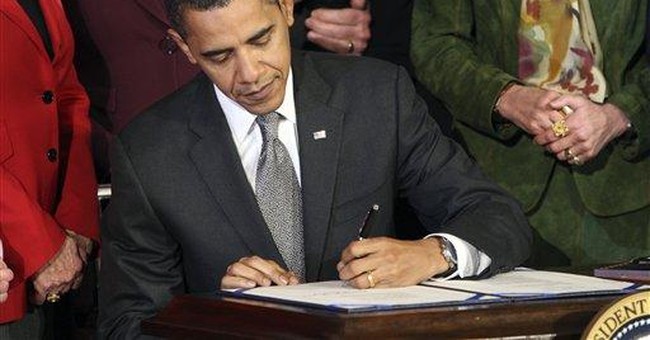 "Romney Camp Stumbles on Pay Equity Question" crowed The New York Times last week. "The Caucus" blog was referring to a conference call in which Romney top aides "seemed uncertain" about how to respond to a question about whether the former governor supported the Lilly Ledbetter Fair Pay Act.

The aide's reply, "We'll get back to you on that," marked a "fumble" the Times ruled, that is "not likely to help (Romney's) case" in attracting women voters. Please.

Notice that support for the Lilly Ledbetter Fair Pay Act, the first legislation President Obama signed in 2009, is now equated with support for women's equal pay. Thus do liberals constantly ratchet the country in a leftward direction, declaring every piece of legislation sacrosanct and daring conservatives to contradict them.

Romney should accept the invitation. The Lilly Ledbetter Fair Pay Act is a terrible law that arguably diminishes opportunities for women.

Lilly Ledbetter was an employee of Goodyear Tire and Rubber Co. who waited more than five years after discovering a pay disparity with her male co-workers to file a claim under the Civil Rights Act. The law had a 300-day time limit (180 days in some states) for filing claims. The Supreme Court ruled that Ledbetter had waited too long. The act that bears her name resets the 180 day time limit with each new pay check so that employees claiming discrimination can wait years or even decades to file claims.

In Ledbetter's case, the executive accused of discrimination had died by the time her case was brought. This Obama-era law is an invitation to litigation and requires extensive and onerous record keeping by employers to guard against lawsuits. As Stuart Taylor reported in the National Journal, a federal magistrate judge had found that Ledbetter received consistently poor evaluations. It's possible that this, and not sex discrimination, accounted for her lower pay. But in any case, when years have passed, memories have faded, and principals have died, it becomes nearly impossible to ferret out the truth -- which is why most laws have time limits in the first place. The Lilly Ledbetter Fair Pay Act isn't really for women at all but for another key Democratic constituency -- trial lawyers.

In practice, the law may actually damage women's opportunities as employers weigh whether to hire a woman or a man and consider the costs of a possible lawsuit by a disgruntled female hire.

Thanks largely to the Democratic Party, we've created a skein of laws and regulations to ensure equal pay for women. But just as with federal programs that provide food to the poor in an era of obesity, the feds are addressing a nonexistent problem. The feminist establishment endlessly hawks its "77 cents" figure, the phony statistic purporting to show that women are paid only about three-fourths of what men earn. But those global comparisons fail to account for key distinctions such as the competitiveness of the industries, work experience, and crucially, hours worked per week. Women consistently work fewer hours than men (for excellent reasons such as caring for children). If you control for marriage and children, as former Congressional Budget Office Director June O'Neill has demonstrated, the pay gap between men and women disappears. Even among some women with children, incomes are continuing to rise. Slate magazine recently wondered what to make of the new phenomenon of marriages in which wives earn more than their husbands (22 percent among those aged 30-44 and rising).

Here's the secret reason that mothers earn less than fathers -- because they want to. Gasp! It isn't the patriarchy scheming to pay women less than they are worth. It's because women value time more than money. A 2007 Pew Survey found that 60 percent of mothers with minor children said that part-time work was their ideal. Another 19 percent preferred not to work outside the home at all. That's nearly 8 in 10 women who would prefer not to work full time while their kids are growing up.

So the Romney campaign shouldn't let The New York Times and the feminist establishment bully them into expressing support for the witless Ledbetter law. That's their agenda, not women's.