Environmentalists: Hands Off My Dishes! 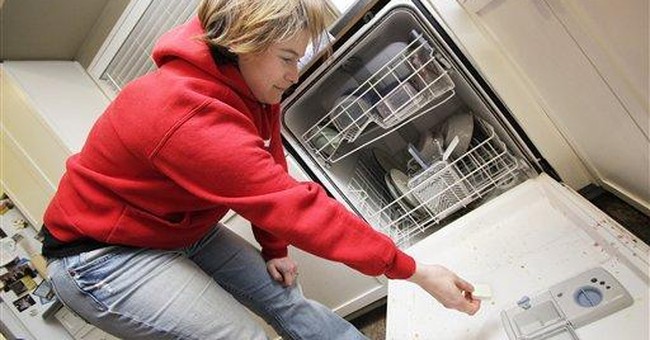 I began noticing the white coating, dull film, and simply unclean dishes a few weeks ago. Naturally, I suspected that other members of my clan were failing to place dishes on the racks of the dishwasher properly. "If the water can't reach it, it won't get clean," I lectured (not, ahem, for the first time), ostentatiously removing a small bowl that had been slipped under a larger one, no doubt by a person who clings to the discredited idea that dishwashers should be loaded to the gills. And those little separators in the utensil caddy -- they are there for a reason, gentlemen!

But the crisis persisted. And, as the days passed, it became clear that the matter was beyond poor placement. Bits of spaghetti, stiff and stubborn, stuck like stalactites to bowls. The walls and doors of the machine emerged waxy and coated from each wash, in contrast to the gleaming surfaces of the past. Between the tines of forks, ugly bits of hardened remains resembled something you'd see on "NCIS" -- if not quite repellent, then certainly unwelcome from what should have been a disinfected, pristine dishwasher!

I switched brands of dishwashing liquid. No change. Topped off the rinse aid reservoir. No change. I'd be lying if I didn't admit that the thought of buying a new machine flitted through my consciousness. Sparkling, squeaky-clean dishes are a necessary part of our quality of life! But our dishwasher is only three years old.

And then I learned that I don't have a personal problem. I have a political problem. Jonathan V. Last of The Weekly Standard explains that, all across the nation, innocent Americans are grappling with the identical scourge. Our dishwashers are fine. The reason our dishes are dirty is that the environmentalists have succeeded in banning phosphates from dishwashing soap.

Until recently, dishwashing soap contained about 8 percent elemental phosphorus. That's the magic element that "strips food and grease off dirty dishes and breaks down calcium-based stains." It also prevents food from reattaching to the dishes.

Or used to. As of July 2010, the nation's detergent manufacturers, bowing to laws regulating phosphorus in 17 states, reconfigured the formula for all dishwashing soap to contain less than 0.5 percent phosphorus. It's taken till now for most of us to notice, as we used up the old (the wonderful old) soap and unwittingly made the switch.

Environmentalists argue that phosphorus winds up in our lakes and streams, causing algae blooms, which in turn reduce the oxygen available for other life. They admit that the amount of phosphorus coming from dishwasher soap is small, but, according to Jani Gilbert, a spokeswoman for the Department of Ecology in Washington State, "Anything we can do is good."

Well, hang on. According to a 2003 Minnesota study, only 1.9 percent of the phosphorus in that state came from dishwashing detergent. And even The New York Times acknowledges that fertilizer and manure are the big culprits, with dishwashing soap contributing only "a fraction" of phosphates in the water.

Besides, removing phosphorus has other environmental consequences. People may run their dishwashers twice (guilty), causing more greenhouse gases to be created, or they may hand-wash their dishes using more hot water than machines do (there are studies that show that hand-washers tend to run the hot water too long -- really).

This stealth attack on our dishes happened with little public debate. If there really is a serious problem with phosphates in our rivers and streams (and from my quick inquiries, it seems to vary considerably around the nation), then voters should be offered alternatives. We can reduce our use of lawn fertilizers, for example. I'd prefer a yellow lawn to grimy dishes if it came to that.

But I need to be convinced. Remember those compact fluorescent light bulbs that were supposed to save billions of kilowatts of energy? California was an early adopter and is spending $548 million over seven years to subsidize the sale of the bulbs (the rest of us will see incandescent bulbs disappear from shelves by 2014). But now it seems the CFL bulbs don't last 9.4 years -- more like 6.3. They don't work well when they're cold. They're very expensive. They cast a garish light. And if they break, you have to don a Hazmat suit to dispose of them. Meanwhile, LED lights are coming on fast, making the whole CFL thing seem as fresh as pet rocks.

In other words, environmentalists may not know what they're talking about. In any case, something as intimate and critical as the cleanliness of our dishes ought not to be decided through stealth or back-room deals. Arise! A cascade of complaints -- to the companies and to governments -- is our best hope.