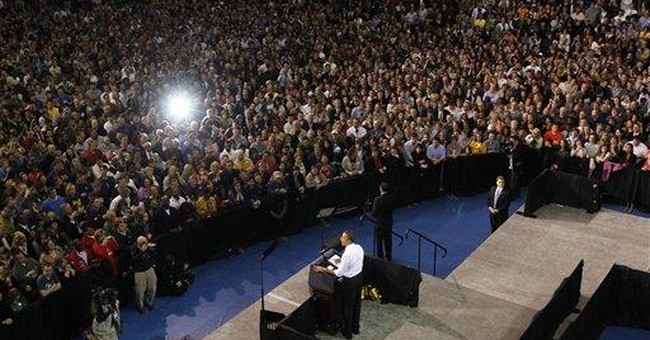 Throughout the past year of debate on health care reform, the conservative fear and the liberal hope were identical -- that passage of a huge new entitlement program would prove irreversible. "No one now dares touch Social Security or Medicare" crow the Democrats, and it will be the same with Obamacare. Once the hammock has been strung, they reason, a lazy and comfortable electorate will bestir itself only to defend its place at the trough (forgive a mixed metaphor). At election time, a "kept" electorate will obediently choose the party of entitlements.

Conservatives have imagined the same result, though with bitter apprehension rather than fond anticipation. Further haunting conservative imaginations have been two concomitant fears: 1) that a nation with nationalized health care will become resistant to all arguments for smaller government and 2) that health entitlements will so raid the Treasury that a global military posture will become unsustainable.

As has been noted in this space before, the fate of Catastrophic Health Insurance in the late 1980s proves that entitlements do not always achieve immortality. Sixteen months after passage, the bill was repealed. Furious senior citizens were outraged at the premiums, which ranged from $58 per year for those earning $25,000 or less, to $800 per year for those in the highest income brackets.

Cynics might say that the fate of the Catastrophic law only reinforces the case that people like giveaways. Ask them to chip in for a benefit like long-term care and they'll rock the car of Ways and Means Committee Chairman Dan Rostenkowski, forcing him to run for cover literally and figuratively. Maybe. But another way to look at it is that many older people had already taken the step of purchasing private long-term care insurance and were now being hit twice. Nor were the costs of the program clearly spelled out at the time of passage, leaving the nasty surprise for later.

Obamacare's costs, too, have been misrepresented by the Democrats. Only by stripping the $208 billion "doc fix" from the legislation could they claim that the bill would not increase the deficit. But the doc fix will happen, and health spending, even taking the rest of the bill's ridiculously rosy assumptions as true, would exceed $1.1 trillion. By the Cato Institute's reckoning, the actual 10-year cost will exceed $3 trillion.

Some of these costs will be borne immediately. Couples who earn more than $250,000 will pay an additional Medicare tax and a 3.8 tax on investment income; patrons of tanning salons will pay a 10 percent sales tax; makers of medical devices like defibrillators and insulin pumps will pay a 2.3 percent new tax; and large employers like Caterpillar and John Deere will have to pay taxes on federal subsidies they receive to provide retiree benefits.

As the Wall Street Journal reported, medical device manufacturer Medtronic has announced that it may have to fire 1,000 employees, Caterpillar estimates that the new law will cost it up to $100 million, and Verizon has warned employees to expect unwelcome changes in health coverage.

The health bill was passed (barely) despite popular opposition but cannot succeed without eventual public approval. The initial returns are not encouraging for the dependency crowd.

And then there is this cautionary note: Even in a country that embraced socialism with open arms, disillusion eventually set in. Post-war Great Britain chose by majority vote to socialize medicine, and Labour governments followed up by swallowing the "commanding heights" of the economy -- transportation, mining, communications, and more. Yet by 1979, the nation was sufficiently beaten down that it turned to a full-throated capitalist for salvation.

When Margaret Thatcher took office in 1979, Britain was sclerotic and ailing. Sir William Armstrong, head of the civil service, saw his duty as the "orderly management of decline." Repeatedly victim to debilitating strikes by dockworkers, miners, and others, the British economy sank to such depths that the nation had to turn to the International Monetary Fund for relief.

With verve, conviction, and indomitability, Mrs. Thatcher set about privatizing government-owned industries, selling public housing to its tenants, cutting taxes (the highest marginal rate had been 98 percent), and reviving Britain's international role. It's not too much to say that she transformed Britain, dramatically improving living standards, productivity, and social mobility. She did for Great Britain what Rudy Giuliani did for New York City.

As the Iron Lady said, "Decline is not inevitable." Not with the right leadership.