The Democrats Won't Talk About This Provision 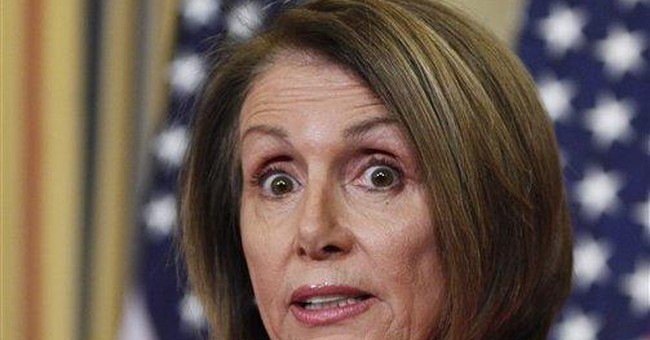 "You've heard about the controversies within the bill, the process about the bill, one or the other. But I don't know if you have heard that it is legislation for the future . ... We have to pass the bill so that you can find out what is in it, away from the fog of controversy." -- Speaker of the House Nancy Pelosi, March 9, 2010

Pity the Democrats. They just can't get their message out. Not with a charismatic president (who has delivered 52 speeches on the subject), control of both houses of Congress, the gooey enthusiasm of 90 percent of the press, and more than a year of ceaseless agitation. Their efforts have been thwarted, so they imagine, by "misinformation," "distortion" and the "special interests." So influential are these dark forces that the leadership cannot shout over them. Speaker Pelosi must pass the grossly unpopular bill in order to get the peace and quiet she needs to explain its virtues.

In fact, on the most important variable about this legislation -- cost -- Americans see through the optimistic projections. Asked by Rasmussen whether the health care plan will cost more than currently estimated, 81 percent of voters said yes and 66 percent said it was "very likely" to exceed projections. Doubtless the Democrats can explain that Americans believe this only because they've been duped by lies and clever ad campaigns, not because 60 years of recent history demonstrate conclusively that government programs, particularly open-ended entitlements, nearly always exceed projected costs. In 1966, Medicare cost taxpayers $3 billion. The House Ways and Means Committee estimated that by 1990, we might be spending as much as $12 billion. The actual 1990 figure? $107 billion. In 1987, Congress estimated that the Medicaid DSH (disproportionate share hospital) costs would be less than $1 billion in 1992. The actual cost? $17 billion.

But since Pelosi is so eager for us to know the details, let's indulge her. Among the specifications of the House bill that passed last November are several sections that mandate racial and ethnic quotas for medical schools and other federal contractors. As Allan Favish reported in The American Thinker, the bill specifies that the secretary of Health and Human Services, "In awarding grants or contracts under this section ... shall give preference to entities that have a demonstrated record of ... training individuals who are from underrepresented minority groups or disadvantaged backgrounds."

This, along with other provisions, is broad enough to cover every medical, nursing, dental school and teaching hospital in the country and guarantees the institutionalization of racial, sex, and ethnic quotas in perpetuity (though the use of the word "underrepresented" before "minority" ensures that the quotas will not apply to Asians or Jews).

The rationale for quotas, insofar as there is one, is that African-Americans and Hispanics have, on average, poorer health than other groups. Liberals assume that these disparities are the result of discrimination or lack of access to health care rather than other factors like poverty, eating habits, heredity, and fitness. If medical and dental schools are required to admit more minority applicants, newly minted minority professionals will tend to those "underserved" populations.

Of course, medical and dental schools have been practicing affirmative action for decades, but they've had trouble recruiting large numbers of minorities. Part of the problem is that African-Americans do not tend to gravitate to math and science (the solution to which is to be found in families and schools). Still, for the past few decades, less-qualified minorities have been offered spots in medical schools, with the result that: 1) Those minority professionals who would have qualified without affirmative action bear a stigma, and 2) less-qualified minorities fail licensing exams at much higher rates than their classmates. Is it a service to the African-American or Hispanic communities to provide physicians and dentists who are less capable than others? Will it improve health outcomes to be treated by less-qualified professionals?

President Obama asked this week whether anyone could oppose "holding insurance companies accountable," and "bringing down costs for everyone." Funny, he doesn't ask whether we object to this: a provision on "maintaining, collecting and presenting federal data on race and ethnicity," in order to "facilitate and coordinate identification and monitoring ... of health disparities to inform program and policy efforts to reduce such disparities." That's an engraved invitation to social engineering.

But then, even to mention it is probably contributing to the "fog of controversy."