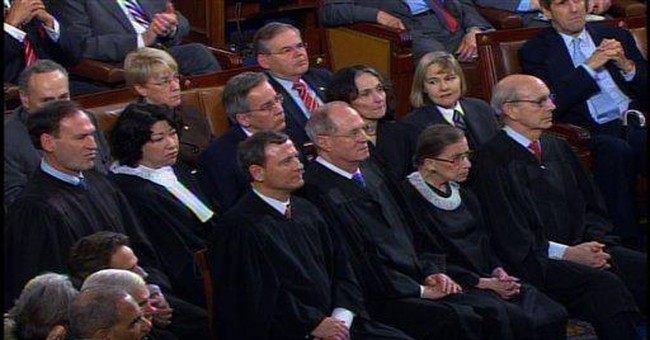 Asked by a radio host about the Supreme Court's decision in Citizens United v. FCC, Newt Gingrich said something that I imagine many conservatives have always believed -- that political contributions are a form of speech, and as such should be unlimited provided they are immediately disclosed on the Internet. That was my view.

But perhaps that was wrong. Not the speech part -- thankfully, even the Supreme Court has come to its senses on that score (the justices were reportedly scandalized to discover that the McCain/Feingold law permitted the banning of books under certain circumstances), but the disclosure part. Perhaps we are paying too high a price in political freedom to avoid the appearance of undue influence.

Professor Brad Smith, former chairman of the Federal Election Commission and a leading opponent of campaign finance (or speech limitation) laws, makes the case that disclosure, which most of us automatically associate with political virtue, may not be desirable after all.

Writing in City Journal, Smith begins with the following question: Suppose in its waning days, the Bush administration had proposed Patriot Act II. "To prevent terrorists and foreign agents from influencing American governments and political parties, the act would require political campaigns and other groups to report the names, addresses, and employers of their supporters to the federal government, which would enter the information into a database. The act would also give businesses access to this database, enabling them to make hiring decisions, credit determinations, and other choices based on political activity. Can anyone doubt that Patriot II would be widely considered a gross violation of civil liberties?"

That's putting it mildly. But Patriot II was not proposed by George W. Bush. It has been the law of the land for more than 30 years, since passage of a McCain/Feingold precursor, the Federal Election Campaign Act. Even the most fervent civil libertarians seem never to be worked up over the massive invasion of privacy that act inaugurated. Like proverbial frogs in heating water, we have tamely accepted the idea our political contributions must be disclosed. But don't political views and activities deserve an expectation of privacy as much as book purchases, voting habits, and income tax returns?

Well, say the law's supporters, it's not for the sake of intruding into private citizens' lives that we require disclosure of political contributions, but to ensure that corrupt influences on political figures are limited. If that's the rationale, Smith notes, then the thresholds for disclosure are ludicrously low. "People who donate $20 to a Michigan candidate or even $200 to a federal one will exercise zero influence on the candidate if he's elected."

As for large contributions from wealthy individuals, political action committees, or unions, the disclosure requirement carries significant and largely unexamined costs. One unrecognized consequence is the greater scope it gives elected politicians to intimidate donors. Remember the notorious "K Street Project" inaugurated by House Republicans when they took control of Congress in 1994? Using lists of contributors filed with the federal government, Republican leaders targeted the 400 largest PACs and demanded that they adjust their giving to reflect the new sheriff in town. The Democrats howled -- and then did the identical thing when they retook power in 2006.

Even more chilling is the intimidation that donors experience from others. In 2006, Gigi Brienza, an employee of Bristol-Myers Squibb, learned that her name and home address had been posted on the "hit list" of a radical animal rights group that objected to animal testing. They discovered Brienza's personal information courtesy of the federal government because she had donated $500 to the presidential campaign of John Edwards.

Richard Raddon, director of the Los Angeles Film Festival, was obliged to leave his post due to boycott threats after it was revealed that he had given $1,500 to the campaign for Proposition 8 (which defined marriage as between a man and a woman). Scott Eckern, longtime artistic director of the California Musical Theater in Sacramento, was forced to resign after it was learned that he had donated $1,000 to Proposition 8.

Even absent the fear of direct retaliation, many Americans may have reasons to keep their political contributions private. Surely some non-openly gay Americans would not welcome employers or insurers noting their contributions to Log Cabin Republicans or the Human Rights Campaign.

The Supreme Court has confirmed that limitations on contributions are curtailments of free speech. It's time to consider whether the chilling effect of excessive disclosure on free speech is worth it.