Obama's Moral Leadership Balloon Crashes -- No One Inside 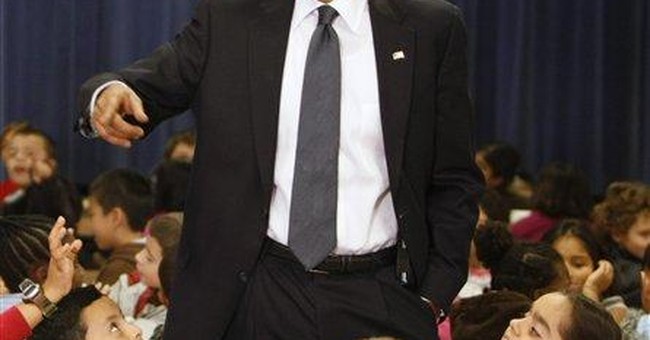 The world thinks better of the United States, we are told, because Barack Obama is in the White House. Maybe the world is wrong.

It's fanciful, of course, to speak of what "the world" thinks about anything. It's safe to say that among Norwegian prize givers and Canadian avant-garde filmmakers, Obama is extremely popular. And certainly among bien pensant Americans, the advent of Obama is viewed as the moral pinnacle of American history. It has always been a particular vanity of the left to believe itself morally superior to others. But the claims for this presidency have been beyond extravagant. Global human rights, morality, and justice took a "great leap forward" (as Anita Dunn's favorite political philosopher might say) on Jan. 20. But in the space of just nine months, the Obama administration has betrayed the cause of human rights around the globe.

Secretary of State Hillary Clinton helped set the tone in February by swatting away a question about human rights abuses in China. Those issues, she said, "can't interfere with the global economic crisis, the global climate change crisis, and the security crisis." Political prisoners, Tibetans, and religious minorities may have been dejected by this stony dismissal, but the Chinese government was delighted. "This type of realistic attitude could be followed by other Western leaders," an official newspaper noted with satisfaction.

Hundreds of thousands of Iranians endured teargas, bullets, arrests, and torture in an attempt to topple one of the most vicious and dangerous regimes in the world. Yet day after day, President Obama, moral beacon to the world, dismissed and even denigrated them. He was not going to allow a bunch of Democrats to interfere with his meticulously planned overture of friendship toward the mullahs. His condemnation of the violence and brutality of the regime was so tepid, tardy, and grudging that it amounted to tacit support for the government. Another blow to human rights and morality.

The people of Honduras, who have struggled painfully to achieve a successful democracy, threw off a would-be dictator who threatened to plunge the nation back to autocracy. Rather than help to solidify Honduras' devotion to its constitution, Obama (together with those well-known human-rights avatars Hugo Chavez and the Castro brothers) sided with Manuel Zelaya and imposed sanctions on the legitimate government. Which side better represents human rights and morality?

But surely on a matter as grave as mass murder, President Obama will not permit real politick or misplaced faith in diplomacy to trump human rights? Who can forget Sen. Obama's eloquent condemnation of the Bush administration for negotiating with the Sudanese regime? "I am deeply concerned," candidate Obama intoned, "by reports that the Bush Administration is negotiating a normalization of relations with the Government of Sudan that would include removing it from the list of state sponsors of terrorism. ... This reckless and cynical initiative would reward a regime in Khartoum that has a record of failing to live up to its commitments. ... Before we improve our relationship with the Government of Sudan, conditions must improve for the Sudanese people. We cannot stand down -- we must continue to stand up for peace and human rights." Why did the senator feel so strongly about it? Because "the United States has a moral obligation, anytime you see humanitarian catastrophes. ... And when you see a genocide, whether it's in Rwanda, or Bosnia, or in Darfur, that's a stain on all of us, that's a stain on our souls."

How are our souls looking today? On Monday, the Washington Post reported that that the U.S. "will shift its policy toward Sudan to one based on working with the country's government instead of isolating it." Whereas he had once demanded that "The international community must, over the Sudanese regime's protests, deploy a large, capable U.N.-led and U.N.-funded force with a robust enforcement mandate to stop the killings," the president now says that "If the government of Sudan acts to improve the situation on the ground and to advance peace, there will be incentives; if it does not, then there will be increased pressure imposed by the United States and the international community." Incentives? For Omar al-Bashir, the only head of state currently under indictment by the International Criminal Court for crimes against humanity? That threat of "increased pressure" must really terrify him. It's the fierce urgency of the kowtow.

Finally, by joining the Human Rights Committee of the U.N., President Obama has granted U.S. prestige to the howling claque of Israel and America bashers.

This is moral uplift?