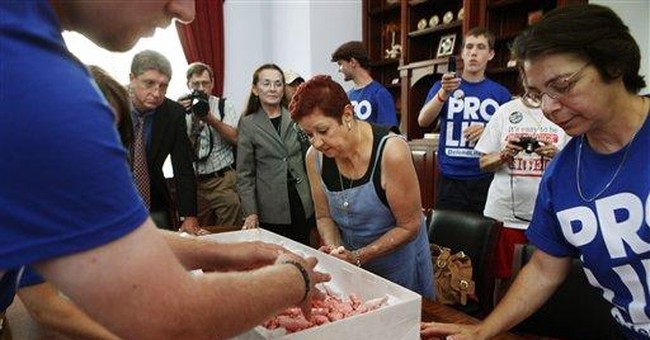 Well, thank Heaven George W. Bush is no longer president! Gosh, all of that mixing of religion and politics darn near subverted our Constitution -- which, as all good liberals know -- enshrines the "wall of separation" between church and state.

What? That phrase doesn't appear in the Constitution? No matter. Democrats know that conservative Republicans, particularly Christians, are dangerous religious fanatics.

When Democrats invoke the Almighty, though, it's altogether different. Religion in a Democrat is evidence of deep moral commitment, even greatness. Many of the eulogies to Teddy Kennedy mentioned his "quiet Catholic faith." His favorite parts of Scripture, we were told, were "Matthew 25 through 35: 'I was hungry and you gave me to eat, and thirsty and you gave me to drink.'"

The Democrats, perhaps as a political Hail Mary pass in light of the resistance health care reform has encountered, are now hitting the religion angle pretty hard. At a Tennessee fundraiser over the weekend (at which Bill Clinton arrived early -- a modern miracle if you're looking for one), the reunited team of Clinton and Gore pushed health care reform as a "moral imperative." Playing off the Kennedy eulogies, Gore invoked the Christian obligation to care for "the least of these" as the force behind H.R. 3200.

President Obama, too, has donned the preacher's mantle. Speaking to a coalition of 30 faith-based groups, he thundered that opponents of health care reform were "frankly, bearing false witness." He then offered a religious justification for his policy preference that somehow failed to make liberal Democrats uncomfortable about church/state entanglement. "These are all fabrications that have been put out there in order to discourage people from meeting what I consider to be a core ethical and moral obligation: that is, that we look out for one another; that is, I am my brother's keeper, I am my sister's keeper. And in the wealthiest nation in the world right now, we are neglecting to live up to that call."

But the president really hit his stride when he spoke by conference call to about a thousand mostly Reform rabbis, asking for their support of health care reform when they address their congregations at the upcoming High Holiday services. As Tevi Troy blogged on National Review Online, the Jewish New Year observance features a prayer called U'netana tokef which reads in part: "On Rosh Hashanah will be inscribed and on Yom Kippur will be sealed how many will pass from the earth and how many will be created; who will live and who will die ... but repentance, prayer, and charity can remove the evil of the decree."

According to Rabbi Jack Moline of Alexandria, Va., who live-blogged the event but later removed his Tweets from the Internet, President Obama referenced this prayer and then told the rabbis that "I am going to need your help" in getting health care reform passed. "We are God's partners in matters of life and death," the president added.

One cannot even fathom the sort of media firestorm that would have erupted if someone like Sarah Palin had said that. But beyond the blazing double standard, does President Obama really want to venture this deep into moralizing? This is treacherous ground for him. For one thing, a man who is already known for his messiah complex ought to choose his words more carefully. Religious people may think of themselves as striving to do God's will, but declaring yourself God's partner is a just a tad presumptuous. Besides, there are very good reasons to believe that Obama's health reform would lead to worse outcomes, not improved care. More particularly, the administration has recently been drawn into controversy (rightly or wrongly) over "death panels" and also over the Veterans Affairs department's endorsement of a pamphlet that seemed to encourage the elderly and frail to consider whether their lives were really worth extending and/or whether they were "a burden" to their families. In light of that, some may hear a degree of menace in the phrase "God's partners."

But above all, President Obama has previously told us that questions about life were "above his pay grade." He has now pivoted to claim that his health care reform is a matter of life and death. If he is now going to invoke religious authority, his opponents are entitled to recall not only that Barack Obama has a perfect pro-abortion voting record, but also that just a few years ago he spearheaded opposition to legislation that would have simply required that an infant who accidentally survived an abortion be given medical attention.