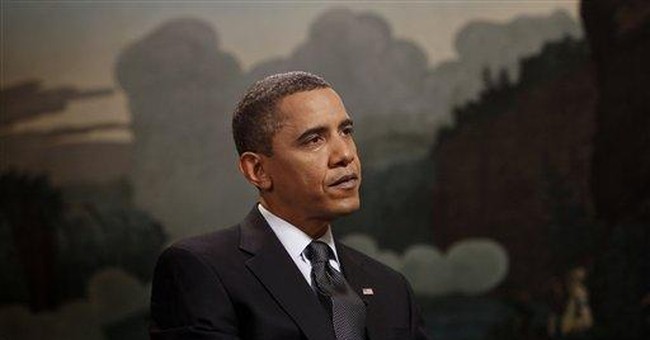 One of President Obama's pretensions is the pose of objectivity. Reversing his predecessor's policy on stem cell research, he boasted of restoring "science to its rightful place." Lobbying for his health care overhaul, he claims to advance "evidence-based analysis" as though opponents are relying on myth or superstition. And campaigning for the cap-and-trade energy bill, he declared, "We must not be prisoners of the past. Don't believe the misinformation out there that suggests there is somehow a contradiction between investing in clean energy and economic growth. It's just not true."

In reality, far from standing for empiricism, President Obama much more often fronts for a rigid ideology. He is new and fresh. The ideas he champions not only fail as an empirical matter, they fail even to pass the test of common sense.

Consider the Waxman/Markey energy bill that the president and Speaker Pelosi were able to squeak to passage in the House. This legislation, born of the liberal weakness for grandiose and world-shaking ambitions, promises nothing less than to save our planet from mankind's folly.

Leave aside for the moment that following a (mere) 30-year warming trend, global temperatures have flatlined since 2001; how in the world can the president argue that by making energy more expensive for American businesses and consumers, we are going to have any measurable effect whatever on the global output of CO2? As Peter Huber helpfully outlines in City Journal, "Carbon Econ 101": "We rich people can't stop the world's 5 billion poor people from burning the couple of trillion tons of cheap carbon that they have within easy reach." China, which has already passed the United States as the world's chief emitter of CO2, is adding 100 gigawatts of coal-fired electricity per year. That amounts to another U.S.A.'s worth of coal consumption every three years. The rest of the developing world is rushing to do the same. Brazil, Indonesia, India, and South Africa are burning coal because it is cheap and plentiful. And no one is even asking them to refrain because to do so is to ask them to remain poor.

The House of Representatives has passed a massive, complex, special-interest-pocked bill that will "invest" in green energy and according to Obama and Pelosi, create "millions" of green jobs. Over and above the jobs that are lost due to higher energy prices? This is not empiricism. This is fantasy. Mayor Bloomberg talked of seeding New York with windmills. Huber cites data. "Windmills are now 50-story skyscrapers. Yet one windmill produces a piddling 2 to 3 megawatts. A jumbo jet needs 100 megawatts to get off the ground ... Meeting New York City's total energy demand would require 13,000 of those skyscrapers spinning at top speed, which would require scattering about 50,000 of them across the state..."

Instead of data, the president offers humbug. The great genius of American ingenuity, he suggests, after receiving billions in government "investments," will create new technologies for extracting usable and cheap energy from wind, solar, and geothermal sources. But if those technologies are just a wish away, why have they not been discovered already by businesses hoping to undersell oil and gas? Note that nuclear power, the one "green" source that is empirically proven to provide relatively inexpensive power without producing greenhouse gases, is not even on the president's agenda. Is this returning "science" to its rightful place? Here's an irony: If the environmentalists had not so successfully blocked nuclear power after the Three Mile Island accident (which didn't hurt a soul), the U.S. would now be in compliance with the Kyoto Protocol targets for CO2 emissions.

Huber also makes the common-sense point that by making carbon more expensive for American consumers, we will reduce demand for it and thereby make it even cheaper for Third World nations to buy. Perhaps reflecting this reality, the Environmental Protection Agency acknowledges that under Waxman-Markey, emissions of CO2 will not be reduced by the year 2020.

The Waxman/Markey bill will have little to no impact on world production of greenhouse gases, which are supposed to be responsible for global temperature increases that stopped nearly a decade ago. This massive tax increase on energy will not harm the already weakened U.S. economy; it will strengthen it. Got that? Aren't you glad we have an empirical president?!